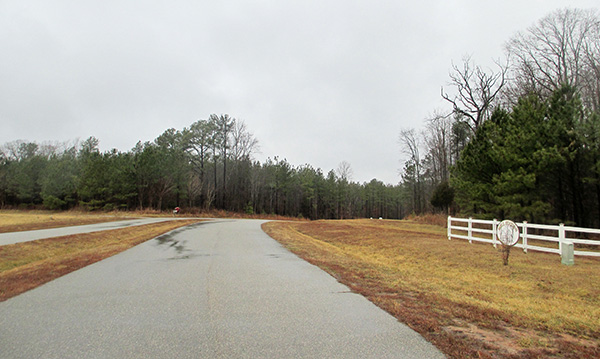 Around 200 acres of a Powhatan subdivision went back to the bank at a foreclosure auction Thursday.

Thirty vacant lots in the Mill Station neighborhood and a nearby 64-acre parcel were returned to C&F Financial on the steps of the Powhatan County courthouse. C&F now controls Central Virginia Bank, the bank that put the property up for foreclosure.

A bank representative would not comment Thursday. But Chip Bliley, an attorney with Williams Mullen and trustee for the foreclosure, said the bank would be willing to talk to people interested in making offers on individual lots.

The Mill Station lots, off Mill Quarter Road, had been owned by BCJ LLC. County records show PABC Inc. owned the 64-acre parcel, which is off Red Lane, near Route 60. Developers James Blandford and Robert Hertzler were behind both companies.

Powhatan County Circuit Court records show that in December, Central Virginia Bank won a judgment against BCJ LLC in the amount of $2.82 million. The bank postponed a February auction date.

Blandford previously said they purchased the land for Mill Station in 2006. The development took off quickly, then slowed dramatically during the economic downturn, he said. Sales were starting to pick back up last year. But by then, the bank had already started the foreclosure process, he said.

Blandford said they tried to save the property but couldn’t reach a deal with the bank. He declined to comment when reached by telephone after the auction Thursday. 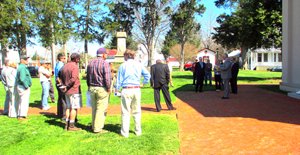 A group gathered at Powhatan County’s courthouse Thursday for the auction. (Photo by Brandy Brubraker.)

Fred Shaia was one of the bidders for the 30 lots. He said he developed Woodside Estates, a subdivision in Ashland and was interested in Mill Station – just not enough to outbid the bank.

“I think it’s a beautiful piece of property,” he said.

Thursday’s auction was to include 34 Mill Station lots, but four recently sold.

According to county records, the properties offered at auction total about 200 acres and have a land value of more than $3 million.

Many of Mill Station’s 71 lots have already been sold and built on. A sign at Mill Station said homes there start in the mid-$300,000s and are constructed on two- to 13-acre lots.