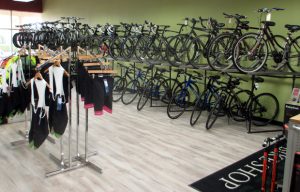 A year after expanding into Carytown, a longtime bike shop chain is peddling for the first time on the Southside.

“I have over 2,200 clients on the Southside that have been doing business with me in Richmond,” Conte said about opening in Midlothian. “It allows my clients to not drive 35 miles to come see me.”

“It’s always been in our master plan of expansion to have three or four stores in the Richmond marketplace,” Charles Conte said.

Conte signed a five-year lease for the 2,000-square-foot Midlothian shop. The property in Alverser Plaza was previously occupied by Richmond Computer Guy, which changed its name to Cloud Managed Services and consolidated its operations at 11575 W. Broad St.

More Richmond stores are in the works in “the very near future,” Conte said, though he wouldn’t specify when and where they might be. The company does have a new store slated for 2015 in Newport News.

With plenty of bike shops and giant retailers competing to sell bikes, Conte said repairs and service determine which shops get return customers.

“The market here is really oversaturated for the population, but there’s a lot of opportunity that exists on the service side,” Conte said.

Conte said opening a new shop typically costs from $300,000 to $500,000 for the company. The new store has seven employees. Emily Pongonis, who previously worked at the Short Pump location, will manage the new shop.

Meanwhile, in the Fan, startup Lucky’s Bicycles has relocated from Mechanicsville to 708 N. Meadow St. Owners Fallon Cecil and Klaas Versluys reopened the shop on April 8.

Cecil and Versluys first launched Lucky’s in January 2013 at 6995 Cold Harbor Road in Mechanicsville. The former VCU students signed a three-year lease for the space in the Fan.

“We got a really good deal here,” Versluys said of the Fan property. “We live in Richmond. It’s easier for us to commute, and there are more people who ride bikes.”

At 850-square-feet, the new location is twice the size of their previous space. The North Meadow Street site was previously home to a floral shop.