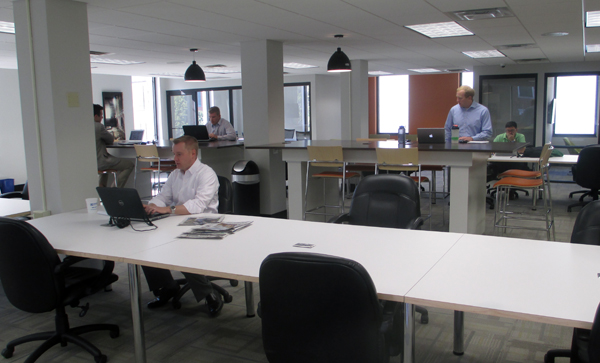 Two shared office-space concepts – one that operates much like a gym membership for businesses and the other which offers offices as small as 85 square feet – are trying to tap into the downtown market.

Gather, a co-working space, opened this month at 409 E. Main St. It features 10,000 square feet of co-working space complete with one-day trial passes and a small gym in the basement.

Independent contractors and solo business owners pay a month-to-month $250 fee to gain access to a large open space, a small conference room and the printer.

Gather also offers desks at $350 per month and glassed-off, enclosed offices for $500 per month. The building’s owners said they hope the setup will be a collaborative space and an incubator of sorts for startups.

“You want low overhead, but you don’t want to be lonely when you’re starting your own business,” said Andy Beach, one of the owners of the building and of Gather. “You want to be around people that are doing the same thing.”

Gather takes up the ground floor of the building owned by Beach and Jeff Bunch, his partner in Urban Core Development; Duke Dodson of Dodson Property Management; and Doug and Polly White of Whitestone Partners.

The concept now has 20 members and will stop selling memberships when the space starts to feel full, Dodson said. He thinks it can accommodate at least 100 members.

Dodson said the idea for Gather came from his experiences launching Dodson Property Management, which recently moved out of its former Floyd Avenue office.

“At first, I was paying was more than I needed to pay, but by the end of the first year we had grown out of it,” he said.

Further east on Main Street, a giant of small office spaces has opened shop in a downtown office tower. Regus, a multinational business with three previous Richmond locations, is renting one-, two-, three- and four-work station offices out of 15,000 square feet on the 10th floor of the SunTrust Center at 919 E. Main St.

Regus rents offices and conference rooms by the hour and by the month. Its 85-square-foot to 160-square-foot offices come furnished with phones, desks and chairs and start at $499 for a small interior office.

“All of our offices are for sale, even mine,” Combs said.

Regus has 1,800 locations worldwide and has been in Richmond since the early 2000s, when it opened its first location in the Boulders office park. The company added another at Two Paragon Place in 2008 and on Sadler Road in Glen Allen last year.

In addition to micro-office space, Regus offers a virtual office package for $219 a month. It includes phone answering and mail collection and forwarding services, which allows clients to boast a downtown, financial district office address without physically having to be there.

The virtual office service is useful for businesspeople who work from home, Combs said.

“You don’t have to worry about the kids answering the phone when they’re home for summer or spring break, or the dog barking in the background,” he said.

Good luck Duke. It is a good idea and a great space you have there.