The Richmond market is in the running to land a massive new facility in the works by a big-name West Coast brewery.

California-based Stone Brewing Company is looking to build a multi-million dollar brewery, restaurant and retail operation that will serve as its East Coast hub.

The company confirmed last week that Richmond is among the markets it is visiting as a potential home for the project.

“We’re looking at a variety of cities,” said Sabrina LoPiccolo, a spokesperson for Stone Brewing. “Richmond is on the list, but there is a variety of other locations.”

Launched in 1996 by Greg Koch and Steve Wagner, Stone is the country’s 10th largest craft brewery, according to its website.

The company is looking to spend more than $20 million dollars to outfit its planned East Coast site, according to project specifications and a request for proposals on its website.

Stone is looking for a building of about 130,000 square feet that can be expanded to 220,000 square feet, or for land that could hold a structure of that size. The site would be home to Stone’s brewery operations, a restaurant with indoor and outdoor seating, a bar and retail areas. The ideal property would have on-site parking. 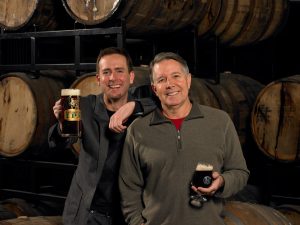 Stone projects revenue at its East Coast site to exceed $100 million in its fourth year and eventually reach hundreds of millions annually. The company currently employs more than 875 people.

Stone’s interest in Richmond was first reported by NorfolkMetro.com. The site reported that 10 cities are under consideration as potential sites for the facility including Norfolk, Roanoke, Philadelphia and Charlotte.

It’s unclear where in the Richmond region the company might have an interest. Stone did not comment on specific sites.

If Stone wanted to repurpose an existing building, Braun said he might point them towards the Philip Morris Operations Center near Interstate 95. That property has more than 570,000 square feet of space and was listed for sale last year.

Rumblings of Stone’s interest have been going around area economic development circles.

“We know they’re looking and it’d be great to have them here,” said Will Davis, director of Chesterfield County economic development.

Davis wouldn’t say whether the county had spoke with anyone from Stone Brewing.

The Virginia Economic Development Partnership, the state-wide organization that works to lure businesses to the commonwealth, didn’t comment specifically about Stone’s interest in Richmond either.

“We can’t comment on any active projects,” said Tim Danielson, a manager for business attraction at VEDP. “There’s certainly craft brewery activity on the East Coast.”

I sincerely hope that the City offers these guys no more than what they’ve already offered to Legend and Hardywood (just to name two).

If the Henriofielders want them, they can have them. But if the city offers incentives to out-of-towners who are coming here to compete with guys who’ve built local businesses out of nothing? That would be an inexcusable slap in the face.

On the other hand, Pat, if the City can find an empty building of 130K-220K sf and put it back to use for employment opportunities, then it will be a net gain for us all. Legends, Hardywood, etc. have a loyal following for their unique quality products. They’ll continue to do just fine and perhaps one day will need to expand into larger spaces.

There’s no guarantee that this firm will be coming to this region or even to this state. This is competition for a good industrial employer.