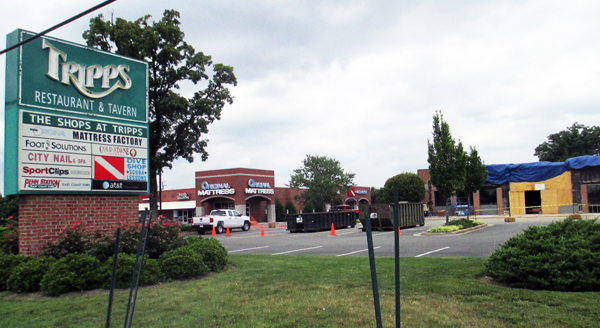 A North Carolina-based restaurant chain is working on a multi-million dollar rebrand of its location in Richmond’s West End.

Battleground Restaurant Group has closed its Tripps Restaurant at 9318 W. Broad St. to transform the eatery into a Kickback Jack’s, the company’s other restaurant concept.

Tom Mincher, president of Battleground, said he expects the location to reopen in August as the company’s seventh Kickback Jack’s. He plans to spend more than $2 million to renovate the property.

“We have the capital to finance it,” Mincher said of the changes. “It’s basically going to be a new building.”

Mincher said new development nearby and an influx of other restaurants motivated the move away from Tripps, which he opened in 1994. 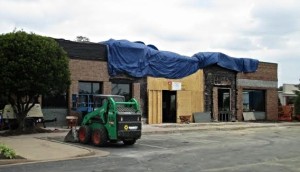 Tripps Restaurant is closed until August its conversion to Kickback Jack’s. Photo by Michael Thompson.

“We’ve seen a deterioration in our sales since 2008,” Mincher said.

Battleground has owned the building since 1992, and Mincher owns the surrounding retail plaza, The Shops at Tripps. The land used to be a dairy farm.

Kickback Jack’s is a sports-themed restaurant with a broader menu and lower prices than Tripps. The Kickback Jack’s brand was launched in 2008 with a location in Danville, Va. Five other locations have since opened in North Carolina.

“We’re looking to add sites in the Richmond market to build the Kickback Jack’s brand,” Mincher said. “I think as we move forward, we’ll be looking at other cities in Virginia.”

The shift does not mark the end of Tripps. Battleground still owns two other Tripps in Virginia, one off the Midlothian Turnpike and the other in Virginia Beach, along with nine more in North Carolina.

Mincher opened the first Tripps in 1981 in Greensboro, N.C. Battleground also has a third brand called Casual Jack’s, with one North Carolina location.

Please keep the awesome bread and some of the Tripp’s menu items too!! I loved Tripp’s and the food!

As far as I’m concerned, this was a big mistake. It’s not like Richmond doesn’t already have a bazillion sports bars already. (sigh) Everything I’ve ever ordered there was really good and the price was reasonable. Why do people insist on “fixing” what isn’t broke? There’s nothing here in the west end like it now nor anything as good. At least I can still go to the one on the south side so I’ll be making more trips from Short Pump over to Midlothian.

I, too, will be going to the Midlothian location of Tripp’s. I don’t care for the loudness of a sport’s bar. I want a refined and dignified restaurant like the Tripp’s that used to be on Broad St. What a mistake to bulldoze such a wonderful restaurant.The menu was fantastic. The food always excellent. You would have been wiser to move the location further West such as the Short Pump area. Steak and Ale was another very fine restaurant that is sorely missed. There again, location, location, location. I want Tripp’s back on this side of the James River. Just… Read more »

Tripp’s closed I am so disappointed. The food was awesome the bone in rib eye mouth watering. The service the best. What a mistake there wasn’t another place like it on Midlothian turnpike.

I truly loved Tripp’s as well. What a shame…. From what I hear, the same as West Broad St. The Midlothian location is gonna be a Kickback Jacks as well…