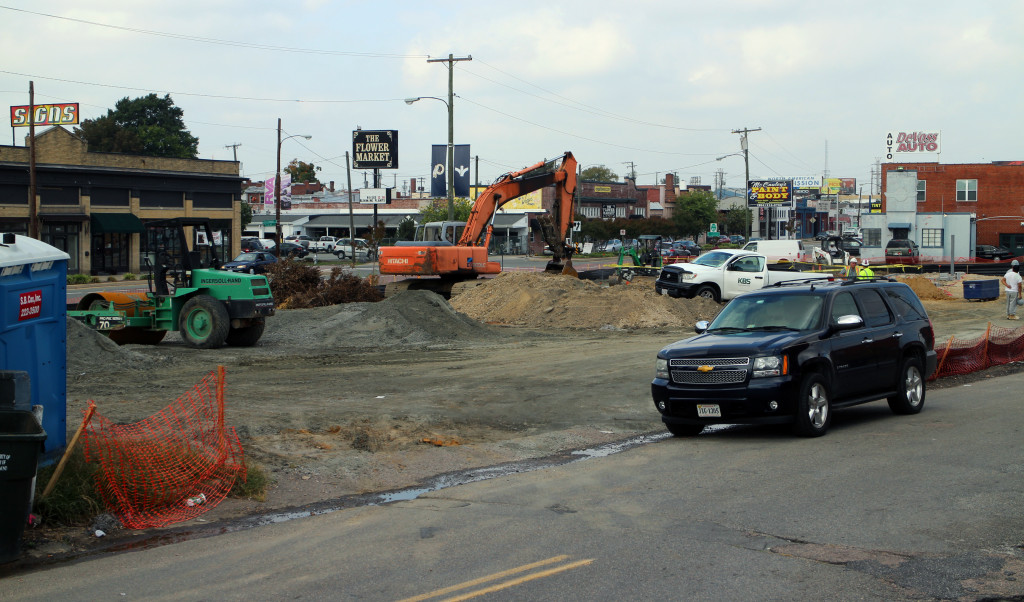 Construction is underway on Boulevard. Photos by Michael Thompson.

A Fan landlord is pushing farther down the Boulevard.

Developer Charlie Diradour said he has lined up a Starbucks and a new beer retailer at 1017 N. Boulevard.

“I’m glad to be investing in the city again,” Diradour said. “We need more developers to be doing one-offs on the Boulevard.”

The Boulevard Starbucks will have seating as well as a drive-thru window. Plans include 23 parking spaces.

And next door, Reed Carter plans to open Growlers to Go in December.

“I saw a concept like this in Georgia and South Carolina – small stores that focused on draft beer in growlers,” Carter said. “I thought, ‘God what a neat idea.’”

Growlers to Go plans to have 55 beers on draft and 150 different kinds of bottled beer. The shop will have a limited wine selection along with non-alcoholic drinks (like root beer) on tap.

Carter, 67, said he expects to spend less than $200,000 to open. And he’s financing the venture with a loan from Bank of America and savings. 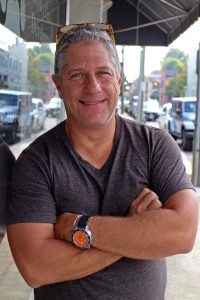 Diradour has been growing his holdings on the Boulevard. In 2012 he bought the property formerly home to Triangle Book Store and now occupied by the Mexican restaurant En Su Boca.

Diradour, 50, said development will cost $1.2 million and is being financed by Union First Market Bank. Bill Pantele handled lease negotiations for the property. KBS is doing the construction, and Johannas Design Group designed the space.

“I’m the guy who does these one-off deals,” Diradour said. “I’m really happy to be there as the wave starts to rise.”

Diradour has done business with Starbucks before. He owns a location at 5802 Grove Ave. that opened in 2007, and earlier this year nabbed a drive-thru only Starbucks in Oklahoma City.

Diradour sees his development projects on N. Boulevard as a way of connecting the Fan and Northside. His company Lion’s Paw Development owns a slew of retail and restaurant properties in the Fan and Near West End including the buildings occupied by Kuba Kuba, Pearl Raw Bar and Paper Plus.

“I think that in the end it is so important to give people in the Fan, Northside and Scott’s Addition options so that Henrico isn’t the destination,” Diradour said. “The Boulevard is the destination.”

Charlie you have done it again. The right use for the next great economic development location in RIC. I’m LovingBLVD and can’t wait to have a cup p Joe at your new spot. Then let’s go see a ballgame up the street!

The turnaround on the Boulevard during this post-recession period has been phenomenal. Its great to see Charlie adding some interesting retailers to the mix.

Reed Carter, what a great idea. I’d love a far more central location to get a growler filled from. As much as I enjoy the local microbrews, I quite simply am not driving all the way to Rockville or Ashland for a growler. Boulevard? Oh yeah, I can manage that…. I hope a little competition brings the price of a growler down just a peg or two, the equivalent of a $16 six-pack is a little off-putting next to a bottled six-pack of (fill in your favorite bottled microbrew) for $10 that does not need to be consumed within a… Read more »

Great news! Richmond needs to encourage economic development rather than sending it out to the counties. The City loses significant revenue and stunts job creation when it fails to support projects like the upscale Pear St. condos.

Great work Charlie. Leave it to the private sector and the Boulevard will be continue to be transformed.