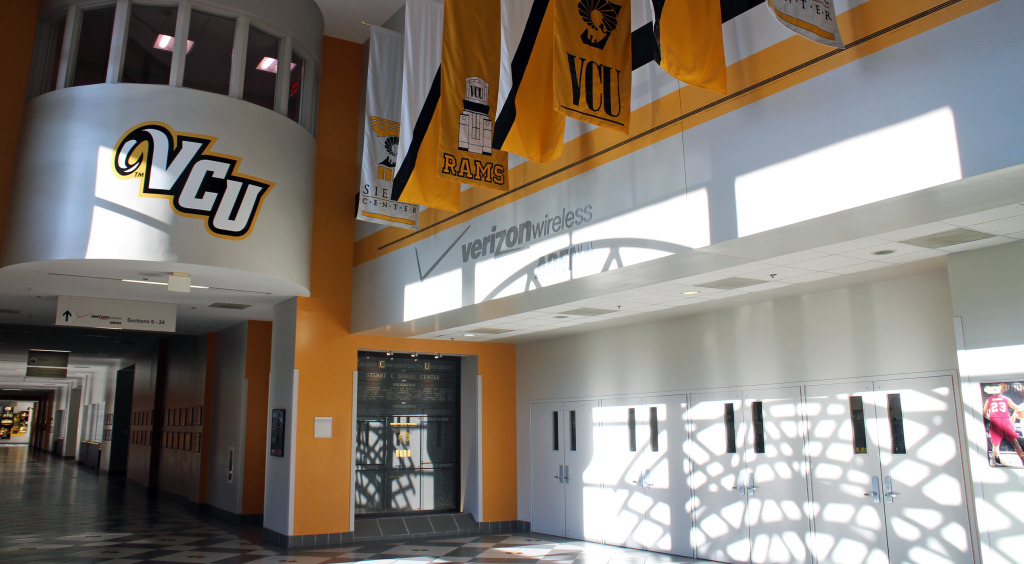 VCU’s Siegel Center will be packed for the men’s basketball game against UVA next weekend. Photo by Evelyn Rupert.

Unless you were a student or a season ticket holder, there wasn’t much time to get a ticket for the highly anticipated Dec. 6 men’s basketball game between Virginia Commonwealth University and the University of Virginia at the Siegel Center.

“Those were sold out in literally 10 minutes,” he said.

But die-hard fans can still find a seat for the game in most sections of the arena – as long as they’re ready to drop big bucks.

The secondary ticket market is flush with ticket holders willing to unload their seats at the Siegel Center at hefty markups as the game approaches.

As of last week, around 180 tickets were for sale on online ticket marketplace StubHub for the Dec. 6 game. The cheapest tickets for the game were a pair of standing room only spots at the back of the arena for $165. An actual seat was going for at least $249, and asking prices for courtside seat were going for $600 to $800 apiece.

Ari Klestzick, part-owner of Richmond-based ticket resale company AJ Tickets, said factors like the quality of the teams, face value of the ticket, dates and even the weather can affect the ticket resale market for any particular game, concert or event.

There’s plenty of hype around each team this year. The Cavaliers and the Rams are both top-25 nationally ranked teams. The game is on a Saturday and will be broadcast on ESPNU. It’s the second installment of a home-and-home series that started when VCU traveled to Charlottesville last winter. 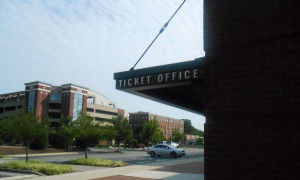 Tickets to the UVA game sold out in just a few minutes. Photo by Burl Rolett.

Both teams were also ranked in the top 25 when they met last year. ESPN reported the game was the first sold-out basketball game at UVA’s John Paul Jones Arena since 2007. The JPJ holds almost 15,000 people. Capacity at VCU’s Siegel Center is only about 7,500.

In this case, ticket scarcity is likely the overwhelming factor driving up prices, Klestzick said.

Season ticket holders take up a large chunk of the available seats, and then the university allocates tickets for students as well as fans from the opposing team.

That left only 132 single-game tickets that were offered for sale for the VCU vs. UVA matchup. Season ticket holders got first dibs on those and gobbled them all up quickly. Normally, single tickets would be sold to the public after season ticket holders make their purchases.

So in a sold-out game, less than 3 percent of the seats are up for grabs on StubHub, pushing the price well beyond the $55 VCU charged face value.

“If everybody who bought a ticket was reselling that ticket, then everyone would have a race to the bottom,” Klestzick said. “But in this case, you only have 180 tickets for sale, even if every buyer was going as a single, that’s only 180 orders.”

Klestzick said fans of a particular team usually make up about half of secondary market sellers, with the other half coming from brokers that buy with the intention to flip the tickets for a profit. Fans may list their tickets for sale because they can’t go to a certain game or they own a bundle of season tickets and want to sell a hot seat to make back some of the cost of the season package.

VCU’s Hofmann said next week’s game is the most exciting regular season basketball game played in Richmond for as long as anyone in the VCU athletic department could remember.

VCU responded accordingly, charging a premium for the 132 single-game tickets released for sale. The tickets went for more than double the regular $25 rate for most other home games on VCU’s schedule.

Hofmann said that even at $55, VCU may have charged far less than the market value for the tickets.

“We’re a top 25 program for basketball, and we do feel to some extent that we are justified in charging what our competitors in the top 25 charge,” he said. “But we don’t want to overprice our tickets. We feel like we’re a major part of the community, so we want to keep tickets affordable.”

The disparity between face value and secondary market value doesn’t necessarily mean VCU is leaving money on the table. The price listed on most non-student tickets is not indicative of what a buyer actually pays to get in the building.

About 95 percent of the non-student tickets for men’s basketball go to season ticket holders, Hofmann said. VCU season tickets are sold out, and there’s a now a waiting list 500 spots long.

VCU’s 2-year-old Seat Equity Plan requires fans to donate to the athletic department’s fundraising arm before they can buy a season ticket package.

The best seats go to the biggest donors, and those donors buy their tickets separately at face value after making their donations.

VCU projected that the first few rows of the middle sections would go to fans who gave at least $7,500 to the Ram Athletic Fund, with the required donation level gradually decreasing for seats higher up and farther from center court.

Divide that $7,500 donation by 17 VCU home games, and the school would have brought in $440 a game for each premier seat. And that figure still does not include the face price of the actual ticket.

Since VCU instituted the donation system, Hofmann said donations to the Ram Athletic Fund have skyrocketed to more than $3 million annually from a previous high mark of about $1.7 million.

Hofmann said most of the jump could be credited to basketball season ticket donations.

The VCU athletic department is starting to keep an eye on the secondary market for Rams tickets, Hofmann said.

At this point, VCU does not have any plans to try to control the secondary market for VCU basketball tickets. Hofmann did, however, ask Rams fans to keep the tickets in the herd.

“I think our feeling right now is, if someone buys a ticket they are entitled to do what they want to do with that ticket,” Hofmann said. “But if they do decide to sell them, we hope they are being bought by VCU fans.”

The Rams basketball program has galvanized the VCU campus, and that has had a positive affect on the City’s real estate market. VCU’s growth is the driving force behind the real estate boom, enhanced by City Council actions on the real estate abatement and the historic tax credits from the state and feds. I’m a VCU Ram fan for every game but one this year (Go Hoos!) and admire the job that Coach Smart has done with this program.

Based on that logic, the Redskins moving their training camp to Richmond should be having a negative impact on the local real estate market….

It is ILLEGAL to sell tickets more than their face value.