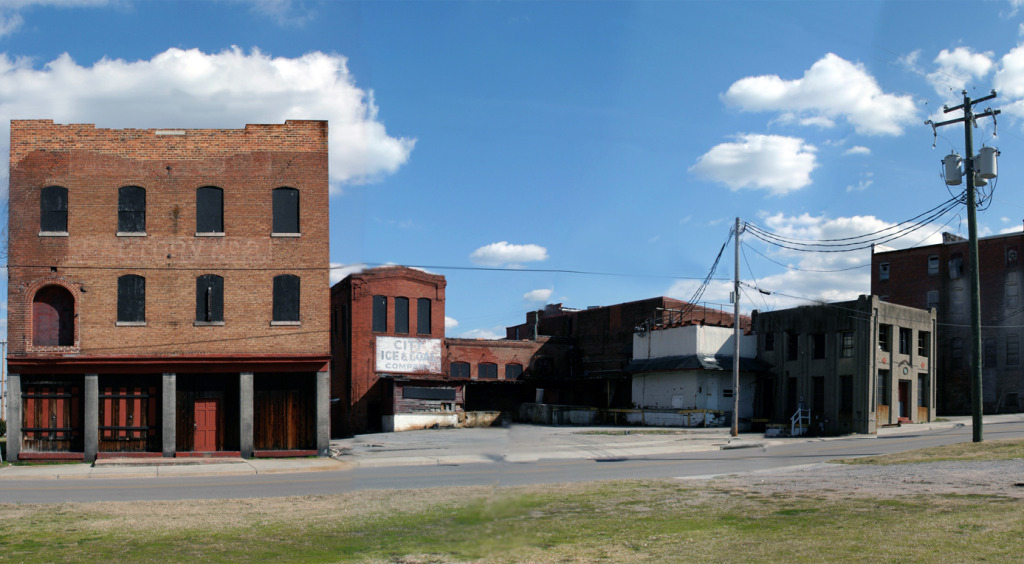 A brewery and apartment building are in the works along Third Street in Old Towne Petersburg. The three-story building to the left is slated for the apartment project, and the rest of the complex will be the brewery. Photos courtesy of Waukeshaw.

McCormack, who owns development firm Waukeshaw and Demolition Coffee in Petersburg, plans to spend $2.5 million to develop the brewery project with the hope of opening by late 2015. It’s being financed by First Capital Bank and an SBA loan from Crater Redevelopment Corp.

“Petersburg in general is greatly underserved,” McCormack said. “There’s still a large population down here that’s going to support this in a major way.”

McCormack said Waukeshaw has done about $35 million in development in Petersburg since 2008 and has owned the Trapezium property for about five years. 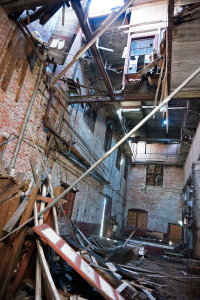 Renovations to the brewery and apartments will cost a combined $4.5 million.

Construction on the brewery is scheduled to begin in April and is expected to take nine months, McCormack said. Haase Inc. is the contractor on the job, and StudioAmmons is the architect. The project will seek historic tax credits.

On the same parcel as the future brewery, McCormack plans to spend $2 million to develop 18 apartments that will break ground right around the same time as the brewery.

“We certainly hope that is a draw for people,” McCormack said of the proximity to the brewery. “For a lot of these old buildings, we have to get creative with the development plan to monetize the square footage.”

McCormack said he got the idea to develop a brewery from Blevins, who worked as a sale manager at local distributor Specialty Beverage for 11 years.

“He just approached me out of the blue,” McCormack said.

After working in the restaurant industry and then in beer distribution, Blevins said opening a brewery of his own seemed like a natural progression.

He said to his knowledge, Trapezium would be Petersburg’s first brewery in more than 80 years.

“I knew Dave (McCormack) had all those properties down there, and I needed a building to put a brewery in,” Blevins said. “Petersburg is up-and-coming. It’s definitely been trying to attract a young, hip, artistic crowd.”

Frazer is an accomplished home brewer, Blevins said. That skill, combined with Blevins’ knowledge of beer distribution will be an advantage for the new brewery, he said.

“I started in 2001 when no one wanted to buy craft beer,” Blevins said. “My brewer and I have been working on recipes for more than a year.”

Trapezium hasn’t yet signed on with a distributor, and Blevins said the company is focused on getting up and running before thinking about getting his brew on store shelves.

As for the name, Trapezium, Blevins said it is inspired by a building in Petersburg built in 1810.

“The man who built it was led to believe if the house was built without any right angles he could ward off the evil spirits,” Blevins said. “And Dave thought it was a cool word.”

Blevins said he is confident opening a brewery outside of Richmond’s main craft beer scene because beer fans like to travel. Midnight Brewing and Lickinghole Creek have blazed the beer trail locally by opening off the beaten path in Goochland County.

He said he also sees opportunity once Stone Brewing Co. opens its highly anticipated facility in the city.

“All the ships are going to rise with the tide once they come,” Blevins said. “Stone is going to bring a massive amount of beer tourism. People are going to travel from all over the East Coast to visit Stone, and hopefully they’ll visit us too.”

What a great name! Wishing you great success!

Dave McCormack is a great guy doing wonders for the City of Petersburg. Be sure to check out Buttermilk Bake Shop next to Demolition Coffee as well! Just opened and really liked what I tasted!

Good luck with a brewery. Richmond has soo many brewery’s, so what market share can Petersburg hope to capture?

What a cool project. I’ll look forward to visiting in the future. I haven’t been to Petersburg yet, and visiting Trapezium sounds like a perfect excuse!

Thanks for the good word on our project. Indeed, the rising tide floats all boats.

Greg, thanks for checking us out. Anytime you or your team want to take the 20min trip down to Petersburg we would love to have you. Thanks for choosing RVA, and we look forward to seeing you in the future!

Hope for much success and encourage more businesses to look to Old Towne Petersburg as a great place to start up or expand.

This is exactly what Petersburg needs! As a home brewer myself, I am excited to see what this has in store for my home town. Adding a PVA Home Brew Club would be a great addition!

Always hoped a brew-pub would be built in the octagon-shaped building downtown, but I’ll certainly be happy with any new brewery. Best of luck.

(Full disclosure: I work for Dave Mccormack.) But just as a person who works in Petersburg, I am so excited that we are getting our own brewery! I think the city of Petersburg and the surrounding counties are going to benefit greatly from this. I personally cannot wait to have a new place to grab a beer after work.