The vacant former home of Armstrong High School is being floated for redevelopment.

A massive redevelopment project in the East End just cleared its first hurdle.

The Richmond Planning Commission approved preliminary plans on Monday for up to 300 new residential units for the old Armstrong High School site outside the Creighton Court neighborhood in North Church Hill.

According to the plan, spearheaded by the Richmond Redevelopment and Housing Authority and Boston-based nonprofit developer The Community Builders, the 21-acre, city-owned Armstrong site would feature a minimum of 50 single-family homes, 140 units in stacked town homes and 110 apartments.

The plans are the first step in a much larger undertaking.

Creighton Court, bounded by Nine Mile Road, Interstate 64 and North 28th Street, has 504 public housing units. The revitalization project will increase the total number of units to between 1,300 and 1,500, which will be a mix of market-rate homes and units targeted at lower-income residents.

Those units will be spread across more than 50 acres, including both the Armstrong site and Creighton Court, in a mix of multifamily and single-family homes.

“As a vital component of the East End transformation and through the proposed vision at the old Armstrong school site, our goal is to create a high-quality, mixed-income community,” Community Builders Senior Project Manager Colleen Bonnicklewis told the Planning Commission on Monday. 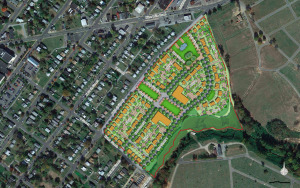 See the plans for the site (PDF)

Community Builders became involved in the project after the RRHA released a Request for Qualifications (RFQ), seeking a master developer to embark on a major project to revitalize parts of the East End.

That initial request included massive plans to start revitalization in both Creighton Court and Whitcomb Court. Douglas Dunlap, the city’s deputy director of planning and development review, said because of the scale and scope of the proposed project, focus has first been placed on Creighton Court and North Church Hill.

“When looking at public housing, having 500 units all developed together does not give you the best outcome and does not allow for the best quality of life,” Dunlap said.

The RFQ says that North Church Hill has a poverty rate “more than triple the state and national rates and a Very Low Income rate of 45 percent.”

“It should not be controversial to acknowledge that concentrations of poverty are bad laboratories for enabling people and families to reach their full potential,” Fossi said.

Once redevelopment of the Armstrong site is completed, it will potentially serve as an area in which current Creighton Court residents can permanently relocate once work at Creighton begins.

The Armstrong site sits catty-corner to the Creighton Court neighborhood across Nine Mile Road. It is divided into two parcels, one owned by the city School Board and the other by the Parks and Recreation Department. The proposed plan would demolish the vacant school building.

In addition to the residences, the proposed Armstrong development will include a 20,000-square-foot community facility, as well as an Armstrong Memorial Garden. An additional 1.2 acres are to be reserved for a “formal open space” that will include two playgrounds.

Community Builders is working with architect Torti Gallas and Partners, as well as the Timmons Group. A general contractor has not yet been selected.

Parking spaces are limited in the Armstrong neighborhood, with an average of less than half a space per unit. The development team told the Planning Commission that residents are expected to have fewer vehicles, especially those living in planned age-restricted units.

It is too early to say if the Armstrong land will be purchased from the city or if a long-term ground lease will ensue. Bonnicklewis said in the case of a sale, a partnership between The Community Builders and the RRHA would likely be the buyer.

The latest city assessments valued the land at a combined $415,000.

If city council approves the Armstrong project, the next step will be to secure financing through low-income housing programs and potential loans. If financing goes according to plans, construction could start in early 2016.

Founded in 1964, Community Builders has worked on several similar projects, including one in Norfolk. It currently supports 103 properties along the East Coast.