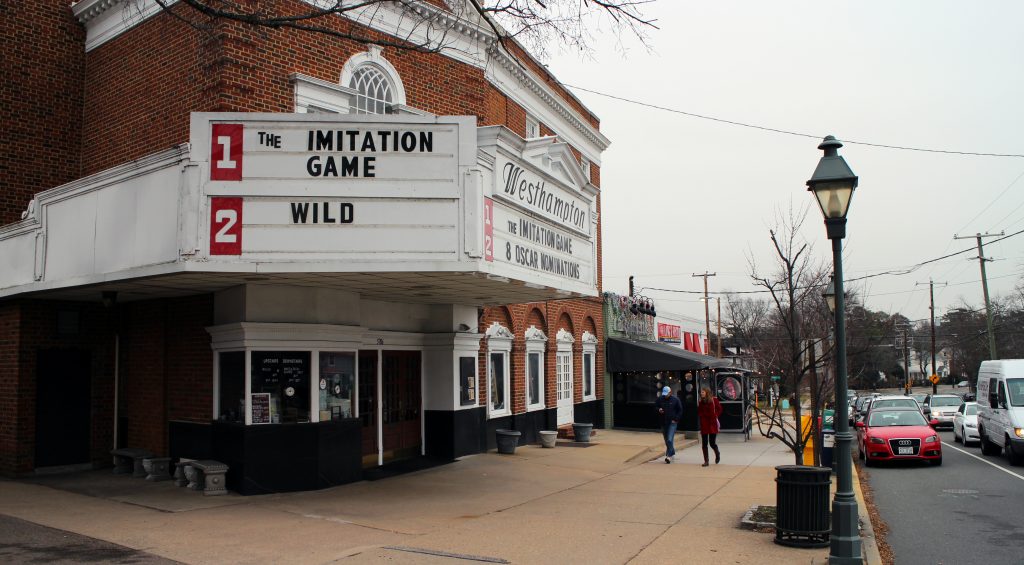 The Westhampton Theater at Grove and Libbie avenues and a neighboring office have been sold. Photos by Evelyn Rupert.

The curtains are set to close on a longtime West End movie theater.

The Westhampton Theater at 5706 Grove Ave. will close at the end of this year as new owners, who quietly purchased the property last spring, consider their options for the future of the 77-year-old movie house.

The property was sold to the Cametas family for $1.75 million in March 2014 through their real estate holding company Westhampton LLC. It had been owned by Regal Cinemas, which still operates the two-screen theater but has plans to shut it down.

According to a statement, the Cametas family has enlisted broker Jason Guillot of Cushman & Wakefield | Thalhimer “to explore its options in light of the news that Regal Cinemas will be winding down operations.”

“In the coming months, we plan to engage the surrounding community, including neighborhood associations and area businesses, and the City to develop a plan for the property that honors the historical significance of the Westhampton Theater and the Libbie and Grove corridor,” the statement continued.

Guillot did not expand on any additional plans the family may have in store for the 14,500-square-foot theater and its 1.3 acres. But it seems they’re not done snatching up real estate on that block of the coveted Libbie-Grove corridor.

Last week, the family also closed on the purchase of the Long & Foster office two doors down at 5702 Grove Ave. It paid $2 million for the 6,300-square-foot office through Westhampton LLC. 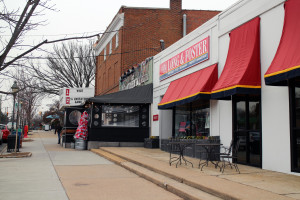 Westhampton LLC spent $2 million on an office near the theater.

The properties are separated by the Continental Westhampton restaurant at 5704 Grove Ave. That property is not owned by Westhampton LLC.

The Cametas family includes the late Dr. John Cametas, who founded Richmond’s Pembrooke Occupational Health in 1989. His son, Stefan Cametas, is the company’s president. Pembrooke now operates as eScreen Inc., a firm it merged with in 2010.

As to the decision to wind down operations of the theater, Regal spokesperson Russ Nunley said the Westhampton, known for playing alternative, independent films, has been considered underperforming for at least four years

“It has not been pulling its weight,” Nunley said. “That’s not unusual for two-screen theaters.”

“We’re working in reality,” he said.

There is no set closing date for the Westhampton Theater yet. Nunley said if the new owners have a need for the property to close earlier or later than the end of December 2015, Regal will work with them.

The movie theater’s current staff will have the option to move to one of Regal’s other Richmond-area theaters. Nunley said the company does not provide the number of employees working at a specific theater.

The Westhampton Theater was built in 1938. It has 750 seats between its two auditoriums.

Regal operates six other theaters in the area, including the Commonwealth Center on the Southside, United Artist West Tower Cinemas on West Broad Street and Short Pump 14.

Long & Foster plans to remain in its Grove office for the foreseeable future under its new landlord, Long & Foster spokesperson Mark Randall said.

It’s saddens me to see this movie theater close. They do a wonderful job of showing alternative films in an intimate setting. It is such a gem that will be greatly missed.

There are never more than a couple dozen people in there when I go. Perhaps it is because the seats are so darn uncomfortable. Perhaps if they upgraded the seats, the theatre could pull its own weight.

I have a great idea! Keep it The Westhampton Theater and continue to show foreign and independent films.

Seats aren’t the issue. Its how long they show movies. They seem to keep movies FOREVER there. For example Imitation Game has been there for 3 weeks if not more. I think by now everybody in Richmond that wanted to see it would have. With only 2 screens they should increase the churn of the movies they showed.

This is very sad indeed. The Westhampton offers a very different experience with excellent choices, and is wonderfully convenient for those who reside in the near West End. I shall rent or purchase movies rather than drive five or ten miles to a Regal mega theatre.

Sad news. Will miss this theater greatly. The setting is so unique and possesses a ton of character. These types of vestiges of the past are irreplaceable and add so much to the character of the city and neighborhood. I hope the future plans are super sensitive and respectful of that fact.

What a huge loss! A neighborhood gem and a Richmond gem. The larger metropolis theater complexes are such a turn off to me. And so many nice spots to eat around it as well. Very sad to hear this.

@Brain Ezzelle. When you are booking first-run films, you often don’t have a choice of how long the run is for….you must commit to a minimum run of three weeks or more.

This is very sad. Every movie that we have attended there in the last 2 years has been to an almost packed house. The author of the article should also have included among the Regal Cinemas, one of their very newest and largest at Westchester Commons.

I am very saddened by the loss of this cinema. I spent some great times there.
Recall going to an all night horror film night in November 75.
Although I do not reside in Richmond, I generally tried to make it to a film when I am visiting.
Another landmark gone. Another blow to the arts community.

i am very sad to hear that we will lose this dear theatre. So many memories have been made there. It’s a movie experience unlike any other in Richmond.

This is very disappointing! I was just there on Saturday and always enjoy the choice of movies and being able to walk to several dining options before or after. The movie theater addition to a “mixed use” walkable neighborhood is highly desirable in my opinion….couldn’t it be updated/renovated?

@Pat Not sure what you mean by “updated/renovated” A great deal has been done….I believe they have a fairly new HVAC system…and digital projection. The problem is a business one, not a technology one. It is virtually impossible for a single or twin screen theatre to survive in the first-run movie market today….even if they are operated by a chain. Independently owned ones are already doomed unless they are in an isolated market away from multiplexes.

So sad to hear this. I love this theater and it’s location. I love their movie selection. It’s near residential, great restaurants and interesting shops – a wonderful walk-to location. I try to always catch a movie there when I come to Richmond. It is definitely part of the ambiance of the neighborhood even if it’s not packed every night. It will be greatly missed!

No,No,No, and NO – !!! are y’all CRAZY – this is the BEST damn theater in ALL of Richmond !! – BEST movies – BEST seats – BEST location – BEST assocaites and BEST overall experiance when it comes to take’n friends and family to see a GREAT film and have’n dinner later OR before – DO this and loose a sincere highlight in Richmond and cut the heart right outta the neighborhood its in. Sad day in mudville – truly – HATE this news and that it might be real…

Sad to hear this. Would always go every year to see the latest Woody Allen movie. Then in between for other indie films. Hope that someone in the area will show these.

The other thing is that this and the office will be torn down for
new development. The character of Libbe and Grove is going to slip away over time with the new developments coming in.

So, uhhmmm….why not redevelop the block by expanding the theater. If two screens aren’t economical, add more screens!

Also, it seems like the new owners must be oblivious to the role this theater plays in creating the atmosphere of this area. I imagine that the surrounding buildings/property are worth more or will be worth more in the long term if the theater remains and remains open. It attracts people to the area who would otherwise just go to Carytown, Movieland, or the mall. Regardless of whether closing the theater is socially or culturally responsible, it seems like they might be shooting themselves (and their neighbors!) in the foot…

This is probably far-fetched as I know little about the real estate and property expense involved, but there is a successful non-profit theater (albeit drive-in) near Lexington, VA.. Ref: http://www.hullsdrivein.com. It is the only non-profit drive-in theater in the United States. I’m sure the developers would gladly donate the property to the cause…….

It saddens me very much to learn that it will be closing. I love the history that this theater carries. In its own way, it’s like a living historical relic. You cannot put a dollar value on the ambiance, architectural beauty or the experience of watching quality films at this venue. This theater bridges a past era to the current arts. That is something modern theaters can only try to replicate but never accomplish. There are just some things that economics can never account for.