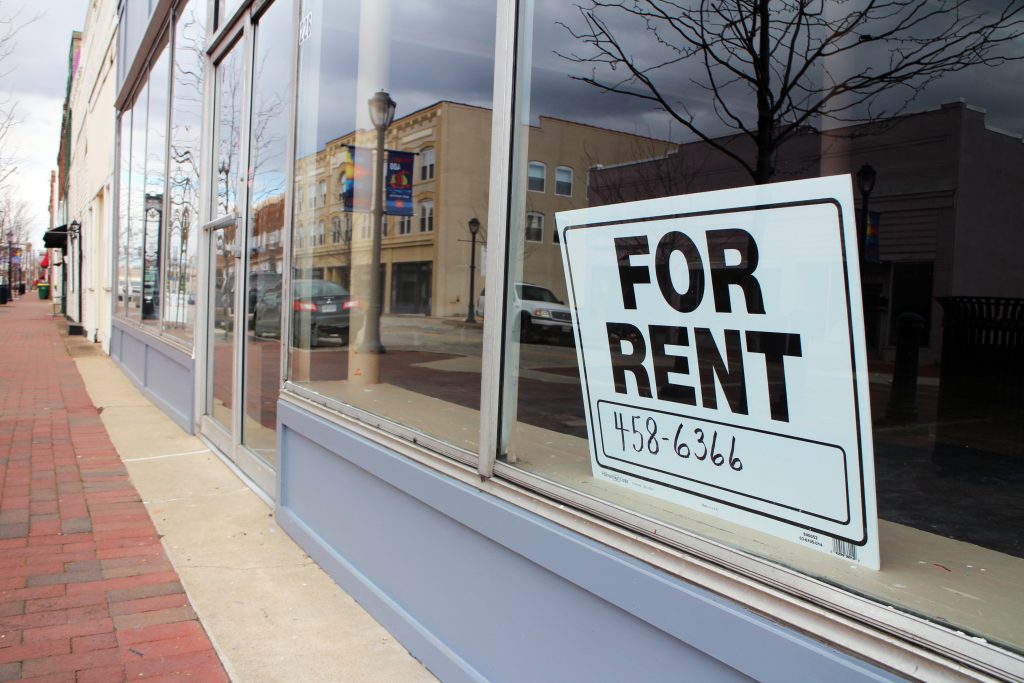 A Hopewell nonprofit wants to fill some of the downtown’s vacant storefronts. Photos by Evelyn Rupert.

A Hopewell nonprofit is betting that a business plan contest can help bring more life back to the city’s downtown.

The Hopewell Downtown Partnership has begun accepting applications for its Community Business Launch, an eight-week business plan competition designed to attract entrepreneurs to empty storefronts to a stretch of East Broadway Avenue in the city’s historic district.

Evan Kaufman, director of the organization, said the hope is that a burst of new businesses will result in a more vibrant and supportive place for entrepreneurs.

The goal is to eventually have 10 to 15 storefronts occupied by new businesses by the end of the year.

“They will be able to get in on the ground floor of this revitalization and be part of the grand reopening of Hopewell,” Kaufman said. “We think if we start clustering a group of businesses down here, we can create that space to make it a destination.”

Kaufman said downtown Hopewell was once a thriving retail center but began to decline in the ‘70s and ‘80s when shopping malls and suburban developments rose to prominence.

Today, a two-block stretch of storefronts along East Broadway Avenue between Hopewell Street and Route 10 is about 30 percent empty, Kaufman said. He said there are between 40 and 50 storefronts in the entire downtown Hopewell area.

“We have a good amount of vacancies,” Kaufman said. “The bones are still there. It just needs a little TLC to bring it back to life.” 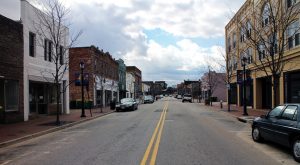 The main focus of the business competition program is along East Broadway Avenue.

Kaufman said about 40,000 square feet are being targeted by the business program. The properties are mostly privately owned, and he said the partnership is encouraging landlords to improve their properties in the area.

The organization is also talking with landlords about the possibility of flexible lease agreements for potential tenants.

“We’re in talks with landlords,” Kaufman said. “We have relationships with almost all the property owners.”

The organization has begun accepting applications for the contest. Businesses that are in the works or already up and running can apply, but they must be willing to relocate or open in downtown Hopewell.

The program is hoping to attract businesses from the apparel, restaurant, entertainment, fitness and jewelry industries, but is open to all types.

The Hopewell Downtown Partnership programs are funded by the city and state governments, as well as grants and outside donations.

For this new effort, Kaufman said the group is getting $100,000 from the state Department of Housing and Community Development to fund the competition as part of Virginia Community Business Launch.

Gloucester and Staunton were also selected to receive funding for similar efforts.

In Hopewell, the $100,000 will be used to help between three and six business get off the ground.

The application deadline for business hopefuls is Feb. 28, and the program will begin in March. Selected entrepreneurs will have an eight-week education program and get help putting together a business plan.

In May, participants will pitch their ideas to a panel of judges to compete for funding. The top business could get as much as $25,000, and additional prizes will range between $5,000 and $20,000.

Kaufman said SCORE Richmond, a representative from Virginia State University, Longwood Small Business Development Center and the Richmond Economic Development Corp. are helping out with the mentoring and judging of the participating businesses. 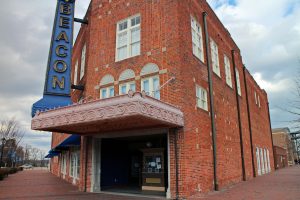 The Beacon Theatre, designed by the same architect behind the Byrd, was renovated and reopened about a year ago.

And the business plan competition is just the latest in series of development efforts that have taken place in Hopewell in recent years.

In 2013, Hopewell won a grant for more than $380,000 to convert a former furniture store at 238 E. Broadway Ave. into a cafe and art space. A cafe called Guncotton Coffee and Art Gallery is expected to open this year.

And the Beacon Theatre, a Hopewell landmark from the 1920s, was renovated and reopened last year. Kaufman said Hopewell put in about $4.2 million to complete renovations on the theatre.

Along the river, the Hopewell marina was renovated last year, and Kaufman said another goal is to once again use the marina for festivals and events, make it more accessible to sea planes, create a trolley stop there and connect it to downtown with a river walk.

Hopewell Downtown Partnership has also helped local property owners upgrade the facades of downtown buildings, several of which are up for lease and could be filled by a winner of the business program.

“People were very apathetic and thought nothing would ever happen here,” Kaufman said. “With the momentum we’ve been able to achieve, people have converted their apathy to hope and possibility.”

This is great to see. What a fantastic way to support entrepreneurs in #RVA. #LessTalkMoreDo in action. There is a lot going on in the tri cities to build *re-build* the small business community, this is one wonderful example. Good luck!

I would like to see some really nice dress shops in downtown Hopewell as well as some nice restaurants. Also a nice gift shop.

We have to go outside of Hopewell to get anything in quality clothing and eat at a decent restaurant. Also there is nowhere to buy a gift for weddings, anniversaries or birthdays.

I also think we have enough antique/junk shops lining the streets of downtown Hopewell. We need new and refreshing stores that offer things we have to go to Richmond for. The downtown used to have 3 nice ladies dress shops and 2 or 3 nice men’s clothing stores. We also had a department store (Cooks which changed to Ruckers) and several shoe stores also 3 drugstores. I would like to see these things that will keep Hopewellians shopping here instead of having to go out of town. Thanks for want new ideas.

We need things that will excite people of all ages. Nice clothing stores as well as casual clothing. As for entertainment – video games, an arcade, maybe something like Paint & Play or Build A Bear. Cosmetics would be great, especially if it’s a small/locally owned business. I have seen that most of the shops in Hopewell are geared more towards adults. It would be awesome to have something for kids, teens, and young adults.