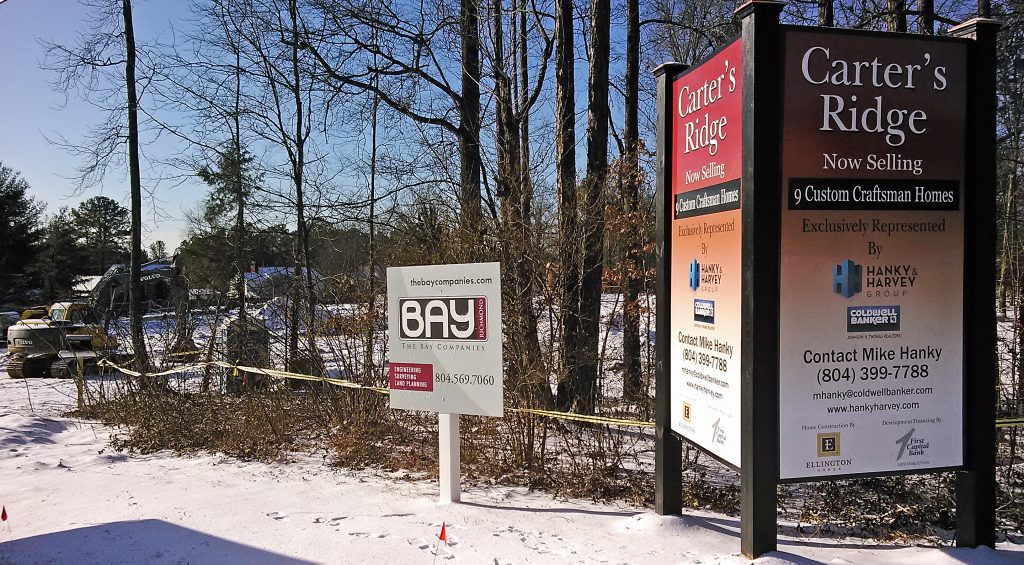 A local developer is getting ready to dig into a nine-home project in Tuckahoe. Photo by Jonathan Spiers.

Nine custom-built homes are being tucked in between two established neighborhoods in Henrico’s Tuckahoe district.

Site work began in January on Carter’s Ridge, a 10-lot cul-de-sac subdivision on the west side of Ridge Road, between the Belle Grove and Whitehall neighborhoods.

An existing house on the three-parcel property will remain at the end of the cul-de-sac, and the rest of the street will be lined with nine Craftsman-style homes built by Ellington Homes.

Mike Hanky, who is selling the lots through The Hanky & Harvey Group – Coldwell Banker Johnson & Thomas, said no two homes will be the same in appearance or design. Homes will range from 3,000 to 5,000 square feet and be priced starting in the mid-$600,000s.

“We’ve been marketing quietly since late fall,” Hanky said. “We just put signage up there probably a couple weeks ago, and as of today, we have committed six of the nine. So we’ve got a couple left.”

Hanky said most homes will have detached garages, and a few will have an attached garage. Every home will be required to have some type of front porch. Some houses could have basements. 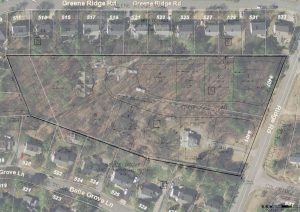 “It’ll be a variety of looks, but everything will be in the Craftsman style,” Hanky said. “I think it will be a very nice, aesthetically pleasing community and a little something different from what you typically see, architecture-wise, right through that corridor.”

The 5-acre Ridge Road site is near the Tuckahoe Shopping Center and Tuckahoe Elementary School, between Parham Road and Forest Avenue. The developer, 8401 Ridge LLC, purchased the three parcels for $1.03 million in 2014, according to county records. Rob Lanphear is listed as the registered agent.

First Capital Bank is financing the project. A deed of trust puts the financing at $1.6 million.

The Bay Cos. did the engineering work for the project, and Hugh Hawthorne signed off on the plans as site contractor.

Hanky said the property became available following the death of the owner of one of the three parcels. The owner’s family sold that land, which included a farmhouse fronting Ridge Road that has since been demolished. County records show 8401 Ridge LLC bought that 1.5-acre parcel from the Annie Carter estate for $255,000.

The home that remains on an adjoining parcel was later sold as well, along with a smaller parcel beside it. County records show the developer bought those two parcels, which total about 3.3 acres, from David B. and A.G. Mortimer for $780,000.

Hanky said the first few homes should start going vertical in mid-April, but he said the winter weather may push back that schedule. He said the goal is for all nine homes to be built by the end of 2016.

“Certainly by May 1, I would think we would be starting to build the first of the new homes,” he said.