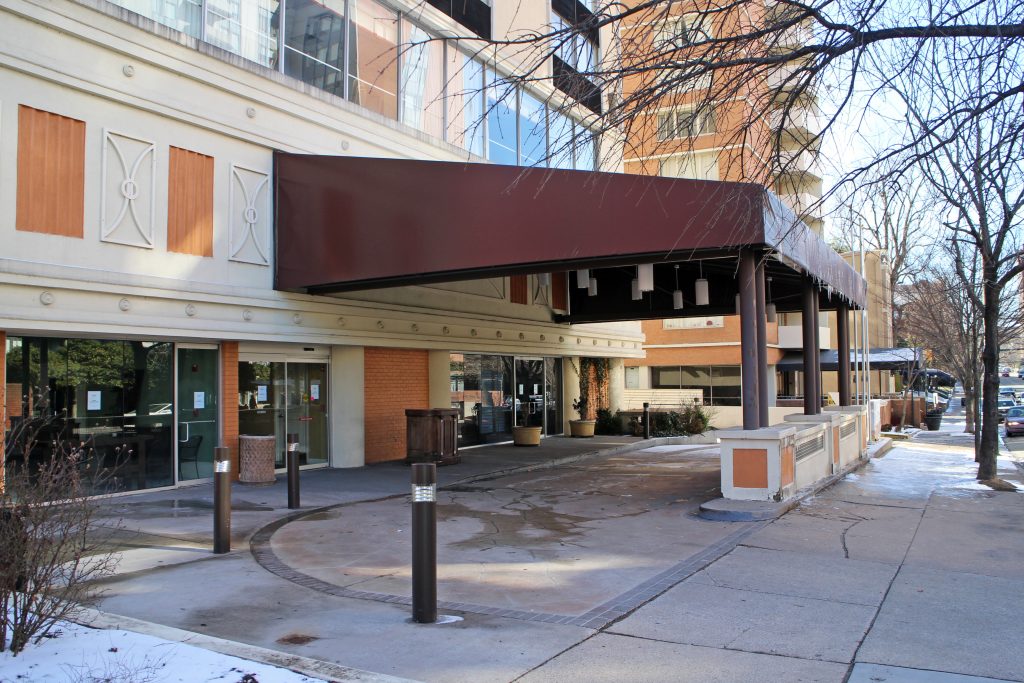 Signage has already been removed from the former DoubleTree on Franklin Street near the Jefferson Hotel. Photo by Evelyn Rupert.

A nearly $10 million sale has put a downtown hotel into new hands that will soon bring a new, college-centered concept to Richmond.

The 15-story hotel at 301 W. Franklin St., formerly a DoubleTree by Hilton, was purchased last week by Chicago-based AJ Capital Partners for $9.84 million, according to city records.

The 151,000-square-foot property closed on March 2 for a massive renovation project. The hotel will reopen early next year as the first Richmond location of the Graduate Hotel brand.“Graduate properties are unique in the sense that they capture the history and the culture of each town that they’re hosted in,” said Ben Gottlieb, vice president of acquisitions at AJ Capital Partners. 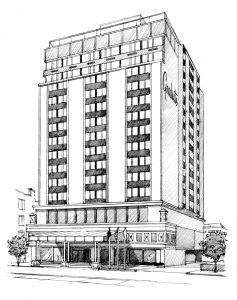 Gottlieb said the Franklin Street property was an ideal choice for a Graduate Hotel because of its proximity to both VCU and the downtown area.

He declined to share how much the renovations are expected to cost but said the project will reduce the number of rooms at the hotel from its current 230 to 200. That will leave space for the addition of a fitness center and more common areas.

Gottlieb said the company may look to take advantage of the property’s views of downtown and the capitol with a rooftop restaurant or bar.

Graduate Hotels, Gottlieb said, are meant to be gathering places for the community, and the Richmond location will feature some kind of dining or bar space. He said it is too early to specify what entity will provide those services but said the company is exploring possible concepts. 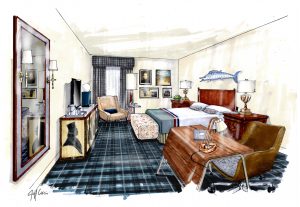 A rendering of a room in the Charlottesville Graduate Hotel.

The hotel had been owned by Richmond Hotel Partners, an affiliate of Dallas-based E2M Partners. The company put it on the market in late fall of 2014 and enlisted hotel investment firm Plasencia Group to represent it in the sale process.

Keith Coe, a broker with the Plasencia Group, said he reached out to AJ Capital Partners because he recognized that the Franklin Street property fit exactly what the company looks for in a Graduate Hotel.

“Graduate Hotels is a terrific candidate for that hotel, a terrific owner. It fits their strategy just perfectly,” Coe said. “They like boutique-sized hotels adjacent to or right on a university campus.”

Coe did not say why E2M Partners decided to sell the hotel. According to city records, neither E2M nor Richmond Hotel Partners owns any other properties in Richmond. The $9.8 million sale price matches the property’s most recent assessed value and is about $350,000 more than what E2M Partners paid for the hotel in 2006.

An interesting new concept for college towns perhaps. The article mentions one in Charlottesville but I’ve been unable to find it in a web search. What is its location?

Bruce, the Graduate Charlottesville is (or will be) located at 1309 W. Main Street. It’s currently being converted from a Red Roof Inn.

This was the first result in a google search: http://graduatecharlottesville.com/contact/

Too bad it’s not a Kimpton