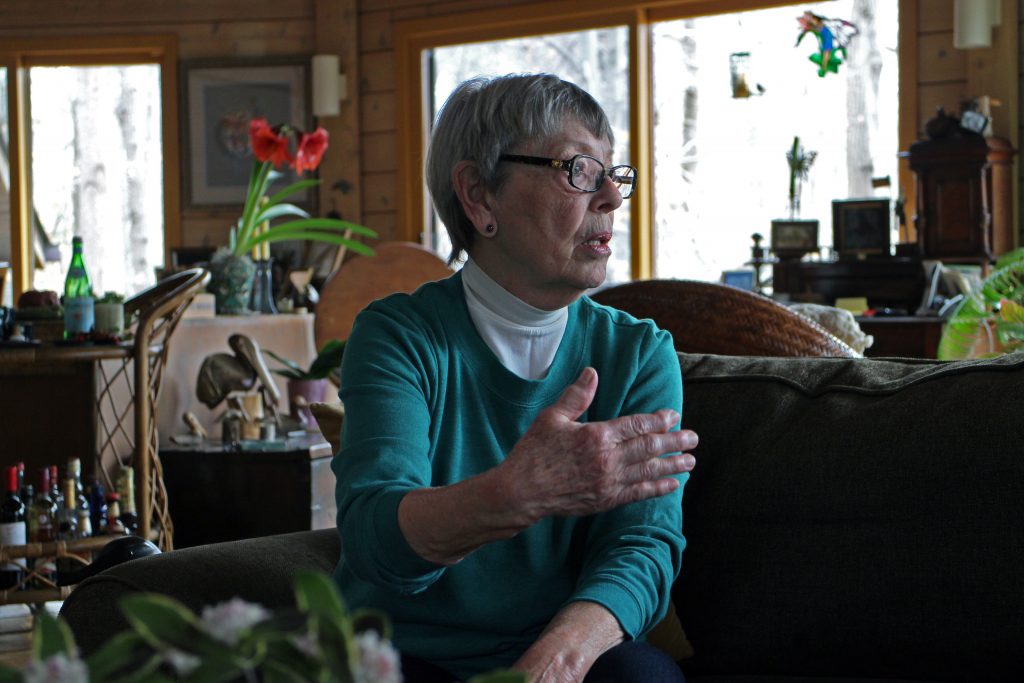 Nelda Snyder is putting her longtime home on the market. Photos by Jonathan Spiers.

A riverside retreat in Henrico’s Varina district is on the market for the first time in nearly a century.

Arrahatteck – named for an American Indian tribe that once inhabited the site – was listed in November by The Steele Group | Sotheby’s International Realty. The 158-acre property, of which 108 acres are in a conservation easement, is located at 9900 Arrahatteck Trail, off Kingsland Road near its convergence with Osborne Turnpike, just upriver from Dutch Gap.

The property, which features a contemporary circular-style house, a 3.4-acre spring-fed lake and two century-old log cabins, is listed for $1.4 million. The county most recently assessed the property for tax purposes at $358,700, but that comes with a caveat. The land itself is assessed at $830,300 and improvements on the property are valued at $204,000. The final taxable assessment is set after a break from the county’s land use program that’s pegged on the pure base land use value, plus improvements.

Owner Nelda Snyder has lived at Arrahatteck for much of her 79 years. She grew up in one of the cabins and has lived in the 12-sided house since she and her late husband, Harold “Buz” Snyder Jr., had it built in 1989. She said she is selling the property before moving into an assisted living facility. 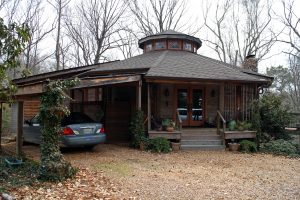 “This place has been so special to my family and to my husband’s family,” Snyder said. “Everybody comes here for everything; all the reunions are here, all the family gatherings. And it’s been used by so many organizations – Boy Scouts, Girl Scouts.”

Snyder said she intended to keep the property in her family but decided to sell when her two sons declined to take ownership. While the 50 acres outside the conservation easement could potentially be subdivided and developed, she said the property’s proximity to the easement makes it likely that her lifelong home will be preserved.

“We couldn’t stand seeing all of the land just disappear,” she said. “The thought of it being ripped up, with a house on this hill and that hill and the other – it was more important to save it than anything else.”

“Technically, I think they could be divided by right,” Rader said. “But realistically, because of both the existence of the power lines there and the market these days, I don’t think it’s feasible.”

Snyder said she envisions the property continuing the Arrahatteck (ehr-ah-HAT’-ik) tradition of hospitality and serving as a residential retreat. 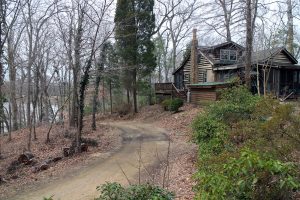 The property includes two cabins that the Snyder family has been renting out.

Adamson said the tribe, part of an alliance controlled by Wahunsenacawh, or Chief Powhatan, was drawn to the site for its natural springs. According to Snyder, the springs were once described in the writings of English explorer John Smith.

Citing history books such as “Jamestown Narratives: Eyewitness Accounts of the Virginia Colony,” the property’s listing says the Arrahattecks were hospitable to Capt. Christopher Newport’s discovery crew, of which Smith was a part.

The home, which Snyder describes as “Indian teepee modern,” consists of 3,100 square feet on two levels. The house is made of stone and wood with a steel beam in the center that Snyder said holds it all together. It has three bedrooms and 2½ bathrooms.

The two log cabins were built around the turn of the 20th century, Snyder said. They are currently rented on an annual basis. Both feature views of the James River, and the one that Snyder grew up in – her family bought the property in the ‘20s – is situated on a bluff overlooking both the river and the lake.

The property has 1,200 feet of river frontage on the James’ original channel, across from Hatcher Island and close to the Osborne Park boat landing.

While he does not expect the property to sell quickly, Rader said he anticipates interest to pick up in the coming months.

“We’re hoping for some more activity in the spring,” he said. “Properties of this type don’t sell overnight.”

Clarification: A previous version of this story correctly reported that the assessed value of the Arrahatteck property is $358,700, according to the county. However, that final taxable assessment includes a break related to the property’s enrollment in Henrico’s land use program. The assessed value of the land and its improvements before accounting for the land use program and including the acreage that is subject to a conservation easement is a combined $1.03 million.

I would like to make a clarification regarding the article on the Arrahatteck property. The property is listed for $1.4 million and the 2015 assessment is in fact $358,700. However, this assessment reflects the fact that the property is included in the Henrico County Land Use Program. Those properties included in land use have their assessments adjusted in order to provide a tax break for agricultural or forestry purposes and does not reflect the market value of the property. Matt Rader