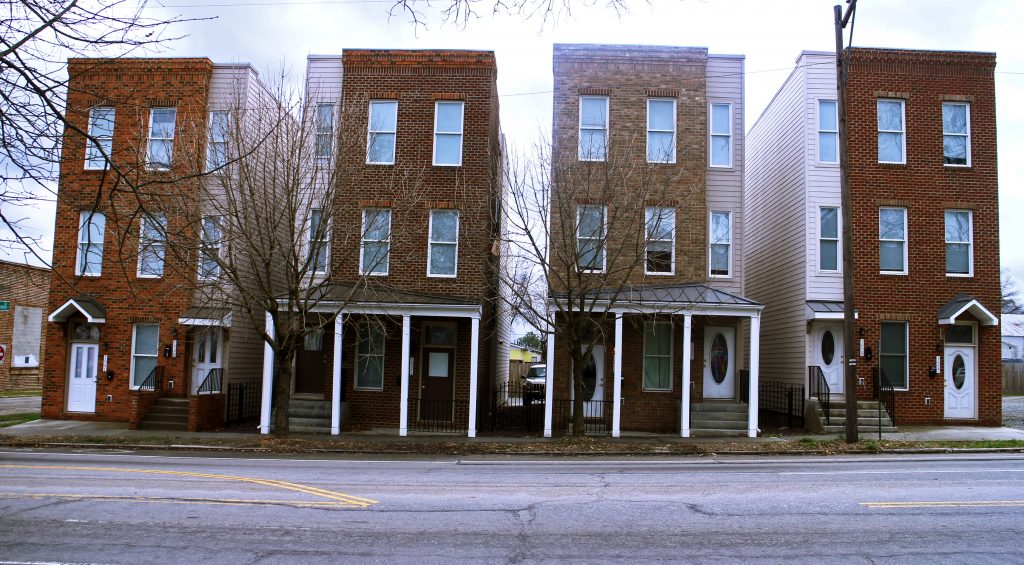 Eight of 46 condo units were built along Lombardy Street in 2010 before the project stalled out. Photos by Katie Demeria.

A previously stalled development on a chunk of Carver property should soon be restarted under new ownership.

According to Susan Haas, a broker with Joyner Commercial who worked the sale, the new owner will continue with plans to build 46 condominium units on the property, bringing back to life a project that had stalled several years ago.

“There are eight existing units that were built before the housing crisis, and builders stopped at that time, and so this buyer is going to build it out at some point,” Haas said.

She said it’s unclear when the buyer will start work on the project, but the new owner intends to continue with the original plans. Four condominium buildings, containing two units each, have already been constructed, and the site can hold 19 more.

Haas declined to identify the seller, but described it as a group of investors. According to city records, the existing condo buildings were built in 2010.

The condominiums are set to be around 1,200 square feet each and range between one- and three-bedroom units. Residents will have off-street parking.

According to city records, David P. Kohler is the manager of Sylvia Place Properties LLC. Kohler Management LLC owns rental homes in the 1500 block of West Leigh Street, about a block away from the North Lombardy Street property.

A representative with Kohler did not return requests for comment.

The property was not on the market, Haas said, but because she had known the previous owners since they started the work, she was aware of its potential as a “perfect investment.” So she reached out to the buyers.

“It was exciting at that time because it was one of the first EarthCraft projects, and of course now it’s kind of a mainstream thing to do, but at that point it wasn’t,” Haas said.

EarthCraft is a certification for homebuilders that designates energy efficiency, sometimes saving residents up to 30 percent on their energy bills, according to EarthCraft’s website.

Right now most of the property is a parking lot with one outbuilding that will someday be removed when the new builders complete the whole project, according to Haas.

The land sits directly next to Sugar Shack’s Lombardy Street location and across from the Maggie L. Walker Governor’s School for Government and International Studies. It also sits around the corner from a Kroger.

“It’s going to be a big community development and a catalyst for the area,” Haas said. “I think it’ll be pedestrian-friendly since it’s connected to the grocery store, so I’m excited for what will happen.”