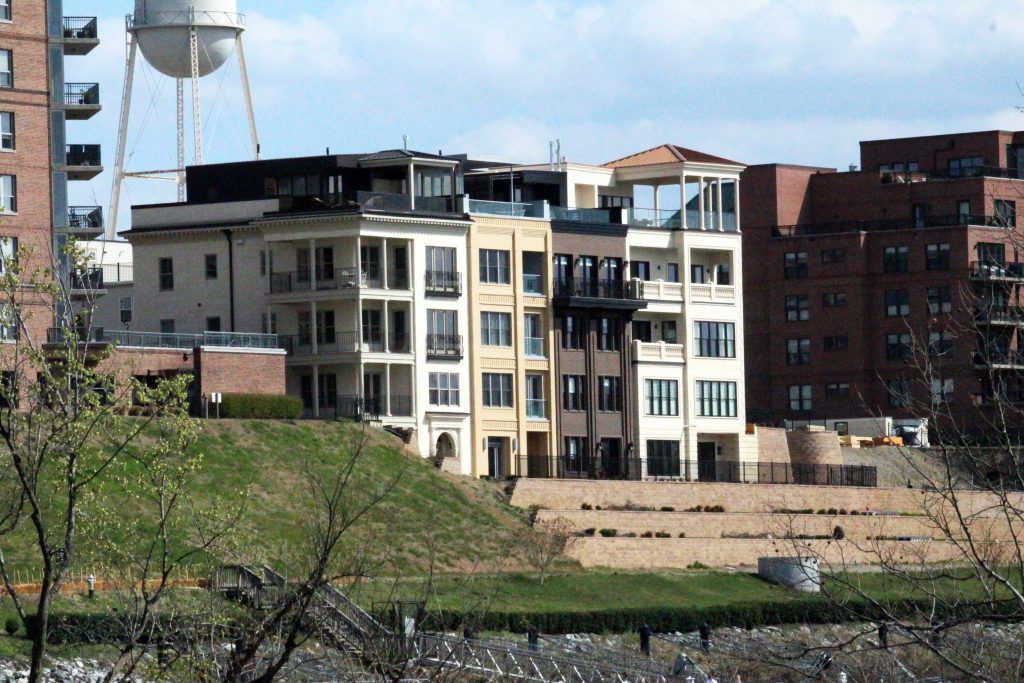 A Rocketts Landing townhome (far right) was the highest-priced home sale in the area last month. Photo by Jonathan Spiers.

A riverfront townhome and a River Road mansion capped the top-five list of March’s area home sales in the Richmond area.

The biggest and priciest of four townhomes, which make up the first phase of the Riverbank Terraces at Rocketts Landing, came out on top, with a sale price of $1.875 million. The customized rowhouse-style townhome overlooking the James River was put under contract pre-construction and officially sold March 30.

Amy Broderick and Rod Shortell were the co-listing agents through Alexandria-based McWilliams | Ballard, which was the exclusive real estate agency for Rocketts Landing from 2010 until late last year. Broderick, now an associate with Cushman & Wakefield | Thalhimer, said the buyer is local.

Broderick said the home – Unit 1 at 7 Bankside Mews – is the largest and most customized of the four Riverbank Terraces townhomes. The four-level, four-bedroom home totals just more than 5,400 square feet, compared to the other units that are closer to 4,200 square feet.

Broderick said its riverfront location and custom features contributed to the price.

“It’s a very special home. The views are just incredible,” she said. “There’s a full rooftop deck, lots of outdoor space, and they didn’t spare anything, as far as finishes go, on the interior.”

The home is the final unit to be sold for the first phase of Riverbank Terraces. A second phase of five townhomes is to be built nearby, with construction projected to start this summer.

Lisa Hyatt of Joyner Fine Properties is selling those units, which she said are being marketed with prices starting at $1.1 million. The units will be comparable to the first-phase homes, with each consisting of at least 4,000 square feet and featuring a two-car garage, private elevator and rooftop terrace.

Richard Souter of The WVS Cos., the overall developer of Rocketts Landing, said the mixed-use development just east of downtown has been a “mixed bag” in terms of new residential construction. He said several clusters of townhomes and condominiums were built on the site before attention was turned to the riverfront units. 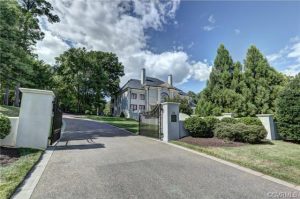 “The riverfront townhomes are just a very special product that needed something unique, and I think we achieved that,” he said.

Coming in second in top home sales for March was a mansion recognizable to motorists along River Road in western Henrico County. The home at 8333 River Road, in the Windsor on the James community, sold March 6 for $1.45 million – below its listed price of $1.699 million.

The two-level Mediterranean-style home was listed last August through a deed in lieu of foreclosure. Pam Diemer of Long & Foster was the listing agent.

Diemer said the home’s size – at just over 8,000 square feet, with an additional 6,500 square feet unfinished space – proved a challenging sell. She tried to attract out-of-town and international interest with broader marketing, including a YouTube tour of the property.

Diemer said another challenge in selling the home was that it was a vacant property, requiring staged furniture. She said its unfinished basement also called for a unique commitment from the eventual buyer.

“It was a huge house for Henrico County standards,” she said. “It was a unique property because of its size and prominent location on River Road, as well as the buyer having the opportunity to finish the entire lower basement level. That was a significant opportunity for someone to see the vision in that.”

Featuring stucco siding and a Buckingham slate roof, the 11-room home takes up two lots totaling just less than 2 acres. Built in 2004, the home includes four bedrooms and 4½ bathrooms and features a three-bay garage, 9-foot ceilings, a formal dining room and an elevator, among other amenities.

Rounding out the top five for March were: