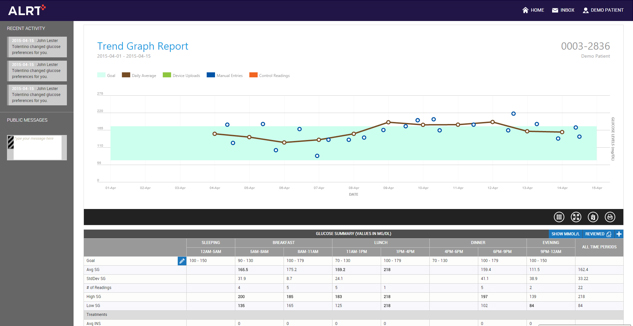 The Health-e-Connect system monitors and charts glucose data for patients and their doctors. Images courtesy of ALRT.

A local technology company has landed its first paid client since making a strategic shift toward disease monitoring systems two years ago.

The deal will give ALRT and its Internet-based Health-e-Connect system access to the Kansas City, Missouri, primary care clinic’s 3,400 diabetes patients.

The contract is the first revenue generator for the company, which turned its focus from previous technologies to chronic disease monitoring in recent years. The company has been developing Health-e-Connect over the past two years at its Richmond headquarters along Chippenham Parkway.

Over that time, ALRT has reported no revenues from sales, while expenses have totaled in the millions – $6.43 million in fiscal year 2014 and $2.99 million the previous year. An annual report noted the company’s efforts have been focused on achieving “wide-scale deployment” of the Health-e-Connect system. The program has been cleared by the U.S. Food and Drug Administration.

ALRT spokesman Phil Murphy said this first contract opens the gates for other potential clients, and the company is hoping to land large medical groups with significant diabetes patient populations. 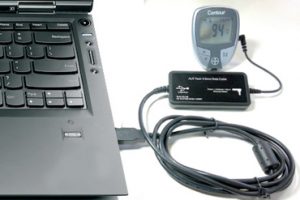 Patients upload info from their normal glucose readers into the Health-e-Connect site for analysis.

“Now that we’ve signed one contract, I think we’re going to get a lot of others who will follow,” Murphy said. “Nobody wants to take the first jump. They all want to see someone else sign the contract first.”

The Clay Platte contract is based on a per-patient per-month fee that Murphy would not disclose. Prices start at less than $25 per month for remote monitoring services and go up for additional data review, alerts to physicians, coaching for patients, insulin dose adjustment consultations and other services.

The site’s features can also include electronic timekeeping and records keeping for potential Medicare reimbursements, which Murphy said are currently $41.50 per month per patient.

In addition to advising treatment alternatives, data compiled from the system can be used to evaluate outcomes, potentially reducing long-term costs of care.

Jamie Stevens, practice administrator for Clay Platte, said a clinical trial led the facility to sign on to Health-e-Connect.

“We were looking for ways to better manage our high-risk populations, and diabetes is a very expensive disease process, especially if it’s uncontrolled,” Stevens said. “The future value to the practice could be significant. It’s not unusual to see six-figure claims on diabetic patients.”

Murphy said ALRT targeted diabetes initially because data from glucose monitoring is less susceptible to factors that could manipulate results, such as meter testing frequency or patients’ honesty in reporting results.

The company is financed by founder Sidney Chan and members of his family, who Murphy said own a majority of the company’s stock. Chan, a Canadian businessman whose background is in finance, led the company in an IPO after assuming its management in 1997. The company was incorporated in Nevada the following year.

Its stock currently trades on the over-the-counter market at about a penny a share.

Murphy said Chan moved the company to Richmond after hiring a CEO who was based in the area. The company has evolved and developed various products over the years, including a pet-monitoring device, Murphy said, but most recently redefined itself as a telehealth firm.

While Health-e-Connect has taken two years to develop, the process of securing its first client came more quickly, with Clay Platte signing up for the service before its six-month clinical trial had ended. The company plans to continue to pitch the product through additional clinical trials, in which the system is provided to medical groups free of charge for six months.

Murphy said the company accelerated the development and launch of Health-e-Connect in anticipation of an expansion to the Medicare reimbursement, which he said took effect earlier this year.