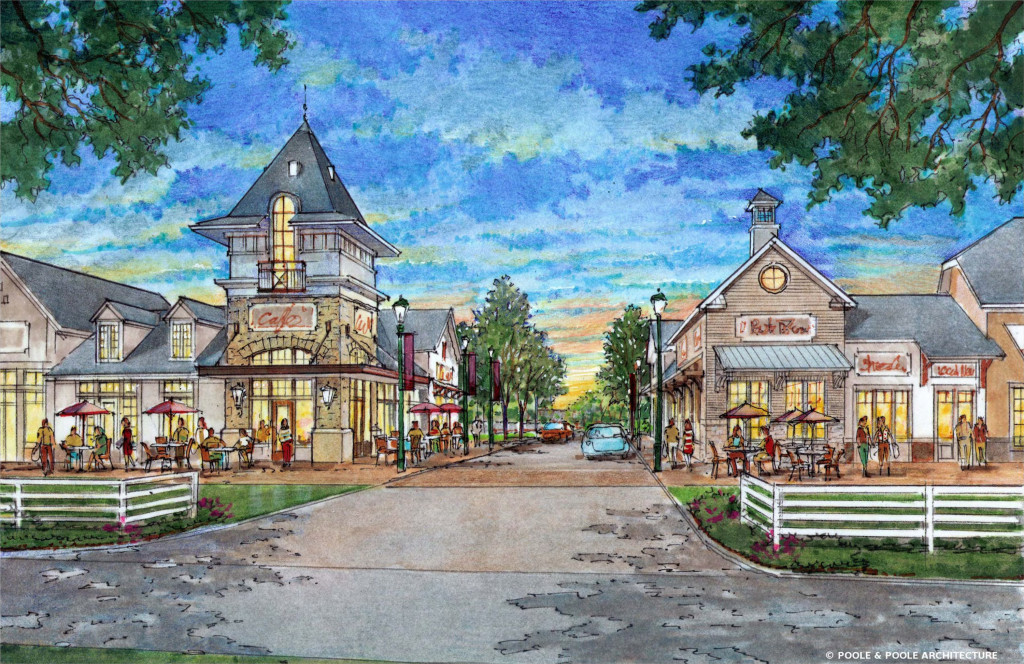 A developer is moving forward with a village-style development on the edge of Mechanicsville. Images courtesy of Edge Development Partners.

The first development proposed under Hanover County’s “multi-use” land designation got the green light from county supervisors this week.

The Board of Supervisors voted 5-2 Wednesday to approve rezoning of land for Caldwell Park, a 120-acre mixed-use development planned at Chamberlayne and New Ashcake roads.

The project, a mix of residential units and a commercial village, was proposed by Edge Development Partners through its Scotchtown Partners LLC.

Caldwell Park is approved for 115 single-family lots, 131 townhomes and 286 apartments, along with 200,000 square feet of commercial space.

Jesse Clark, one of EDP’s three managing partners, described Wednesday’s approval as an end to a lengthy process. The company received the county Planning Commission’s endorsement in June.

“It’s a long process from conception to this stage, but we’re proud of the result and look forward to the next step,” Clark said. 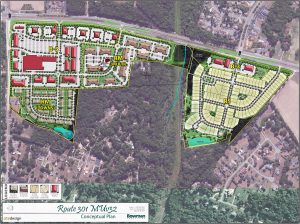 Once site plans are completed, Clark said construction would begin in mid- to late-2016. Depending on market conditions, he said he anticipates the development wrapping up by 2022.

The townhomes, to be located behind the shopping center, will include a central park area, and trails and sidewalks will connect the different sections. A creek separates the single-family section from the rest, but the trails are intended to connect the areas and promote walkability.

“The goal with this project was to raise the bar and create something unique in Hanover,” said Craig Kilpatrick, a managing partner at EDP with Clark and Nolan Felts. “A lot of time and planning went into the architectural style, the view corridors, the wide, paved trail network and the lifestyle as a whole.”

Clark has said EDP has been in talks with “several upscale neighborhood grocers” and other tenants for the shopping center, but he said he couldn’t share any names.

He said several builders have expressed interest in the project, but the developers haven’t settled on a firm.

“I assume we’ll be talking to them in the coming months,” he said. “There has been significant interest in each piece of the project.”

Caldwell Park is one of the first two developments to be proposed under the county’s “multi-use” designation, which was added in 2012 to accommodate high-density commercial projects with a mix of other uses, including residential. The other, Big Oak at Bell Creek, is being proposed by another developer.

Good job Craig and Nolan it has all of the uses to be one of the best address in Hanover and a trend setter.

FINALLY! A good development in Hanover county. Looks like a nice one and is certainly needed in the county.

this is all a crock….county residents are opposed to this development, yet the supervisors approved??? makes you wonder why. People move to Hanover to escape the clutter and traffic issues associated with such developments (i.e. Short Pump and Chesterfield). As a tax payer, I would expect a decrease in taxes paid as a result of this impact if it is supposed to supply a boost in tax sales revenue generated, which we know will not happen. I wonder who’s pockets were greased to make this happen??

Sorry Richard, but not all county residents are against this. A total of 13 people spoke against this. Yes, 13. This is a quality development. It is what makes places like Hanover special. Growth is going to come, you can’t stop it. Better it be a quality project then another strip mall. If you travel around any you see good developments and bad. The bad breed more bad, and the good breed more good. They do this right and the trend will be set. I think we have a chance to make 301 the “good” side of town.

I totally agree with you Rick. This area is going to be developed and at least the company who is developing it wants to give it class, witch will set a trend for this area of Hanover for residents and future developments and hopefully keep it the “good” side of town like you stated. I think it’s better to let them develop this land now while a developer is willing to give it quality, then a couple years down the road when another developer would come and put your average development on it.

Nice to see a development with class coming to Hanover. I like to see a wegmans as the grocer. Wegmans builds 80,000 sqft stores, which is the size this grocery store is suppose to be-81,000 sqft to be exact from looking at the site plan. Just my opinion. I’m looking forward to it!