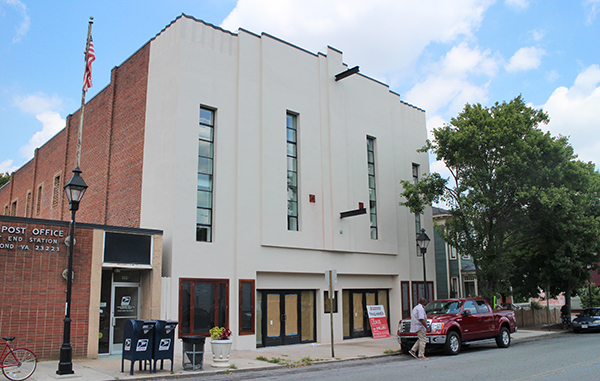 A former theater has been converted into more than 20 apartments and restaurant space. Photo by Michael Thompson.

To help overcome some vacillation and get the word out, a group of restaurateurs are looking to the masses to come up with a name for their new Church Hill establishment.

The owners of The Mill on MacArthur launched a naming contest this week for the restaurant they plan to open in January in the New East End Theater apartment building at 418 N. 25th St.

Rather than choose a name themselves, owners Amy Foxworthy, Josh Carlton and Chip Zimmerman plan to accept suggestions through a website designed by Foxworthy’s husband, Robert Huddleston.

“It’s hard to get three people to agree,” Foxworthy said of her and her partners.

The challenge of consensus building aside, the contest was also a way to spread the word about the forthcoming venture.

“We were trying to think of a way to announce our presence to the community and get them involved,” Foxworthy said. “We know how important the neighborhood is to the success to anything we do.”

The contest has so far received more than 200 suggestions, which have varied from the thoughtful, funny and informative. Foxworthy said she can’t tell where the submissions are coming from. All that is required to submit a suggestion is an email address. She said she has been happily surprised with the response.

“There’s always that fear it’s going to backlash and be seen as a joke,” she said. “The worst thing would have been if no one cared.”

The owners plan to accept submissions until October. They’ll then narrow the list down to three names, which they’ll announce publicly.

Foxworthy said some kind of public vote may be used in the process, but there is some reluctance to hand over full control of the naming decision.

“We were a little leery of that,” Foxworthy said. “It’s still a possibility.”

Ultimately, the final decision will be made by the owners, and the originator of the winning name will be awarded a gift card, an eponymous menu item and an invitation for a party of four to attend the restaurant’s opening.

In conceiving the contest, Foxworthy said she and her partners went it alone and didn’t consider reaching out to a marketing firm or freelancer to help name the restaurant.

“We think of ourselves as a mom-and-pop kind of thing,” Foxworthy said. “We would never have thought to shop out the idea to someone else in a professional manner.”