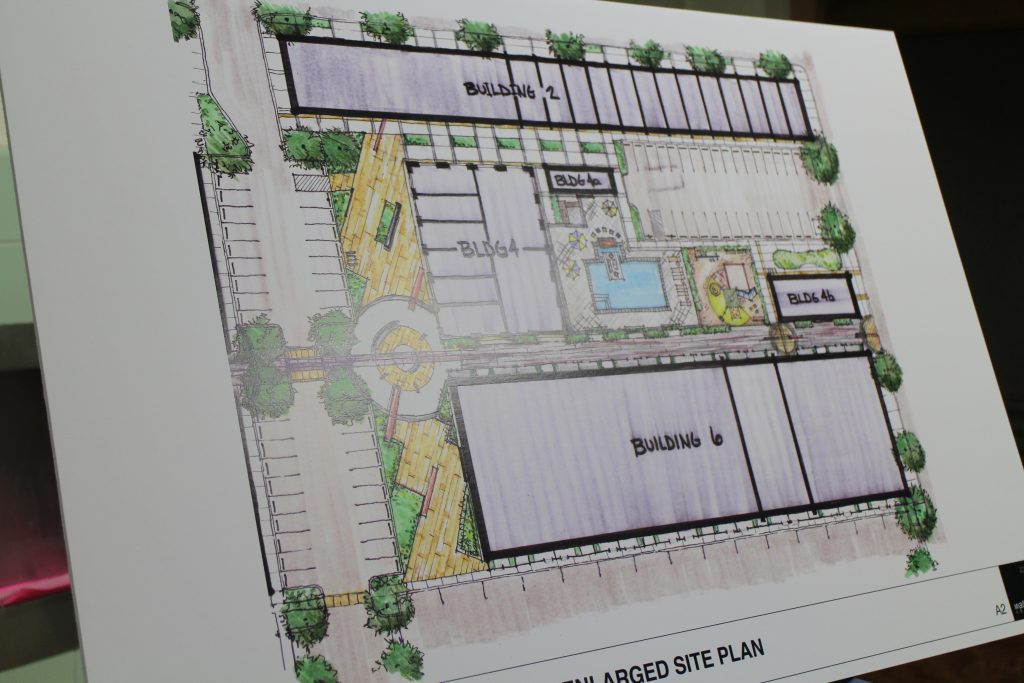 Plans were made more clear for the GRTC property at a Thursday meeting. Photos by Michael Thompson.

Plans for the transformation of the former bus depot along West Cary Street will aim to extend Carytown across the Boulevard, developers said Thursday.

Chris Johnson and Tom Dickey of The Monument Cos. presented what they envision for the 7-acre site at 101 S. Davis Ave. to a room of about 40 people at John B. Cary Elementary School.

Initial plans call for 280 apartments, 15,000 square feet of commercial space and 320 parking spaces. Two sites of new construction on Cary Street and at the corner of Grayland Avenue and South Robinson Street are included in the plans. Seven historic buildings will be renovated using historic tax credits.

“These will be very high-end, nice apartments,” Johnson said. 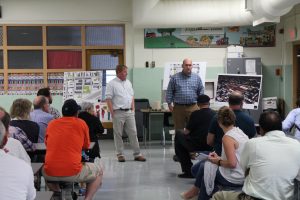 Johnson and Dickey, along with Howard Kellman of the Edison Co., comprise the LLC that has the property under contract to purchase from the Greater Richmond Transit Co.

The apartments will be rentals that cater to young professionals and empty nesters. The rent for each unit is expected to be about $1,300 per month. No commercial tenants have been selected for what the developers described as an extension of Carytown.

Much of the feedback from the presentation’s viewers concerned questions about parking. The developers said it has been a consideration in their plans.

“It should be pretty self-sufficient as far as parking goes,” Dickey said.

Renovations on the historic buildings will begin in December. New construction will begin once a plan of development is approved, which Johnson said could be May 2016.

The Monument guys are here for the long term. The Community can expect to see a beautiful development on Cary.

I hope the include a plaza for the businesses, especially any restaurant space. I think that is one thing that is missing from the current Carytown. If you look at other commercial streets around much of the world they usually have a series of plazas as focal points where people can gather, get off the sidewalk and get something to eat or drink. I really wish Willow Lawn had done something like that in the center versus a series of bigger sidewalks.

Slightly underwhelmed by the proposal given what the potential could be. Too many surface spots instead of a garage so that outdoor space could be better utilized. With that said I’m still really stoked that this development is happening and glad to see the space go to use.