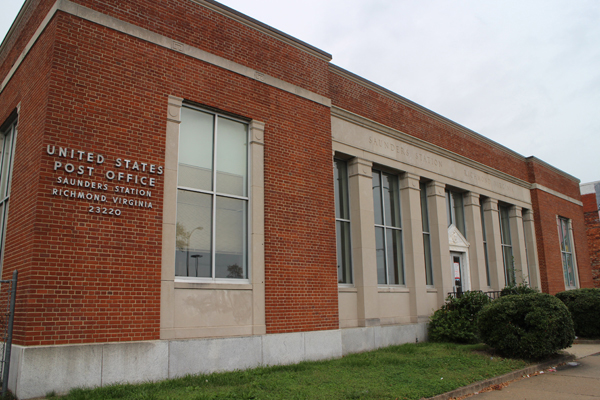 Mobelux will take about a year to renovate Saunders Station with the help of historic tax credits. (Photo by Michael Thompson)

A Manchester tech company is putting its stamp on the Fan.

The deal was finalized on Monday, said Mobelux co-founder and President Jeff Rock. The acquisition was made through Torq Holdings LLC, which is controlled by Mobelux.

The company plans to renovate the 12,000-square-foot building and relocate from its current 4,000-square-foot home in the Corrugated Box Building at 201 W. Seventh St., where it has been since 2009.

“We really wanted to find a place that was part of Richmond. We did not want to go out to the counties,” Rock said. “Manchester is going through a transitional process. Mostly (the move is) because most of our team lives in the Fan and a lot of them went to VCU.”

Rock would not comment on what the company paid for the Post Office building, and city records had not yet been updated to reflect the purchase. The seller was the United States Postal Service, which sent out a request for bids on the property in July, Rock said.

The building was most recently assessed at $1.45 million, according to a city record. Rock said Mobelux almost bought the property a year ago before it was temporarily taken off the market.

“We went up against a bunch of different bidders to buy it,” Rock said.

Mobelux has 25 full-time employees and its clients have included Tumblr, iHome, and McKesson. It is in the process of launching a spin-off of sorts called New Custom that makes customized handmade goods.

Rock said it would take about a year to renovate the building, which was built in 1937 and has been vacant for a few weeks since the Post Office moved a few doors down.

Bob Steele of Beyond Ordinary Boundaries is the architect for Mobelux’s design of the space; a general contractor has not yet been chosen. Mobelux financed the purchase with help from Union Bank. Rob Dirom of CBRE | Richmond represented the Postal Service in the sale.

Quirky features of the property include a walkway fitted with observation holes that overlooks a work area, an old boiler and a place for shoveling coal. The building was named after a Richmond postmaster, Rock said.

Rock said Mobelux wanted a space it could grow into and that had room for hosting events like its annual RVA Hackathon. He said at the time it was built, the Saunders Station building marked a westward expansion for the city and Mobelux hopes to re-energize the space.

“We’re excited to own a piece of history,” Rock said.

What was the walkway for, you ask? They were built into older post offices to allow postal inspectors unfettered access in monitoring employees while conducting an investigation. They were the only ones with access to those areas–not even the branch postmaster was supposed to be in that area.

Congrats on the new space! What a wonderful location and beautiful building.