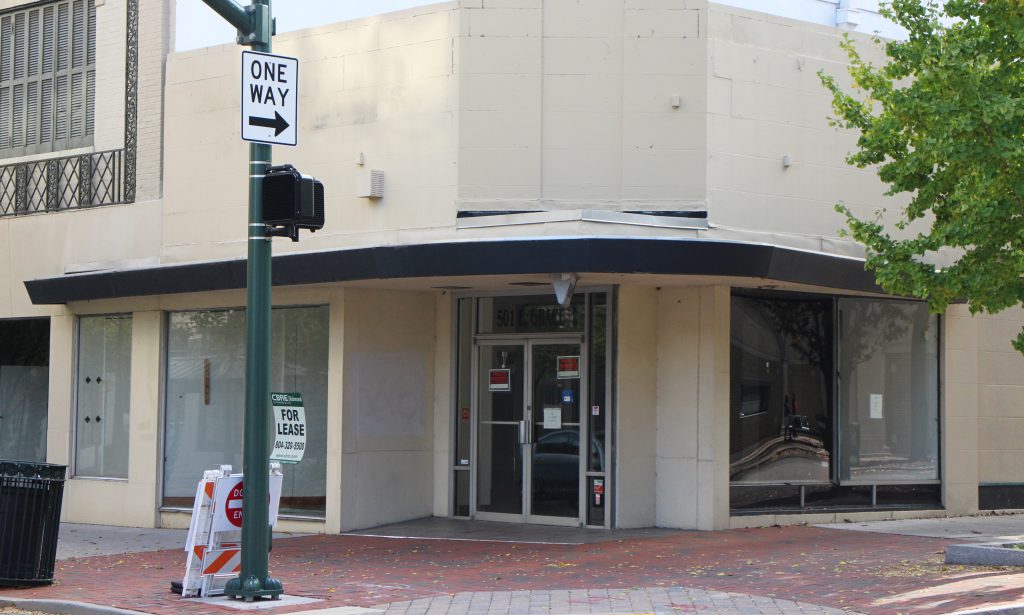 A new restaurant is moving in at East Grace and Fifth streets. Photos by Michael Thompson.

A secret society is coming to East Grace Street and is looking to cater to the downtown lunch crowd.

Secret Sandwich Society, a sandwich shop founded in West Virginia, plans to open a Richmond location this spring at 501 E. Grace St. It will be brand’s second store.

David and Tashia Bailey opened the first Secret Sandwich Society in Fayetteville, West Virginia, in 2010, and eventually sold it.

The husband-and-wife team recently moved to Ginter Park and saw Richmond as a good market for raising their family and also to grow their business.

“It’s definitely a great dining scene and we’ve been eating our way through it,” said David Bailey, 39. “The bulk of our business needs to be the downtown lunch scene – that will pay our bills.”

Much as the restaurant’s name suggests, it will sell sandwiches along with burgers, salads, and various sides. Secret Sandwich will be open for lunch and dinner and have a bar.

The Baileys have leased a long-vacant 3,200-squre-foot space on the south side of East Grace. They are renovating the space, with Formwork Architecture doing the design and Conquest Moncure & Dunn as the general contractor. CBRE broker Barry Hofheimer and Scott Boyers represented the landlord in the lease.

Bailey said it will cost between $450,000 and $600,000 to open Richmond’s Secret Sandwich Society. The venture is being financed with a combination of private investment money, help from BB&T, and landlord incentives. Bailey said he would eventually like to add a rooftop bar and dining area to the building.

In addition to dabbling in sandwiches, the Baileys know their way around a pizza. David Bailey co-founded and owns a minority share in a beer and pizza chain called Pies and Pints, which has nine locations across West Virginia, Ohio and Kentucky.

Bailey said there are no immediate plans to expand the Secret Sandwich Society brand.

“We do have some advisers who would like to see this grow,” he said. “We get emails all the time about locations.”

Congrats and best of luck! I am looking forward to being a regular and a rooftop bar down the road will be great!

Hello, Michael. Enjoy your columns. Since you have an “ear-to-the-ground”, have you heard of any parking decks in the works. New businesses are opening, which is great, but without adequate parking, customers will be reluctant to visit. Most of the parking in that area seems to be only monthly parking.

Congratulations Richmond! You will love Secret Sandwich Society as much as we do in Fayetteville!