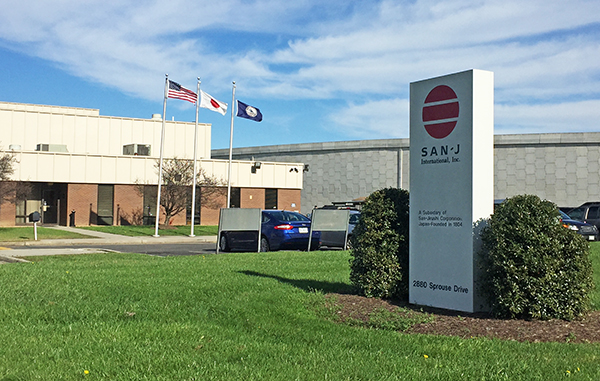 San-J International is planning a large expansion of its existing production center. Photo by Katie Demeria.

A Japanese company’s bid to more than double the size of its eastern Henrico plant took a step forward last month.

San-J International, which makes tamari soy sauce and other Asian cooking sauces, received approval from the Henrico County Planning Department on Nov. 18 for a 60,000-square-foot expansion to its facility at 2880 Sprouse Drive, near the airport.

The construction, which should start in the first quarter of 2016, is part of a $38 million investment the company announced in conjunction with Gov. Terry McAuliffe’s office earlier this year. The deal followed McAuliffe’s visit to Tokyo in the fall of 2014, and the company said it was fueled by a demand for San-J’s products, particularly gluten-free items.

Draper Aden is the engineer, and Livermore Associates designed the project. San-J will not have to go before the county’s Board of Supervisors.

San-J also secured a $300,000 performance-based grant from the Virginia Investment Partnership program, which is aimed to help existing companies.

San-J’s Henrico location was constructed in 1987 as the first tamari soy sauce brewing facility in the U.S., according to the company’s website. The company now produces 24 different products in its Henrico County plant.

The current facility supports 55 employees, and another 18 new jobs were announced as part of the expansion.

San-J International’s Japanese location was originally founded in 1804. It is based in Mie, Japan.