The Force is strong with a local production studio.

Just in time for the release of the latest “Star Wars” installment, local studio Mad Box has released a video that brings the film’s X-wing fighters, ATAT walkers and Millennium Falcon to life over images of some of Richmond’s riverside landmarks.

Using supplied drone footage, the minute-long mini-movie portrays spaceship battle scenes above the downtown riverfront, the Atlantic Coastline Railway bridge and the Powhite Parkway bridge, with sound effects and music made famous by the movie. For film buffs, there’s even a “Wilhelm scream” thrown in – the stock sound effect the series helped to popularize.

Created as a tribute to the sci-fi series, the video has gained traction through social media shares and has caught the attention of movie fans and locals alike. Mentions on RVAmag and WTVR.com helped to spread the word.

The attention has surprised the crew at Mad Box, which intended it as a pet project, Executive Producer Macy West said. 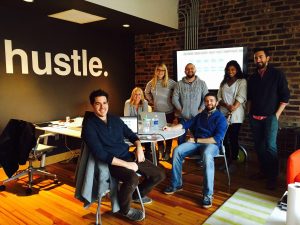 “We put it out there just to say we were excited about the movie, and there’s been a lot more attention than what we anticipated,” she said.

“We’re hoping it’s not too much that Disney (which owns the rights to Star Wars) gives us a call later,” she joked.

Matt West, Macy’s husband and co-owner of Mad Box along with Chris Williams, led the video’s development as creative director. He said the idea came about from some in-house noodling with aerial footage supplied to the studio.

“We had some friends who shot some drone footage, and they dropped it off for us to just play around with,” he said. “One of our motion graphics guys, Rick Plautz, was animating a 3-D paper airplane into one of the shots. We started joking around about how cool it would be if there was an X-wing in there. We ended up making an edit and coming up with the whole battle scene.”

He said stock computer models available online were inserted into the footage, which was shot by Gordon Whiteway and Trey Trumble. The finishing touch was the music and sound, which was designed and mixed by Andrew Uvorov of local recording studio Red Amp Audio.

After about a month of working on it between the studio’s paying gigs, Mad Box posted the video on its website on Wednesday. The Wests said the reception has been more than they expected.

“We just kind of did it to show off what we can do and play around. It’s kind of a fluke that everybody’s watching as much as they are,” Matt said.

As of Thursday afternoon, Macy said the clip had received 40,000 video views and more than 1,500 Facebook shares.  She said they’ve had good response from Reddit, as well.

“We’re kind of blown away at the moment. We totally thought that some people would be excited – our friends and family and maybe some businesses we work with,” she said. “We’re just excited because the goal was to bring more awareness and excitement about the movie, and that seems to have worked.”

Macy declined to put a dollar figure on the project but said it represents more than 200 hours of work over a span of four weeks. Most of that time was put in by Plautz, who Macy said is as much of a fan of “Star Wars” as she and her husband.

“These guys, when they were kids, ‘Star Wars’ is what they’ve all said drew them into this business,” Macy said. “So the opportunity to just be able to play with it, with how relevant it is right now – the timing is just perfect.”

Matt said the video is a more grown-up version of fun projects he did as a teenager.

“I made goofy videos of me swinging a lightsaber around when I was in high school and animated stuff on it,” Matt said. “This is just that, except now we have a team and a skill set to make it look a little better than high school.”

My first reaction was “Permission, Permission!” but then I checked it out. Quite grand, exciting, great city for a battle! I love the drone footage. Congrats all around!