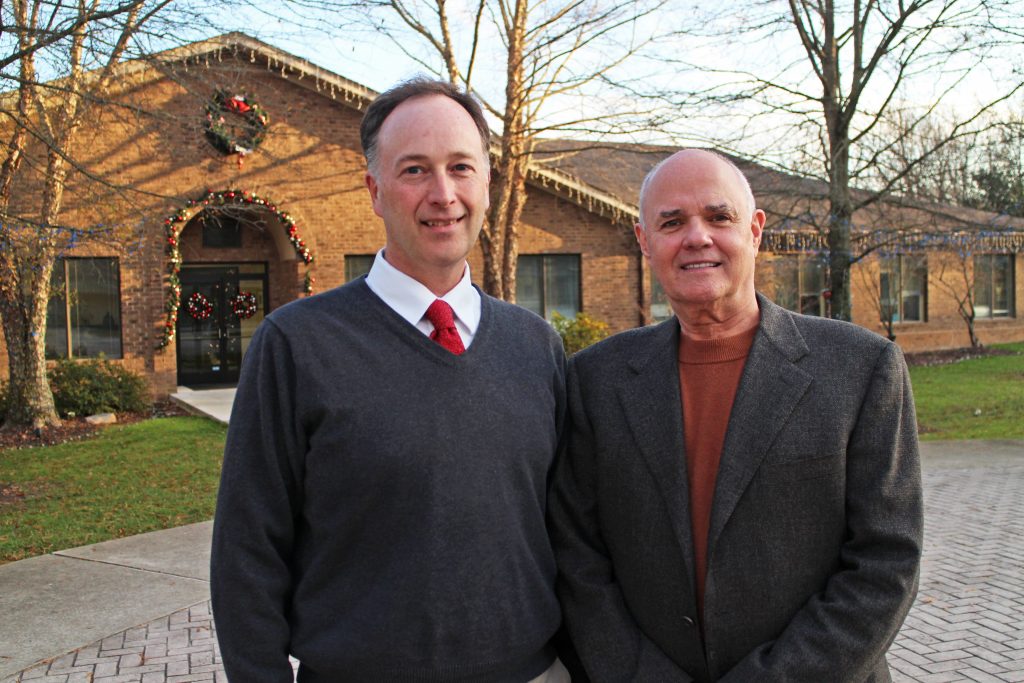 Trinity Episcopal Head of School Robert Short (left) and Baxter Perkinson, who with his wife has donated a total of $2 million to the school. Photos by Katie Demeria.

A recent donation will help a local private school raise the curtains on its latest project.

A previous renovation to the arts center was completed in 2013 but did not include updates to the theater, which is located in the same building.

“It’s the one spot on our campus that has not changed very much at all, and it needs it, it really needs it, to serve the kids,” Trinity Head of School Robert Short said.

The theater will get new seats and a new stage, and improvements will be made to the building’s exterior. Worley Associates is the architect on the project, and Kjellstrom & Lee is the general contractor. Work is expected to start this spring and should wrap up by the beginning of the next school year. 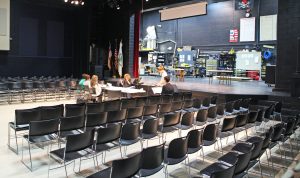 About $600,000 of the Perkinsons’ donation will be immediately available to the 43-year-old school for the renovations, while $400,000 will go toward long-term estate planning.

“We’re very grateful for Baxter and Elaine’s contributions,” Short said. “Philanthropy toward your fellow man is so important for these students to see.”

The full budget for the theater work is between $1.2 million and $1.5 million, and Short said the school will be reaching out to alumni and current parents to raise the rest of the funds. It is the final piece of the school’s $10 million Future Pathways Capital Campaign, which was started in 2003.

With this latest donation and the Perkinsons’ first gift in 2012, the couple is now the Southside school’s largest single benefactor, the school said in a release.

The couple became a neighbor to Trinity in 1974, when the building that currently houses the arts center was the campus’s only structure. Now the 39-acre campus houses multiple buildings, including a recently constructed 50,000-square-foot athletic center.

“As I grew up, Trinity grew up,” Baxter Perkinson said. “I take great pride in what they’ve accomplished.”

The Perkinsons said they were both were raised by uneducated parents but pursued education on their own, which Baxter Perkinson cited as a reason why they wanted to give to the school. He is a dentist who works full-time with his practice, Virginia Family Dentistry. Elaine Perkinson was a biochemist before the couple had their four children.

Baxter Perkinson said he developed a passion for painting, particularly watercolor, as an adult and hopes to encourage the students at Trinity to foster their own art interests. He has never sold a painting, instead donating them to philanthropic causes.

“I learned how to paint as an adult, with no inkling I would ever do such a thing,” he said. “Then, even more importantly, I found something important to do with the paintings, which intrigued me to keep doing it.”

The Perkinsons have one grandchild enrolled at Trinity and another expected to enroll next year.

Correction: A previous version of this story incorrectly stated that Trinity is in the West End. It is on the Southside.

Trinity Episcopal School is near Stony Point on the south side of the river. Not quite the “West End”.