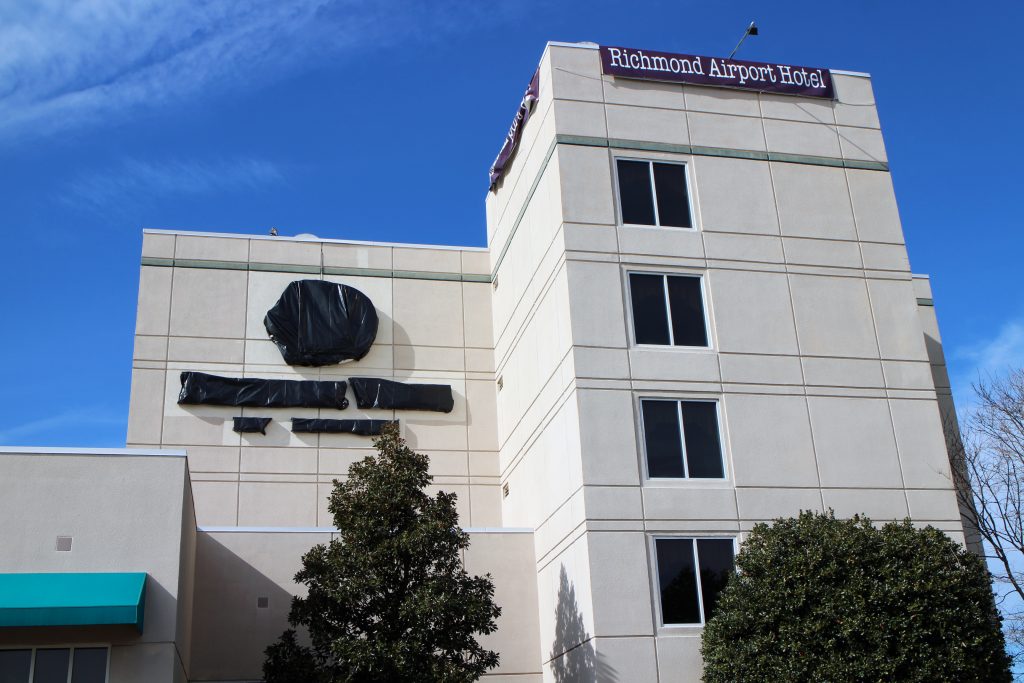 The former DoubleTree near the airport was stripped of its Hilton brand early last year. Photos by Katie Demeria.

Richmond’s largest hotel operator has increased its grip on the market around RIC.

The 160-room hotel was constructed as a Hilton property in 1989, according to Henrico County records. It lost its brand about a year ago after the former owner, New Jersey-based Pacific Concord Management, chose not to renovate the building and instead put it up for sale.

Shamin’s acquisition of the property, which closed Dec. 17, was in the works for about a year, CEO Neil Amin said.

“It’s right across from the (RIC) terminal and is really an irreplaceable location,” Amin said.

Shamin plans to do a full renovation of the property and is in the process of exploring different branding options. Amin declined to name what brands the new owners are considering specifically but said he expects a new brand should be finalized by the spring.

The hotel is currently operating as Richmond Airport Hotel and will remain open throughout the renovation process, Amin said. Shamin doesn’t have a renovation budget yet, as it will change depending on what brand the company chooses. The company is financing with Park Sterling Bank.

The Eubank Road property was particularly appealing to Shamin because it is the only full-service hotel in the airport area, Amin said.

“That’s why we want to make it upscale and really spend a lot of time on it,” he said.

Full-service hotels offer amenities like restaurants and extensive meeting spaces for guests. The Richmond Airport Hotel supports a Wings restaurant and lounge on its first floor.

Amin characterized other hotels in the airport area as select-service hotels.

“It’s very expensive to build a full-service hotel,” he said. “There are very few of them outside of downtown areas.”

“We’re a long-term holder, so we believe in the long-term future of that area and the Richmond airport,” Amin said.

Shamin owns a total of 38 hotels in Virginia, Maryland and North Carolina, 24 of which are in the Richmond market.