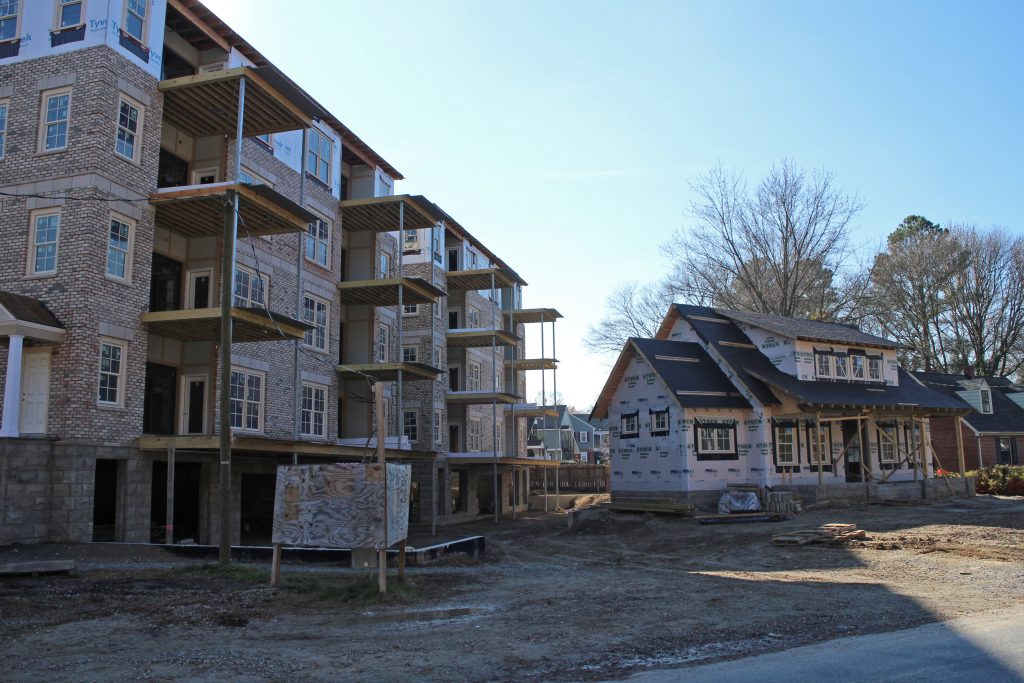 As they try to restart their stalled West End condo project, a group of developers is fighting back against their former general contractor in court.

Tiber Partners LLC, the developer of the 15-unit Tiber condo project at 510 Libbie Ave., has filed a counterclaim against its contractor John K. George & Co., which was fired from the unfinished job last year and sued the ownership group in November.

The development, which has marketed its condos for between $600,000 and $1 million, has been dormant for two months. Construction was supposed to wrap up a year ago but presently is less than 50 percent complete, court documents state, due to fallout between the general contractor and the partners.

“Tiber Partners is working diligently with the new contractor to provide information to the lender, Middleburg Bank, and with that information in hand we hope to begin construction again shortly,” Montgomery said.

That information, he said, is basically what a lender would typically receive regarding a development, including the cost to complete, how it will be done and a schedule.

Montgomery said Tiber Partners does not yet have a completion date in mind for Tiber, nor do they know when construction might restart.

“There are a lot of moving parts,” he said.

Originally hired for the Tiber job in June 2013, JKG filed a suit last November claiming that its $6.5 million contract to build the condos had been wrongfully terminated by Tiber Partners. JKG claims it was kicked off the job and blames Tiber Partners for failing to provide it with the necessary documents it needed to finish construction in a timely manner.

Tiber Partners denies the allegations, and in a Dec. 15 counterclaim alleges that the partners realized in the summer of 2014 that the project wouldn’t be completed on time and “sought to expedite construction,” by firing JKG.

“(JKG) failed and refused to undertake any efforts to complete the project in a timely manner, even though the contract clearly provides that ‘time is of the essence,’” the counterclaim states.

Five of the 12 buyers who had purchased units in the Tiber project initiated arbitration with the developers, seeking to recover $2 million in damages for delay costs, among other losses. The developers met with the buyers in September but “did not bring the matter to a close,” according to the counterclaim.

During those conversations, Tiber Partners claims in its countersuit, it learned that one or more of the buyers might walk away if JKG continued to be involved in the project.

“Tiber Partners also confirmed that (JKG) did not have the experience, expertise, attitude, resources, or financial management skills that are necessary to bring The Tiber to a successful and timely completion,” the countersuit states.

The counterclaim blames JKG for deficiencies in construction, including “improperly installed windows and doors, and warped studs due to lengthy exposure to the elements.” It claims the contractor did nothing to resolve the alleged problems when they were pointed out.

Tiber Partners alleges five counts against JKG, including breach of contract. It is seeking damages of at least $2.5 million.

On Jan. 7, JKG filed an objection to the counterclaim, stating that it “affirmatively avers that construction of the Tiber project could not have been completed prior to January, 2015 for many reasons.”

JKG’s attorney, Courtney Moates Paulk of Hirschler Fleischer, said: “We are very confident in our position, and nothing that they responded with has changed our position.”

A court hearing on the matter has been scheduled for March 18.