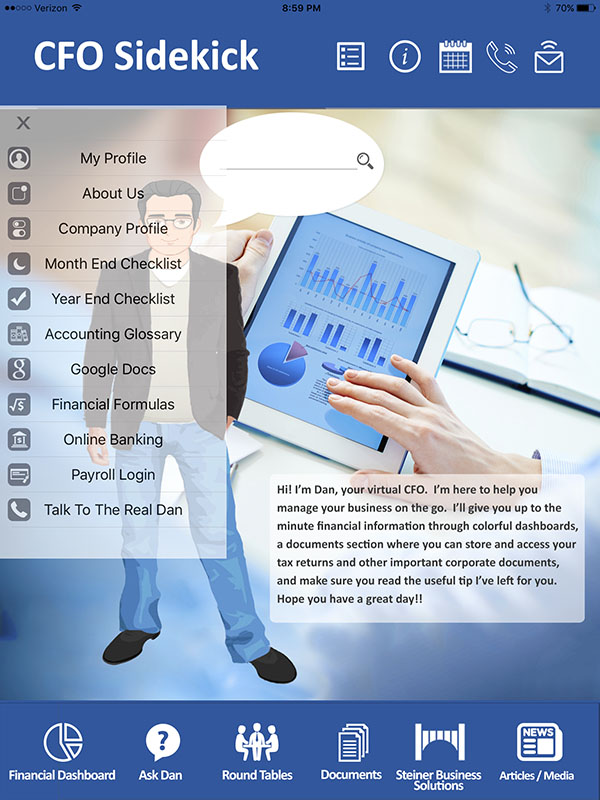 Steiner and Jones plan to launch the app this month.

At the time, Steiner, who runs West End accounting firm Steiner Business Solutions, was frustrated with the difficulty he had getting meetings with clients and potential clients, and was looking for a different way of getting in touch.

“What’s the best way to get in front of people if they won’t take phone calls or emails?” Steiner wondered. “They aren’t sitting behind a desk. They’re all on tablets and phones.”

That’s when he saw a Today Show segment about a fitness app – and it hit him: “I blurted out, ‘There should be a mobile CFO app.’”

“I pulled out a legal pad and made a first draft of the app that morning.”

From that, CFO Sidekick was born.

CFO Sidekick is a mobile app that can track and analyze a business’ revenue, profitability and liquidity. It will also be able to store documents and let users communicate with each other, as well as offer daily tips on business practices and a glossary of accounting terms.

Steiner created the product with the help of Nick Jones from local app development firm NS804Apps. During the six-month development process the two struck a deal that made Jones a minority partner in the venture.

“I wanted him to have some skin in the game,” Steiner said. “I wanted a big picture relationship.” 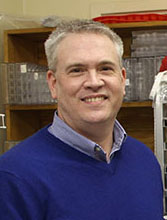 So far they’ve developed the app, tested it with a handful of people, and are in the process of applying to make it available it in Apple’s and QuickBook’s app stores. They plan to launch it this month for iPads and eventually hope to make it available for Android tablets, as well. It will be free to download when it launches to build up its user base.

Steiner and Jones would not say how much it cost to develop the app.

Steiner, who’s also an investor in local chocolate maker Chocolates by Kelly, said they aren’t just hoping small business owners will find the app useful: he hopes to license it to other accountants as a tool for drumming up business.

“The goal is (users) are going to start paying attention to their numbers and realize they need even more help,” he said.

CFO Sidekick will eventually make its money through ad revenue and premium services that will be available after the app has built up a user base.

Steiner and Jones also have another app up their sleeve. They’re preparing to pitch to investors next month to help development an app called Boardroom that is a spin off of CFO Sidekick’s communication feature.

Steiner said he sees an opening in the accounting field with the development of mobile apps.

“My profession is very slow to adopt change,” he said. “It’s very intimidated when it comes to adopting technology.”