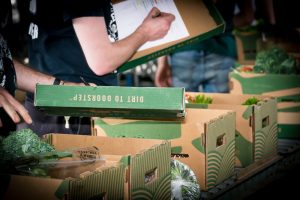 Fresh off a rebranding and an expansion to Charlottesville, a local online farmers market is getting a boost to its coffers.

Seasonal Roots, which until recently was known as Farm Table, is closing this week on a $600,000 capital raise that came together with help from Central Virginia Angels, an informal network of venture capitalists.

Seasonal Roots spokeswoman Kat Costello said the money will be invested into technology and advertising needs.

Duane Slyder founded the company in Richmond in 2010 as Farm Table with the idea of delivering regionally grown produce and other grocery items to members’ homes. Costello said the company has about 3,000 paying members and 350 people who buy from Seasonal Roots as guests.

Memberships cost $50 the first year and $35 every year after. A small box of Seasonal Roots groceries costs a member $19 and a guest $25.

It has been profitable since 2011, Costello said, and has been among the fastest-growing companies in the region each of the last two years.

In the first quarter, Seasonal Roots expanded its delivery service to Charlottesville, adding to its territories in Richmond, Hampton Roads, Fredericksburg and Northern Virginia.

“We’re going to focus on suburban areas that are highly dense,” Costello said.

Further expansion is on the table, including Nashville and Columbus, Ohio, as potential sites, she said.

Early 2016 was also the time when Seasonal Roots changed its name from Farm Table and tweaked its platform to allow its customers to customize their grocery orders as much as they liked. Under the previous Farm Table banner, customers had to pay to switch out items included in their boxes.

Congratulations to Duane and team for your continued growth. It is great to see local angels come together to fund high-potential local startups.