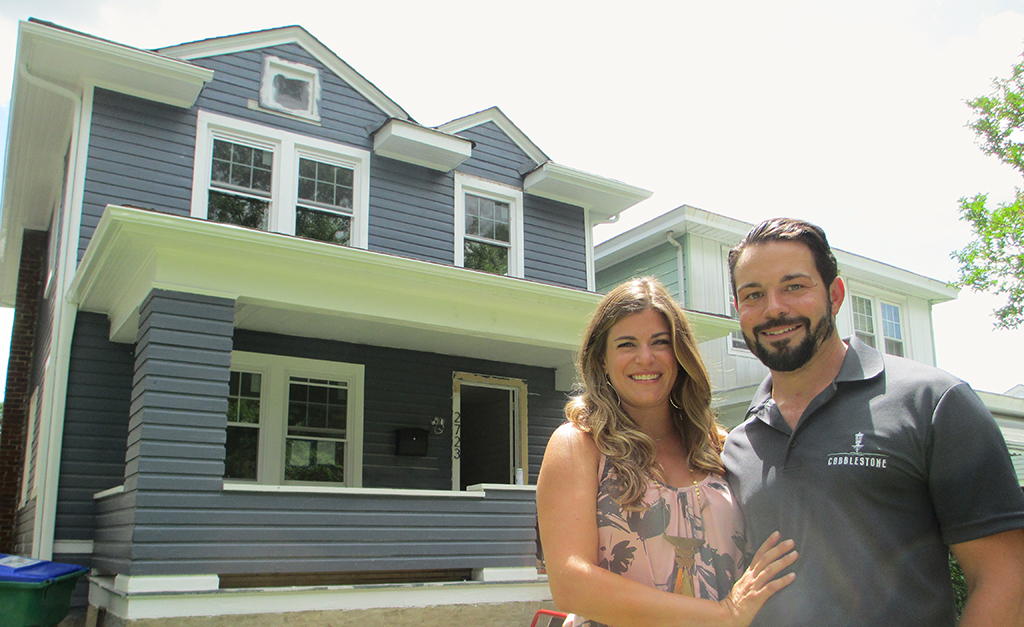 Breese and Josh Romano in front of 2723 Edgewood Ave., one of the 40-plus homes they’re on track to remodel by the end of this year. (Jonathan Spiers)

A local husband-and-wife renovation team is picking up the pace in their effort to breathe new life into some of Richmond’s older homes and neighborhoods.

Richmond natives Josh and Breese Romano are four years into their realty sales and home renovation business, Cobblestone Development Group. In that time, the number of homes they remodel and sell in a year has increased considerably, prompting the Romanos to team up with a local real estate agency to keep up with their sales volume.

The couple recently transferred their real estate licenses to One South Realty Group, which is now supporting the sales side of Cobblestone Development. The move reflects the momentum that Cobblestone has gained since 2012, when it renovated and sold three homes in its first six months.

Since then, their numbers have increased, from 13 homes in 2013 to nearly quadruple that this year. Josh Romano, who was previously licensed with Joyner Fine Properties – Breese was with Keller Williams’ Linchpin Real Estate Group and MSE Properties – said they’re on track to complete 48 houses by year’s end.

A Monacan High School grad, Josh, 34, started Cobblestone after four years as an acquisition manager with Trustworth Properties, where he learned facets of the house-flipping business from Mark Gans. He said he funded the venture initially by maxing out credit cards, working second jobs and sleeping on a mattress in one of his first houses to save money. 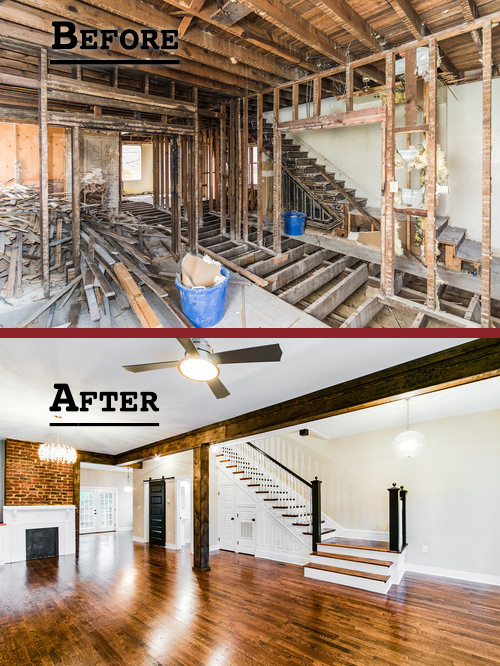 The ground floor of a home at 3219 Parkwood Ave., before and after renovations. (Photos courtesy of Cobblestone)

“I didn’t grow up in a really great house, so the opportunity to get into flipping was cool,” Josh said. “The first house I did, I was like: ‘I’m just going to do it because I can. Make money or not, I don’t really care.’ I mean, I should, but more importantly, the house is going to be amazing and I know it’s going to sell, because if it’s a great product, somebody’s going to buy it.”

After six months and three houses, he said he was able to pay off his debt. He’s been funding the business, project by project, ever since, borrowing money from hard money lenders, or loan financing secured by real estate.

Along the way, he met Breese, a Steward School grad, who focuses on the design side of their projects and the client side of the business. Self-taught, the 31-year-old attended Auburn University but never studied design formally, picking up ideas from magazine clippings. Neither she nor Josh have a college degree, but rather, as Breese said: “Just an intense love for design.”

“We tend to like the hardest (projects). They give the biggest gratification,” Breese said. “Just seeing this old, rundown, sad, unsafe, lots-of-times scary house and turning it into something beautiful that a family or a person is going to create their lives in is really cool.”

The Romanos and their staff of four, including Josh’s dad John Romano, have kept their focus on fixer-uppers in Richmond’s older neighborhoods, such as Church Hill and Northside. They describe their renovations as going beyond house-flipping to fully restore an aging or neglected home.

Past projects have included homes in Northside at 2901 Moss Side, 2818 Griffin and 3124 Edgewood avenues, as well as other homes in and around Church Hill and the Fan. The company’s in-house carpenters and subcontractors are currently working on homes at 308 Sleepy Hollow Road in Henrico and 2416 Hawthorne Ave. and 2723 Edgewood Ave. in Northern Barton Heights.

2712 Fendall Ave., before and after renovations.

The company is seeing significant returns on its investments, flipping houses for double – sometimes quadruple – their purchase price.

While the work is funded with private money, Josh said he is hoping to start financing through banks later this year.

One South founder Rick Jarvis, who connected with the Romanos through partner and associate broker Tom Rosman, said Cobblestone has quickly gained a reputation for quality remodels that are revitalizing and reenergizing neighborhoods in transition. He described the partnership with Cobblestone as an opportunity to grow both companies.

“Richmond’s got a tremendous stock of historic houses that have been neglected for a long time, and it takes folks like this to understand what the right product mix is and all these things that are helping bring life back into blighted neighborhoods,” Jarvis said. “These guys are doing it on a scale that none of the other renovators are able to get to.”

Congratulations on the positive publicity. It is well deserved. I’ve admired your work from afar for a long time. Kuddos to you both! Keep up the good work, the city needs you! #RVA

Josh is a great guy and a quick learner. Glad to see he’s getting recognition for all the hard work. Way to go , Josh!

I am from the Richmond area and saw the show today on HGTV and it was great, best of luck to them both,