The marketing campaign for Donate Life America includes a mural painted on the side of The Broadberry, where a launch party was held Wednesday evening. (Photos by Jonathan Spiers)

Coleman Sweeney’s a good guy. Really, he is.

Not the fictional Coleman Sweeney depicted in the new, edgy, obscenity-titled marketing campaign by The Martin Agency for Richmond-based Donate Life America: the urinating-while-driving, women’s-bathroom-polluting, trick-or-treat-stealing “World’s Biggest Asshole” referred to in the campaign’s title.

That’s the Coleman Sweeney that people will get to know through the online video released to the world this week. Ideally, those people will include millennials, men specifically: the target audience for the organ donation advocacy group’s campaign.

But the real Coleman Sweeney – the character’s namesake – is actually an associate broadcast producer at The Martin Agency. And he’s the opposite of his cigar-smoking on-screen counterpart, promised Wade Alger, a creative director at Martin and one of four co-writers on the campaign.

“He was kind enough to lend us his name,” Alger acknowledged at a launch party at The Broadberry this week. “Coleman, if you’re (reading this), I promise you’re a great guy, you’re amazing, and you’re nothing like the guy that we portrayed in this thing.

“It just was a great name, and he knew it was a great cause and it would make a difference. That’s why he allowed us to use his name,” he said. “The real Coleman Sweeney is not an asshole.”

A year and a half in the making, the two-minute video – filmed by California-based production studio Furlined and featuring Thomas Jane, of the HBO series “Hung,” music written by Coldplay and a voiceover by actor Will Arnett – was posted on YouTube on Thursday with the goal of creating buzz and ultimately going viral, said David Fleming, CEO of Donate Life America.

“We want the audience to be self-selected. We want people sharing this with people that they think will appreciate it and will understand the humor,” Fleming said. “Our goal is to not offend people that may not jive with this sort of edgy humor, but we hope that if it grows virally, it’s going to grow on its own merits.”

Fleming and Alger said the group wanted a campaign that targeted young men specifically because organ donations from that demographic have been down. The use of edgier, darker humor and visuals is meant to connect with those viewers who will find it online, while not offending other viewers who may not pick up on it.

While the campaign will include some out-of-home displays, such as billboards and bus wraps in a few select markets, it is centered primarily on the online-only video, with no television or radio spots involved. Wednesday’s launch party at The Broadberry was presented as a wake for the organ donor character.

“I think millennials like darker, edgier storytelling, and that’s what we were trying to do with this,” Alger said. “That’s why we embraced using the word ‘asshole’, to hopefully break through that barrier and get them to go, ‘Oh, I should wake up and pay attention to this.'”

Fleming cited statistics that more than 120,000 Americans are currently waiting for a lifesaving transplant and hundreds of thousands more stand to benefit from an organ, eye or tissue donation to restore sight or health. He said 22 people die every day waiting for a transplant – about one person every hour.

“We hope this is an opportunity to give people who see this permission to talk about a serious subject in a not-so-serious way – to break down that wall that blocks the conversations in talking about this,” he said. “We’re probably going to get a little heat from some folks out there, but it’s going to be worth it.”

The group reached out to The Martin Agency, which it had worked with on a project specific to social media, and the agency responded by offering the work pro bono, as did everyone else involved in the project. Fleming put the value of the production at about $1.5 million.

“The Martin Agency stepped up to the challenge, pushed us to do something that we never would have imagined doing, but for the purpose of reaching these young Americans” Fleming said. 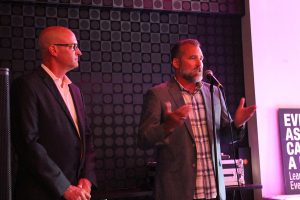 Among those who embraced it was Chris Mumford, Martin’s managing director of account management, whose late brother, Fleming said, lived longer after receiving a heart transplant. The son of Martin employee Julie Garner, was an organ, eye and tissue donor, and Fleming said at least two other Martin employees’ spouses are transplant recipients.

The campaign was launched nationally with help from Sigma Pi Fraternity and the National Kidney Foundation. And locally, it’s getting additional exposure with a mural painted by Richmond illustrator Duncan Robertson on the Boulevard-facing side of The Broadberry building.

Depicting a beer-bottle-tossing, mailbox-smashing Coleman Sweeney, the mural is tagged with the caption: “Even this guy can save a life,” along with the address of Donate Life America’s donor registration website: registerme.org.

While he described the campaign as edgier than anything the group thought it would ever do, Fleming said he expects the results will be worth it.

“If this saves one person who wouldn’t have gotten a transplant otherwise, it’s going to be worth it,” Fleming said. “We think this is going to help register thousands of donors that wouldn’t have contemplated registering, just because we weren’t able to reach them in a manner that they’re used to being communicated to. And we’re confident that it’s going to save lives.”

As for the real Coleman Sweeney, he’s gotten used to the idea of sharing his name with “The World’s Biggest…” – you know what. 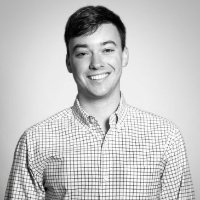 He said when Alger approached him with the idea a year ago, he was hesitant at first but got on board as the concept developed.

Already an organ donor, Sweeney said he initially thought he had already done his part, but later saw a personal privilege in lending his name.

“I thought if I can donate my name, then I’m sure others can donate life,” he said. “Hopefully my name will stick in people’s minds and remind them of the spot and, hopefully, save lives.”

Fleming, the nonprofit CEO, states that he wants, “people sharing this with people that they think will appreciate it and will understand the humor.” Should more causes highlight abusive behavior to attract attention? How low should we sink? Imagine the possibilities.

As a health care professional I can truly appreciate the need to get the word out anyway you can. Coleman Sweeney is funny, a bit naughty and it prove’s that even an “A” hole can give the gift of life. Truly a smart and funny spot, I watched it several times