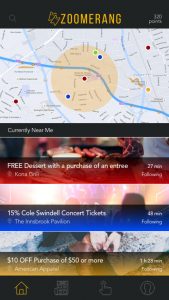 The Zoomerang app will connect customers with small business offers and loyalty programs.

Three months into his newest venture, Richmond Kickers midfielder Nate Shiffman was going through his post-practice routine of surfing various tech websites when he came across a damming article.

The headline on the TechCrunch story said it all: “Snapchat Memories is a searchable replacement for your camera roll.” With those few words, Shiffman and his co-founders’ fledgling digital content aggregator, LifeFeed, was all of a sudden just another iteration of a tech giant’s evolution.

“That was my biggest fear,” Shiffman says of the popular photo sharing app’s product update, the function of which is similar to what LifeFeed sought to be. “Snapchat can do this. Why are we even doing this?”

Like many startups, Shiffman’s was faced with a defining choice: continue to build the original product, or take the remaining momentum and try something new. Shiffman and co-founders Chirag Shah and Shaunak Turaga chose the latter option, and haven’t looked back.

The three pivoted to an app they call Zoomerang, a mobile marketing platform for small businesses to send notifications to followers and build loyalty programs. Once running, Zoomerang will allow businesses to digitally send coupons, promotions and announcements to users, who will earn points toward prizes after redeeming them with the app.

“Big venues and restaurants have proprietary apps,” says Turaga. “We’re offering a streamlined approach for the others.” 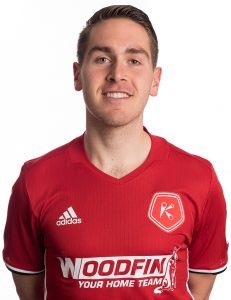 It wasn’t the first time Shiffman or his business partners have had to pivot.

The app that the co-founders were calling “LifeFeed” aimed to aggregate users’ photos and videos from social media platforms, mobile photo galleries, and even Snapchat. The photos would be mapped onto a profile and made searchable based on location.

It was the type of idea that Shiffman and Shah, both former soccer players at VCU, always brainstormed about while living in the college house they shared on Cary Street. Turaga, a North Carolina State engineering student who had previously developed mobile apps, was excited as well.

They were just a few steps behind. While the three started the business in March and hired a local app developer to create LifeFeed, developments in following months made the idea less viable, as companies like Apple and Google and then Snapchat zoomed ahead with similar ideas.

By the time Snapchat’s announcement came, Shiffman saw it as a blessing in disguise.

A standout player at Midlothian’s James River High School, Shiffman went to VCU and befriended Shah, a fellow soccer recruit with an itch for entrepreneurship. The two would brainstorm for hours while living together, keeping up the tradition even after Shah transferred to Campbell University.

“We always had that type of thought process, thinking up random, off-the-wall ideas,” says Shah.

While Shah left to play at Campbell, Shiffman became an integral player in the VCU midfield and was named the Rams’ captain in 2012. That experience led him to professional soccer in Oklahoma City, for which he put his pre-med degree on hold by leaving VCU a semester early, and, a year later, to the Kickers. 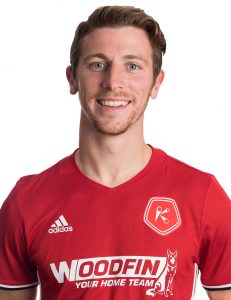 It was with the Kickers that Shiffman got his first shot at entrepreneurship.

On a road trip, Shiffman overheard Kickers all-time leading scorer Matthew Delicâte talk about purchasing a camera system. Delicâte, who also coaches in the Kickers organization, planned to use the cameras to analyze youth players. The two realized there was a bigger market for the videos among high school players looking to be recruited by college coaches.

What resulted was CinéSports, a joint venture that the teammates founded in 2015. They received financing from friends and family to purchase eight camera systems, with 25-foot tripods to improve shooting angles and ground-level monitors. They have also hired 40 independent contractors to edit and film videos, which have taken off at Mid-Atlantic soccer, lacrosse, field hockey and tennis tournaments, with The Beautiful Game being the company’s bread and butter.

“The soccer world is pretty small, so it’s nice to have contacts for that,” Delicate says.

Despite it generating a profit, CinéSports wasn’t on either players’ minds after a May practice. While doctors examined Delicâte after an injury in practice, they discovered a tumor, and the Kickers legend was diagnosed with kidney cancer.

“It was so surreal,” Shiffman says. “One minute we were practicing and the next we were expecting the worst.”

The Kickers would be down a forward, but CinéSports was also down a partner. In a twist of fate, the two had recently discussed with their business coach, Rene Haines of FocalPath Coaching, the transition of equity in the business should something happen to either Delicâte or Shiffman.

Delicate had successful surgery to remove the mass in June, and doctors discovered the tumor was benign. Delicâte was cancer-free.

“It was kind of lucky,” Delicâte says. “I didn’t have much on the agenda during that time other than playing on the team, and there aren’t that many tournaments to film in the summer.”

Timing, once again, proved to be crucial to a Nate Shiffman venture. 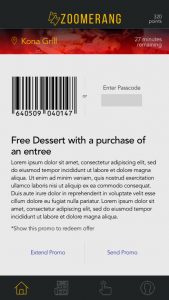 Zoomerang wants to capitalize on a dense Richmond restaurant market.

As with LifeFeed, Zoomerang is being designed by Richmond app developer NS804. Shiffman says the firm is looking for five to 10 Richmond restaurants to beta test the app in the fall, hoping a complete product will gain traction throughout the year.

Zoomerang is using Richmond as a test market because of the strong food culture. The app also will test in Raleigh, which is where Turaga is based. Like with CinéSports, Zoomerang’s co-founders secured financing from family and friends.

“We all are kind of in agreement that, at least right now, the scalability of what we’re doing can make the product grow organically,” Shah says. “If we were to raise (more) money, we’re strictly looking for a strategic investor.”

A tactician on the pitch, Shiffman says he couldn’t have planned for the various hurdles that challenged his businesses. But, as he has learned, sometimes it’s better to be lucky than good.

“I think we lucked out,” says Shiffman. “You have to have luck to be successful, so hopefully that’s a good start for us.”

Thanks for the piece Mike! We look forward to sharing the rest of our journey to launch with you and the viewers!