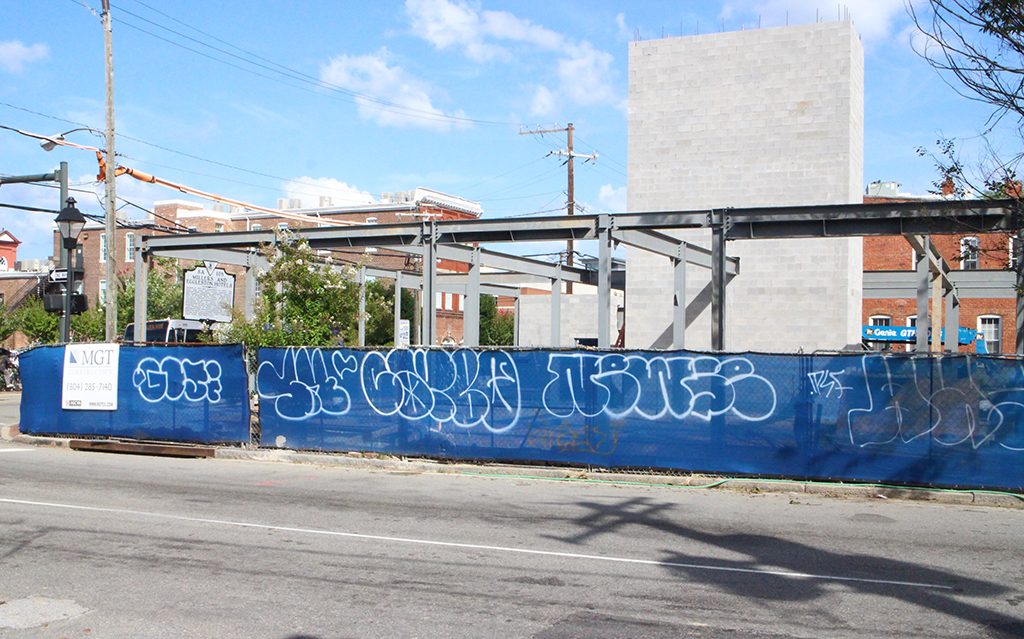 The Eggleston Plaza, under construction near the intersection of Leigh and Second streets. (J. Elias O’Neal)

And for the owners of a longtime Richmond-based restaurant, that means coming back to where it all started:  Jackson Ward.

The owners of Croaker’s Spot – a brand long associated with Southern soul food cooking – will be coming back to the historic downtown neighborhood by late 2017, confirmed Enjoli Moon, the restaurant’s head of marketing and branding.

The new restaurant, which will be run by Neverett Eggleston Jr., will be a ground floor tenant in the Eggleston Plaza – a mixed-use development currently under construction by Richmond-based Hanson Company at the former site of the historic Eggleston Hotel at Second and Leigh streets.

“Jackson Ward is home,” Moon said. “It has always been a goal to come back to the neighborhood and continue that legacy.”

While the size of the restaurant is still being determined, Moon said the new eatery will be designed to accommodate about 75 seats.

With plans for the restaurant well underway, Moon could not confirm whether the Jackson Ward site would carry the Croaker’s Spot full-service brand, saying the location could be rebranded and opened under another name that falls under the Croaker’s Spot umbrella.

“That’s something we are still trying to determine,” Moon said. “Whether it’s Croaker’s Spot, or another name, people will still have the same experience as they would if they were to come to a Croaker’s Spot.”

Croaker’s Spot first opened in Jackson Ward in 2001 at 119 E. Leigh St., where a new restaurant – Jackson Beer Garden & Smokehouse – is now planning to open in the coming months.

The eatery closed its Jackson Ward location in 2010 after the Virginia Department of Taxation said it owed the state nearly $44,000 in back taxes – money, Moon said, that has since been satisfied. Croaker’s Spot would later set up new digs at 1020 Hull St. in the city’s Manchester section in 2009. 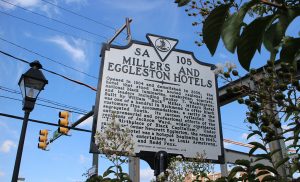 A mixed-use development on the historic site will include a restaurant owned by Croaker’s Spot. (J. Elias O’Neal)

Eggleston Plaza, which calls for 31 apartments to rise above the new restaurant, is the site of the former Miller’s Hotel and Eggleston Hotel, the latter run by Eggleston’s grandfather in the 1930s.

In Jackson Ward’s heyday, Eggleston Hotel played hospitality host to the wanderers and entertainers of the neighborhood then-called the Harlem of the South, providing restful quarters to legends such as Jackie Robinson and Duke Ellington.

The site was razed in 2009 after part of the hotel, long abandoned by that time, collapsed – allowing Hanson Company to buy the property and construct Eggleston Plaza in its place.

“Jackson Ward is a celebration of black economic excellence,” Moon said. “There is no better way to continue that legacy by establishing this new restaurant on the same site as the hotel once owned by his grandfather.”

Croaker’s Spot has recently been growing its restaurant group elsewhere around Richmond and beyond.

The group operates the Croaker’s Spot restaurants in Manchester and at 39 River St. in Petersburg. It also operates Sugar’s Crab Shack at 2224 Chamberlayne Ave.

Outside of Richmond, the group now operates a location in Norfolk, and is planning to open a new location in Fredericksburg.

Further expansion is pending, which could include branching north into Washington, D.C.

“D.C. is somewhere we would like to be,” Moon said. “There are no plans at this time because we’re a small company, but we’re working our way there.”