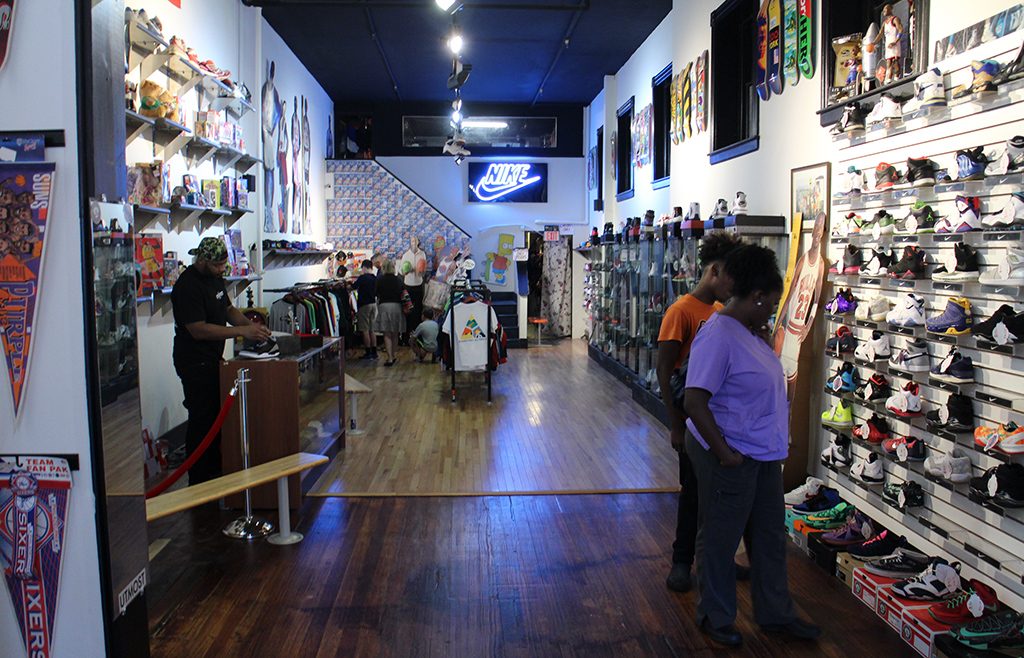 The Gallery at Round Two. (Michael Shaw)

On his way to Indiana from Virginia Beach, 12-year-old Jacob Averill begged his family to stop in Richmond.

His interest wasn’t in seeing common summer tourist attractions like the Capitol or Redskins training camp. Instead, Averill dragged his parents and little brother into an Arts District storefront selling inventory that predates his birth and playing music from artists better known to his generation for their acting chops than their verses.

“Happens all the time,” says Austin King, a clerk at sneaker buy-and-trade shop Round Two. “The other day we had a guy drive down from Minnesota just to check us out.”

Especially during summer afternoons, Round Two’s year-old storefront at 202 W. Broad St. – The Gallery by Round Two – bustles with customers, both local and out-of-state. Teens from the West End to Jackson Ward, as well as older “sneakerheads” looking for a waft of nostalgia, are drawn to Round Two’s ever-changing offering of vintage shoes, jackets, shirts and collectables, such as Air Jordans and Champion T’s. 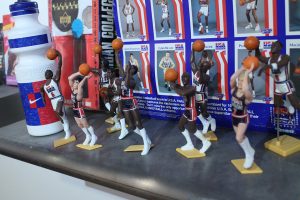 And even though they aren’t for sale, the hip-hop and basketball-inspired posters lining the walls of the shop prepare newcomers for Round Two’s niche. Old is “in” here.

Charlottesville native and VCU alum Luke Fracher teamed up with Ashburn friends Chris Russow and Sean Wotherspoon to start Round Two in 2013. Russow and Wotherspoon were running a resale website called Round Two Vintage, and Fracher was selling shoes on his own through eBay.

They opened up their first storefront at 104 W. Broad St. because the rent was cheaper than the commission eBay charged. That space was less than 300 square feet, but Fracher says they still packed 60 people inside. The trio also leased 102 W. Broad St. as an office for its web store, and have retained their original storefront for storage since moving up the block.

Multiple locations and landlords may have prompted other entrepreneurs to move, perhaps to an Innsbrook office park or a Midlothian shopping plaza. But sneaker-clenching teens walking in and out of Round Two have become just as much a part of the Arts District fabric as First Fridays.

“I would never move out of the city or off Broad Street,” Fracher says, adding that Round Two’s location helped it build a reputation with its local clientele. “It wouldn’t make sense for us.”

The Broad Street spot, which is five blocks east of competitor Wavy Kickz, has helped Round Two gain traction around Richmond. But social media marketing has made it a national name among sneakerheads.

More than 200,000 users follow Round Two’s Instagram accounts, which include one for Richmond and another for a new store on Melrose Avenue in West Hollywood that opened last year. There, sneaker aficionados get a first glimpse of new arrivals at both locations. Round Two also lists inventory, some of which can’t fit in either store, for sale on its website.

“All my friends follow them on Instagram,” says Jacob Averill, the 12-year-old from Virginia Beach. “They’re going to be so jealous when I told them I went here.”

Averill’s friends and others who can’t make the trek to Richmond can also live through the store on YouTube. More than 40,000 people subscribe to its channel, which houses a reality series documenting the store’s origins and progression. The show is about to premier its third season, with previous episodes ranging from 10,000 to 250,000 views. All of Round Two’s social media content is produced by its employees.

Some marketing efforts are less digital. C.J. Fayorsey, who has worked at Round Two for three years, spends a lot of time lacing sneakers with new string. The shoes may be old, but Round Two wants them to look “out-of-the-box.”

“It’s all about the presentation,” Fayorsey says.

Round Two sneakers range in price from $40 to $2,000. The Air Jordans are Round Two’s best shoe sellers, Fracher says. In the clothing department, vintage Nike, Champion, BAPE and Supreme remain fashionable well after they ship off the production line.

In an industry that looks to the past for its inventory, actually acquiring it takes a combination of old-school knowledge and new, digital techniques. Round Two employs buyers to scour the internet for product, taking notes about prices along the way and purchasing items that have the potential to sell. Those buyers use their pricing knowledge from the internet and from other resellers that Round Two management trusts to set their prices for buying items at their Richmond and West Hollywood storefront.

Fracher says Round Two tries to sell items for double their buyback price. Doing so with higher-end products, like rare Air Jordans, can be difficult because buyers of those shoes are more likely to know what they’re worth.

Yet changing tastes and manufacturers’ strategies may disrupt the company’s price point.

The brand’s 31st addition will be released on Sept. 3. But for resellers like Round Two, the design of the new Air Jordan signals a threat.

As Yahoo sneaker reporter Nick DePaula notes, the Air Jordan 31 is the first since the inaugural to place Nike’s Swoosh logo along the side. Nike’s marketing campaign plays up its retro-inspired design.

The shoe is already being worn by Jordan-sponsored basketball players Carmelo Anthony and Jimmy Butler at the 2016 Olympics and gaining buzz on blogs.

“We like older stuff, so when they (manufacturers) bring retros back it kind of hurts the value of the older stuff,” Fracher says.

Those new shoes flooded the market and priced out resellers like Round Two. Fracher says the company can’t even sell the updated Aqua 8’s anymore.

“Nike has just been saturating the market and trying to kill resellers,” Fracher says. “Why would they want to put money in our pockets when they could just keep it themselves?”

While I’m not into the sneaker culture, this is a great idea that’s looks like it’s being executed well by these entrepreneurs mixing a traditional store front with online sales and social media marketing. We need more businesses like this in Richmond.