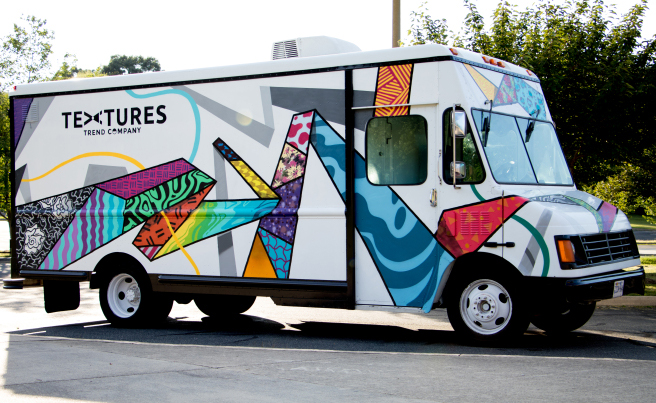 In setting out to fulfill the dream of owning their own clothing boutique, Christopher Suarez and Harneet Kalra hit a road block.

The husband-and-wife VCU alums’ search for a brick-and-mortar location in Richmond was proving too long and costly.

“We looked everywhere,” said Suarez, 28. “It would either be the perfect location and cost too much money to lease, or it would be affordable in an area that didn’t have much exposure.”

That’s when they decided to go the unconventional route: putting the store on wheels.

Earlier this summer the couple opened Textures Trend Co., a mobile storefront in a retro-fitted delivery truck. They bought the truck in June and had it up and running in July, complete with a dressing room, clothing racks and decorum.

The startup has been a true bootstrap operation for the pair, with both working full-time jobs to fund the $20,000 in costs to purchase and outfit the truck, and paying clothing distributors to fill the vehicle with styles and jewelry they hope will help them stand out in the Richmond retail scene. 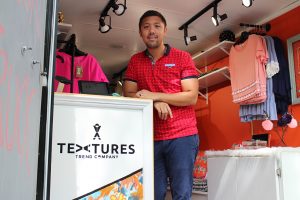 Christopher Suarez is the co-founder of Richmond-based Textures with his wife Harneet Kalra. (J. Elias O’Neal).

“It was less expensive, it was hip and it allowed us the flexibility to operate the store,” said Suarez, 28. “We felt it was a good idea that has not been totally introduced in Richmond.”

The couple met while working together at Dillard’s, Suarez said.

“I saw her and I thought she was stunning…she had this crazy style and I fell in love,” he said of Kalra. “We had a lot in common…but both of us really loved clothes and retail.”

Kalra, 31, spent seven years at Dillards’s and now works full-time for an insurance agency. Suarez’s stint at Dillard’s would lead him to retail management jobs at recognized clothing brands and retailers such as Nordstrom and Hollister. The Richmond native left his job with Colgate Palmolive as a traveling store trainer in January to focus full-time growing Texture.

“It really prepared us for this next venture,” Suarez said. “Those were good lessons for us to build on in order to create and focus on Textures.”

Fashion trucks are more common in bigger metro areas, but are beginning to catch on in Richmond.

In 2013, Lisa Fratkin launched Richmond-based Style Delivered, a business that sells handmade accessories out of a customized Mercedes van.

Last year, Rupa Singh and Amber Lantz launched Love This, which sells jewelry, accessories, bags and soaps from a renovated 20-by-8 1969 Airstream Globetrotter.

“Given Richmond’s size, it’s a fairly fashionable place,” Suarez said. “There is a market for this type of business in Richmond. You just have to be willing to find it.”

Finding a place to park the truck to set up shop has proven difficult in the city, Saurez said. Ordinances regarding retail trucks and certain neighborhood sidewalk provisions make it difficult to pop up in numerous parts of the city, such as Carytown, Manchester, Church Hill and Scott’s Addition neighborhoods, he said.

Then there’s the area’s many retail centers, some with strict covenants that forbid outside commercial interests from setting up on their premises.

“I totally get that,” Suarez said. “We’re not out to take away from anyone’s business.”

To combat those obstacles, Suarez said he is working one-on-one with area commercial brokers and shopping center owners to explain his concept in an attempt to park the truck at certain centers for a period of time.

Currently, Textures is a Friday fixture at Whole Foods in Short Pump, where the brightly colored truck is parked from 3 to 7 p.m. in the parking lot.

“The idea of the truck is to not stay in one place the whole time,” Suarez said. “It’s to go to as many places as possible in the day.”

In the meantime, most of Textures sales currently come from traveling to area festivals and online sales. The company is also looking to partner with area companies, such as Capital One and Dominion, to participate in corporate events and outings where their retail services could be a source of income and entertainment.

Given its confined space, Textures offers a wide selection of clothes – from T-shirts, polos and jeans for men, to jumpers and maxi skirts for women. Textures also caries custom jewelry crafted by Jessica Suiden, a local artist and jewelry teacher.

“Our prices range anywhere from $5 to about $75,” Suarez said. “We wanted to make sure that we were offering a selection that was an affordable price point for that 17-to-45-years-of-age demographic we wanted to reach.”

The truck itself was painted by local artist Mickael Broth – an artist responsible for murals across the city, including the Bernie Sanders mural in Scott’s Addition and the mural that welcomes customers to Carytown’s Mellow Mushroom.

Eventually, Suarez said he and his wife want to find a permanent location. But in the meantime, saddling up in the truck and hitting the trail has proven to be a good start.

“This is the beginning for us,” Suarez said. “Once we save enough and work hard, we plan to use that money to find a permanent location and build the clothing line we want right here in Richmond. This is home for us, and starting Textures here means a lot to us both.”

Curious how interested shoppers can find out about where Textures will be located at any given time.

Shoppers can find us mainly on facebook (Textures Trend Company and instagram (@texturestrend) on updates on where our pop-up will be. On a weekly basis our boutique is located right outside Whole Foods Short Pump every Friday for Fashion Truck Friday with Claville Fashion Truck! Thanks for the inquiry 🙂

They are not the only Fashion Truck in town – I have shopped with Claville who was the first fashion truck in town. They are often parked together. Claville posts their schedule on their Facebook page.