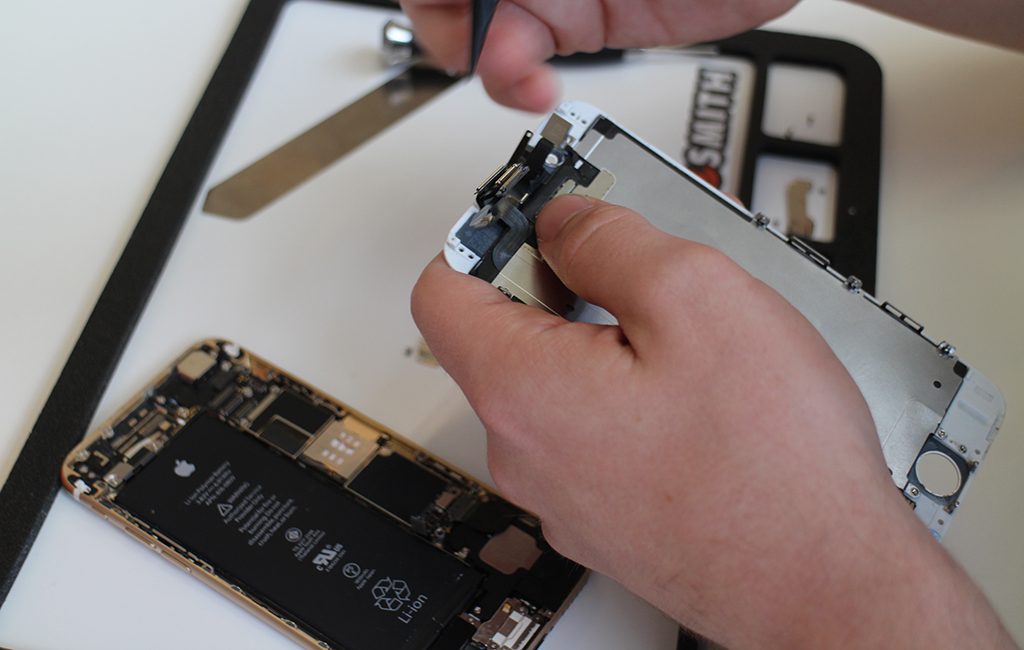 The sound of a dropped cell phone hitting the pavement or splashing into a toilet is music to the ears of a recently launched local startup.

GlassSmith, founded in February by local entrepreneur Blue Crump and business partner Jordan Jez, is aiming – like many startups these days – to be the “Uber of” something. In this case it’s cell phone repair – by operating a web-based platform that employs a small but growing army of on-demand technicians or GlassSmiths.

The company, which shares space in Manchester with Crump’s energy conservation firm Lumen, works by having customers go to its website, locate a technician in the area, pay for the service online and have that tech quickly dispatched to their location.

“The technician will be notified through an app we’ve developed specifically for them,” Jez said. “From the app, the GlassSmith will meet the customer and repair the phone.”

GlassSmith fixes a number of issues with the cellphone, ranging from cracked screens to more complicated matters, such as water damaging the motherboard. The firm also purchases old cell phones to be refurbished or used for parts.

The service is currently limited to iPhone repairs, but Crump said they plan to add iPad and Android service repairs in the coming months.

“We want to get started and offer this service first,” Jez said of the iPhone repairs. “Once we have the routine down, and give our technicians the proper training, we’ll add the other services for the other devices.” 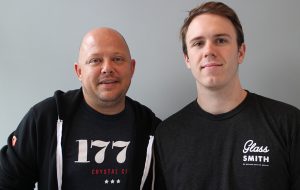 Crump and Jez are handling customer service requests for the Richmond-based colleges of VCU, Virginia Union University and the University of Richmond.

Crump said the college town demographic allows the company to tap into workers interested in the flexibility and making a quick buck in the so-called “gig economy” that has helped fuel the likes of Uber, TaskRabbit and other services.

“We had over 450 people apply for seven positions,” Crump said. “That showed us that the hiring pool for this type of job was greatest at the university level, and helped us cut down on hiring costs.”

To keep technicians up on their craft, Crump said the firm has hired a full-time “GlassSmith Pro,” who will serve as primary adviser and technician trainer on how to repair various mobile devices. The GlassSmith Pro will also handle customer service requests in Richmond.

Each technician will make $35 per repair, Crump said.

A percentage of the total cost of a repair, on average more than 50 percent, is returned to the company to recoup costs for building and maintaining its app and website, and providing the technician with the equipment they need to repair the phones.

“The technicians come out of pocket for nothing,” Crump said. “We provide them with everything.”

The technicians are not limited to the confines to their respective campus to make repairs, Crump said.

“If they go to school in Auburn, and happen to live in Baltimore, and they’re going home for Christmas break, they can fill requests from Baltimore, or New York, or wherever,” Crump said. “There are no limits to their geography.”

Both Jez and Crump had plenty of personal inspiration in launching GlassSmith.

The product of a large family, Jez, a Midlothian native and Appalachian State University alumnus, can remember swapping upgrades for new cell phones with his brothers after one of them broke a phone.

“We were always stealing each other’s upgrades because something always happened to our phones,” said Jez, who has worked with Crump at Lumen. “We needed a phone, and instead of waiting at the Apple store, or sending it back to the manufacturer, this was the best option we had.”

For Crump, whose other companies over the years have included Cityspace Solar and Cityspace Construction, the challenge of trying to finagle his cell phone out of the hands of one of his five daughters proved to have fatal consequences for his mobile device.

Crump said he has put about $100,000 of his own capital into the startup, along with the $20,000 GlassSmith received from being part of the 2016 class of local accelerator Lighthouse Labs.

GlassSmith had a chance this week to win another pool of capital as a finalist of the Virginia Velocity Tour – a competition that’s part of Governor Terry McAuliffe’s economic plan to incubate job growth in the commonwealth.

The tour made a pit stop in Richmond Tuesday in search of the best creative and manufacturing startup in the state, with the winner taking home $25,000.

When the dust settled and the judging – handled by Aaron Montgomery, CEO of Richmond-based CarLotz; Scott Telleson, CEO of NRV; Carrie Roth, CEO of the Virginia BioTechnology Research Park; and Anna Mason, director of Rise of the Rest Investments – was complete, Norfolk-based Hamilton Perkins Collection, which  took home the grand prize. 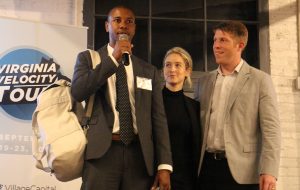 Founded by 30-year-old Hamilton Perkins in July, the company makes luxury travel bags out of recycled water bottles from Haiti.

Eventually, Crump and Jez would like to expand their brand to other universities. However, they are waiting to gather enough data about the demand for their service before launching an expansion.

“We’re going to look at how things go at the end of the semester and reassess,” Crump said. “Some people would do it completely different, and not invest so much at the beginning. But we felt that it was necessary to get started.”

Once the firm collects its data from its technicians from the fall semester, Crump said the firm plans to go after investor dollars to grow the firm beyond its current collegiate footprint.

GlassSmith is not without competition. In the on-demand portion of the cellphone repair market there’s iCracked, which was founded in 2010 and has more than 2,800 repair techs across the U.S. and 11 countries. The firm reported about $25 million in revenue in 2014, according to a Forbes magazine report.

Crump said GlassSmith has its eye more on local competition.

“Our competition is going to be the manufacturers and the local repair shops,” he said. “We don’t see iCracked as a direct competitor because they are not heavily concentrated in this area.”

If anything, Crump sees iCracked’s growth as a validation for GlassSmith’s model.

“There is plenty of room for market share,” he said. “Demand for this service is going to be constant.”

Such a great idea. This is exactly what VCU needs. Glass Smith a huge convenience over having to travel to a phone repair shop.

This sounds amazing, I love the idea of people coming to me rather than me having to travel

What an amazing business model! It’s great to see that more and more startups are coming out of Richmond, Virginia. Can’t wait to see GlassSmith’s growth in the coming months.

Love this! So much better than just leaving your phone with someone at a repair shop or waiting in some crazy line at Apple!

Working in hospitality, this will be a great local service we can offer to our guests! Another great idea for our awesome city!

These guys fixed my sisters phone last week! Such a great idea and super convenient! I can’t wait to see what these guys do in the coming months!

What a great business model – especially since the nearest Apple store to VCU’s campus is all the way in Short Pump. Very excited to see how Glass Smith takes off in the upcoming months and years!