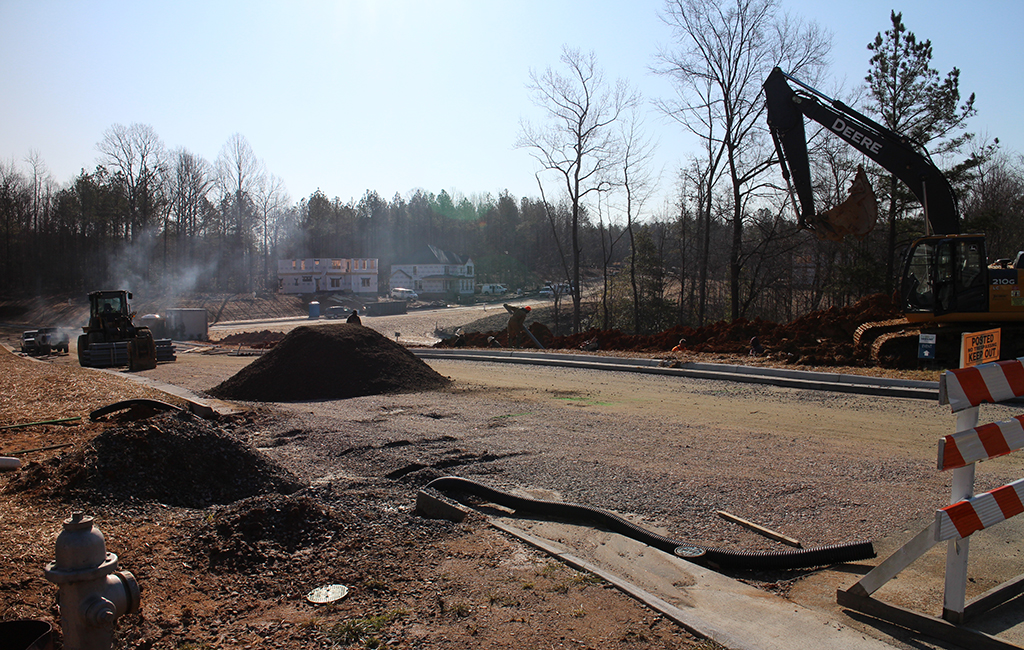 Construction in Harpers Mill, an active development despite the proffers. (Jonathan Spiers)

Chesterfield supervisors voted unanimously Wednesday to reduce the county’s cash proffer for residential development – the first such reduction in 25 years.

The board followed the recommendation of County Administrator Joseph Casey to reduce the proffer maximum from $18,966 to $9,400 per dwelling unit and restrict the use of those payments to transportation improvements.

Previously, the proffers – paid to offset impacts of residential development on public infrastructure – also went to schools and other public facilities. But Casey has said enough funding exists from outstanding proffer agreements and other revenue sources to fund projects in the school system’s five-year capital improvement plan.

Casey, who started with the county in July, said a goal of the policy change is to help spur development in corridors the county is targeting for revitalization and preservation. He has said the previous proffer amount had created an impediment to development in those areas.

Supervisors supported the change to the policy, echoing a desire to revitalize those areas and noting the change would help the county score higher in the state’s funding formula for road improvement projects. The vote followed months of discussions with area stakeholders, including the Home Building Association of Richmond, the Chesterfield Chamber of Commerce and other trade and business groups.

“We’re committed to getting in front of infrastructure, particularly transportation,” Dale District supervisor Jim Holland said, adding that he was comfortable that the county could handle the transition in funding for schools and other capital needs.

“This is a transitional phase for us in the community,” he said.

“I want to assure the public that our schools’ capital improvement plan will continue to be funded,” said Chairman Steve Elswick, adding that the rest of the county’s infrastructure needs would not be affected.

“I want citizens to also know, whether we pass this or we don’t pass this, there will be no tax rate increase to our citizens,” he said.

Immediately following the vote, which did not involve a public hearing, the Chesterfield Chamber of Commerce issued a release applauding the move.

“The Chesterfield Chamber believes this new policy positions the County to be transparent and pragmatic in establishing proffers that are tied to the actual impacts of development,” the release stated. “In addition, we believe that it is well suited to support revitalization efforts, affordable housing initiatives and job creation.”

The release quoted chamber chairman Bill Foster as saying: “I know that there are members of our community who have advocated strongly for no proffers at all, but I believe that this outcome positions the County to have a balanced and sensible approach to funding the direct transportation impacts of development through cash proffers while ensuring that we have more sustainable sources of funding for school and other infrastructure improvements.

“I am very encouraged by the way the Board and Dr. Casey’s administration worked as a team to come up with a thoughtful response to our concerns as a business community and as citizens.”

Andrew Clark, government affairs director with the Home Building Association of Richmond, added: “The board’s unanimous support of the proposed cash proffer reform is indicative of how collaborative the dialogue was between the development industry, the administration, and Chesterfield residents.

“It’s also a clear sign of the county’s commitment to strengthening its transportation infrastructure, revitalizing key corridors across the county, and making Chesterfield an even stronger competitor regionally and statewide,” he said. “We look forward to continuing our partnership with the County.”

Dr. Casey has a very commanding presence at the microphone. He clearly explained how the funding for public infrastructure will work for the County without raising taxes. I think everyone was surprised by the agreement reached but it was the result of a lot of hard work from the county staff, the BOS, and the homebuilders association. Kudos to all involved.

Great move by Chesterfield County. Development has been struggling the past 10 or so years. This will be a good deal for all.

Congratulations, Chesterfield. You just reduced new home prices by $9,566 at a time when prices are far too high. Excellent job.

Great move in the right direction, but keep going and eliminate cash Proffers altogether. The Short Pump area of Henrico County has taken off. If you really want great commercial tax revenue and first class development, eliminate cash Proffers altogether. Work with developers to come up with win-win proposals. Remove barriers and give incentives to encourage world class development.