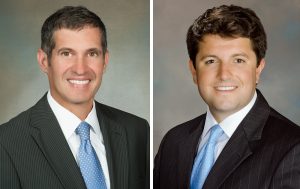 As it closes its latest fund, a Richmond development firm has also closed on a Virginia Beach apartment building.

Thalhimer Realty Partners on Oct. 25 bought the Bayville Apartments at 1512 Kindly Lane in Virginia Beach, TRP’s Evan Magrill said. The company paid $23.15 million for the 240-unit building, which it purchased from Federal Capital Partners of Maryland.

Magrill said Bayville has undergone renovations and that TRP will look to spruce up the property.

He said the firm used money for the Bayville deal from a new fund TRP formed late last year to go after multifamily properties in secondary markets in Virginia and the Carolinas. The focus of the fund, dubbed Thalheimer Multifamily Fund, is on Class A and Class B properties.

Concluded on Tuesday, the fund raised $25.8 million, which will be used as leverage for $75 million to $80 million in deals, said Magrill, who is managing the fund along with fellow TRP executive Matt Raggi. They said between 50 and 100 investors contributed to the fund, with the bulk of whom TRP had an established relationship.

“The market to purchase multifamily has been exceptionally competitive in recent years, and we’ve been looking hard to find a good deal to be the fund’s first acquisition,” Raggi said. “We look forward to getting started on the renovations at Bayville while we continue to look for other properties that are a good fit for the fund.”

Unlike other funds TRP has done in the past, the multifamily fund began raising money before any potential deals had been identified.

Wink Ewing and Mike Marshall of ARA Newmark represented the seller in the Bayville transaction.