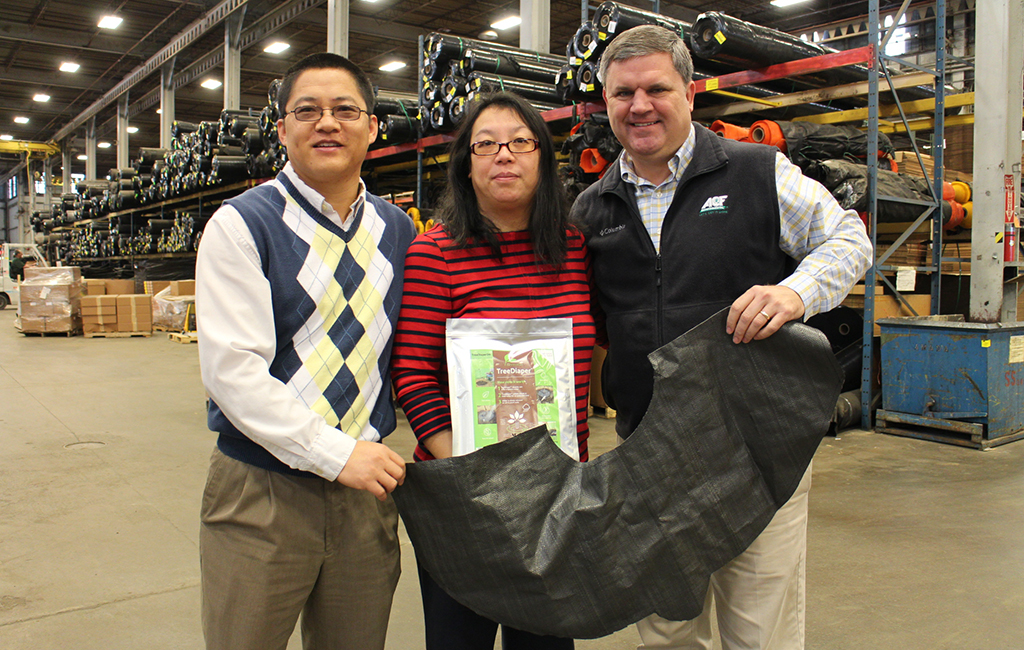 A local startup aimed at recycling disposable diapers has struck a deal with a Richmond-based manufacturer and distributor to get its product – “TreeDiaper” – out into the national market.

ACF Environmental, which produces materials used for erosion control and stormwater management, has signed an exclusive U.S. manufacturing and distribution deal with Ashland-based Zynnovation, the 6-year-old company that developed TreeDiaper.

The deal was signed Nov. 25. The companies did not disclose the terms.

The agreement provides Zynnovation with an outlet to broadly distribute TreeDiaper – a collar-shaped tree mat that absorbs and retains water and is placed at the base of young trees and other plants to hydrate them over extended periods of time.

Husband-and-wife team Wei Zhang and Hailing Yang developed TreeDiaper with materials used in disposable baby diapers. Their goal is for the product to be made from diapers exclusively, creating a channel for recycling diapers and giving them a longer life cycle before they are put into landfills.

But diaper recycling is not yet economically feasible, the couple said, so the product is currently made with agricultural-grade superabsorbent polymers that are enclosed within geotextiles – the same materials that ACF already manufactures and distributes to construction companies and municipalities nationwide from its facility in Richmond’s Southside. 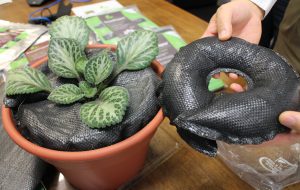 The collar-shaped TreeDiaper is designed to retain and release water over extended periods of time. (Jonathan Spiers)

Zhang and Yang – Chinese immigrants who moved to Richmond after attending Virginia Tech, where they received doctorates in chemical engineering and chemistry, respectively – said the deal will help sales that in turn will help fund their research into an economic business model for diaper recycling.

ACF, meanwhile, will have additional product to put out during its slower part of the year, said David Kelley, director of business development.

“We really saw this as an opportunity for our manufacturing department, because when we slow down – the construction season and stormwater season slows down nationwide – this opportunity would actually pick up,” Kelley said.

He said ACF became aware of Zynnovation when one its partners saw the couple’s table at the Richmond Home + Garden Show in March – one of many trade shows the couple has attended to pitch their product.

“His wife goes, ‘Honey, that’s your fabric,’ so he stopped and went over and that started the conversation,” Kelley said.

“When I met them in the Richmond Home + Garden Show, I was very happy,” Yang said, “because their expertise and strengths is in the manufacturing. Our strength is as a research and development company.”

ACF is adding TreeDiaper to its line that already includes products with such names as Dirtbag and GutterBuddy, which Kelley said are marketed by salespeople up and down the East Coast and distributed nationally through a network of companies that are likewise in the low-impact, green-infrastructure and stormwater and erosion management fields.

“We know the market potential is huge,” Kelley said, describing potential customers as ranging “from homeowners to DOTs.” 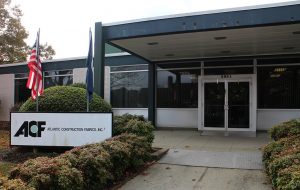 ACF’s facility at 2831 Cardwell Road in the Southside. (Jonathan Spiers)

“There’s a lot of good that comes out of a product that can rehydrate itself,” he said. “The tree canopy movement in this country and the cities is huge. Cities invest a lot of money in buying these trees, and they need to protect them. Especially in the drought areas of the United States, it’s a wonderful concept.”

Zhang and Yang’s pitch is that TreeDiaper is preferable to tree watering bags that need to be refilled periodically, requiring manpower and trucks that add expense and impacts on the environment. They did a test-run of TreeDiaper coordinated with the City of Richmond.

TreeDiaper currently sells for between $16 and $65, depending on size and styles that are tailored to different plants. Kelley said the products are being rolled out right away, in part to make them in time for the holiday season.

Kelley said the production doesn’t require additional cost because the materials and machines needed for TreeDiaper are already available and in use at ACF’s facility at 2831 Cardwell Road. The 11-acre site, just off Jefferson Davis Highway, includes a 100,000-square-foot warehouse and a 50,000-square-foot warehouse that were previously used as a machine shop for nearby Philip Morris.

Kelley said ACF has been in Richmond for 35 years, starting out as a silt fence distributor. Its workforce totals about 200 employees.

As it rolls out TreeDiaper to a wider market, Zynnovation plans to put proceeds from sales toward funding its recycling research and figuring out a way to make it economically feasible. A graduate of the Dominion Resources Innovation Center, the company was housed for one year in the Virginia Biotechnology Research Park downtown before Yang wrote a proposal to the National Science Foundation that she said resulted in two grants totaling $300,000.

While the foundation provided that funding for development, Zhang said it didn’t think the diaper recycling concept was economically feasible to support the project beyond those grants – hence the couple’s need to research the technology further. Because diapers are made from multiple materials, Yang said, disposing of them in landfills is considered the easier way to go, as she said the recycling industry focuses on individual materials and most facilities do not have the technology needed to separate them.

“So we’re building revenue, and then we will do large-scale recycling,” Zhang said. “We have tested the market, we’ve gone to many trade shows, the feedback from customers is great; there’s only one thing we need to do: scale up the production.”

Congratulations Wei and Hailing! We love the tree diaper in Ashland. Ours are getting a refill today with the rain.

Thank you Nora. Yes, the rain has done the refill. I worried about the gravel cover when you first installed. But it seemed like the TreeDiapers are doing fine.

Congratulations Zynovation! I am using your TreeDiapers on my camellia and azalea bushes. Should I leave them in place for the winter or take them up until warm weather returns? Thanks! Mary Rowan

Mary, You can leave them outside. Cold won’t damage them at all. The rain we usually have in winter and the melted snow water in early spring will recharge them very well.

We are excited about this partnership and opportunity!