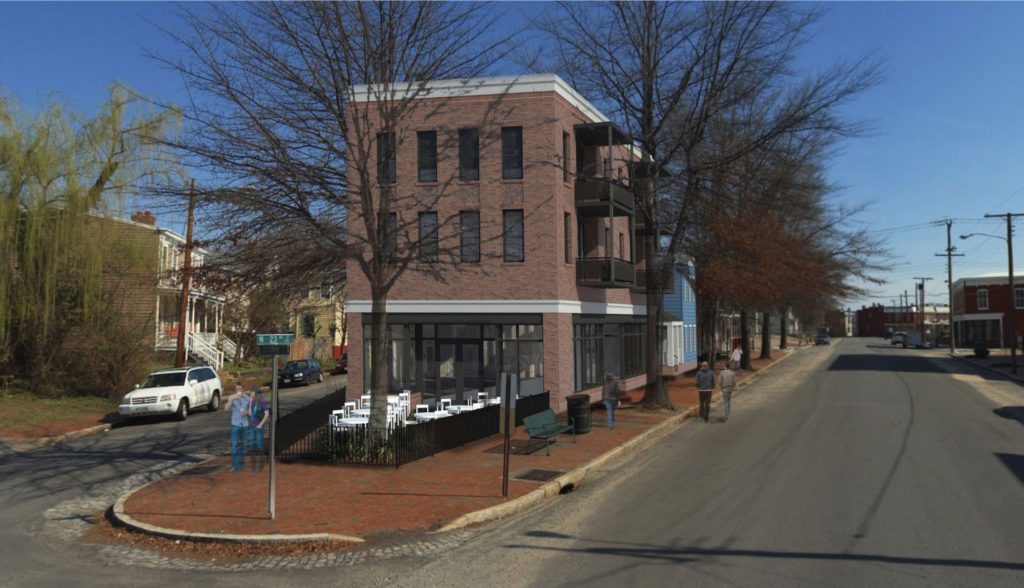 A rendering of planned developments at the 23rd Street Triangle.

Matt Jarreau knows a deal when he sees one – and he seems to have an eye lately for triangles.

As part of his bid to move more into larger developments, the local real estate agent and broker with Hometown Realty is working on plans for about $9 million of mixed-use projects to take shape on triangular lots in Church Hill.

He saw something in the triangular plot, but at the time didn’t know what it could become. It was a textbook play in buy low and wait.

Then came the redo of the building that now houses Metzger Bar & Butchery, a popular restaurant close to his North 23rd Street properties.

“When Metzger’s was purchased by (local real estate investor) Daniil Kleyman and he redid the space into this great restaurant and bar space, and added residential units to it…that really changed everything,” Jarreau said.  “It stabilized that part of the neighborhood.”

That gave Jarreau the incentive for what he now calls the 23rd Street Triangle, a three-story, 6,600-square-foot structure to rise on the property, bounded by 23rd, Jessamine and Cedar streets.

The $1 million mixed-use building will include two one-bedroom, one-bathroom units facing the front of the project, while a pair of two-bedroom, two-bathroom units will be constructed in the rear, Jarreau said.

The ground floor will house a 1,760-square-foot restaurant with about 720 square feet of outdoor patio space where Jessamine and North 23rd streets merge.

“I’m seeking an interesting food concept for that space,” Jarreau said. “Something with a bar, something with good food that will serve the neighborhood.”

The city’s architectural review committee approved the 23rd Street Triangle plans this summer, and is set to go before the urban design committee Jan. 5. 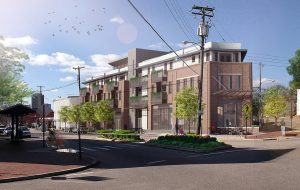 A rendering of planned developments at the Jefferson Triangle.

Jarreau, who has built several infill duplexes and townhomes on vacant lots around Church Hill, hopes to start construction on 23rd Street Triangle by mid-January, with completion by the third quarter of 2017. Richmond-based ADO Architects is overseeing the design, while Richmond-based UrbanCore Construction is set to build the development.

It’s Jarreau’s first independent, large-scale development project – and he’s already hungry for something bigger. He and Kleyman are in the early stages of another triangle lot project around the corner near the roundabout at North 25th Street and Jefferson Avenue.

Jarreau said the project, which is in the planning stages, would house 27 apartments and 12,000 square feet of commercial space, including a restaurant space. It includes razing the existing office building structures at 2416 Jefferson Ave.

For starters, much of the neighborhood is zoned to include ground level commercial space, first- and second-time homebuyers are moving into the neighborhood, and city and private entities plan to keep the area walkable.

“I think this is the best place to live in the city,” said Jarreau, a 10-year resident of Church Hill. “It’s only going to get better.”

In an anecdote that illustrates how Church Hill has transformed in recent years, Jarreau said he made a peculiar discovery while tending to his 23rd Street Triangle lot a couple years ago.

“We were cleaning the lot for a garden, and we dug up about four or five unused .38-caliber shells,” Jarreau said. “It was interesting to say the least.”

Its good to see these in-fills developments all over Church Hill. Even “small” projects bring the city new life. When I moved to Richmond 22 years ago and looked it over for development opportunities, I was told NEVER to go north of Broad Street. How things have changed! Now, the neighborhood is terrific and many of the best restaurants in the city are located there.

Nice, imaginative use of space.

Great to see this project going in

Love the infill design and use of the space.

PS: Bruce now it is don’t go past O/P Streets and until the City actually addresses some of the project neighborhoods that is where the work will stop for retail and infill apartments.

Thank you for your comments and interest in the project and greater neighborhood, this truly is the best place to live! I’m very excited to see this come to fruition. We will keep you all posted with new projects as they are being introduced!