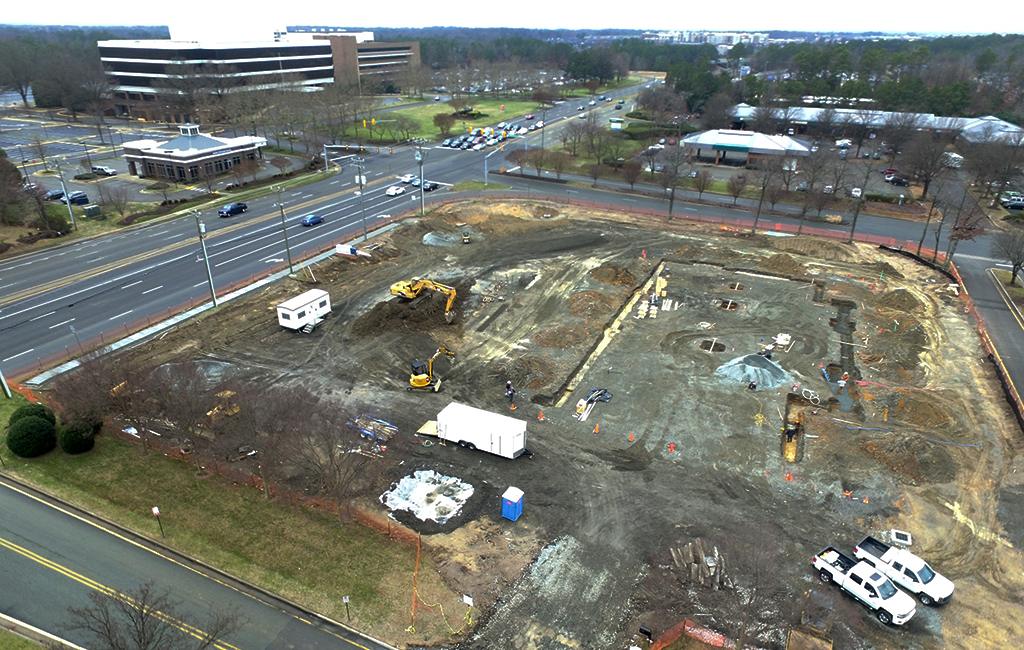 Crews work on the 12,300-square-foot retail property at 4101 Dominion Blvd., on the corner of West Broad Street. (Kieran McQuilkin)

The site of a recently demolished gas station near the front of Innsbrook is being redeveloped into a new retail strip that’s already landed a full slate of tenants.

Belleau Wood’s Ed Tam confirmed the company is behind the project, its first in metro Richmond. He said it purchased the 2.46-acre site last summer for nearly $3 million and demolition and construction began late last year.

Dubbed the Dominion Shoppes, the center is fully leased with a mix of regional and national tenants, including Noodles & Company, Starbucks and American Family Care.

“The Innsbrook area is a great place to be right now,” Tam said. “We’re right along Broad Street and at an intersection where we have great visibility…we think the shopping center is going to perform very, very well.”

Dominion Shoppes will be ready for tenants in the third quarter of 2017, Tam said.

Connie Jordan Nielsen and Alicia Farrell, brokers with Richmond-based Cushman & Wakefield | Thalhimer, represented Belleau Wood in its purchase of the property and handled leasing prior to construction.

With financing from Bank of North Carolina, Tam said his firm is investing about $6 million in the project.

Galax-based Candor Construction is the general contractor, while Richmond-based Timmons Group completed the engineering and design.

While not specifying areas, Tam said his company is looking at other projects in metro Richmond, adding that the region’s affordability and growing job base make the area attractive for investment.

This is great. Perhaps they will now consider putting in sidewalks in Innsbrook so that workers can walk to these places for lunch/coffee and get some exercise in the process!

First step might be some pedestrian crossings (e.g., Dominion Blvd).

Great comment. I hope someone in charge of the planning and development of Innsbrook and it’s shopping centers sees this and listens if they haven’t already thought of putting in sidewalks that connect the businesses to supporting commerce. Would be totally sweet if they connected the existing walkways and paths as well and maybe one day turn the entire area into a pedestrian campus. The landscaping and curation of the property is so nice already, it just makes sense, but admittedly I’m no expert on what the real challenges and economic cost/benefit would be; great idea though Sarah, love it.

I’m so excited about the new shops coming to our area its always great to have more varieties! And choices I wish them all the best of luck and fortune!
You go innsbrook!!! The best area in RVA!