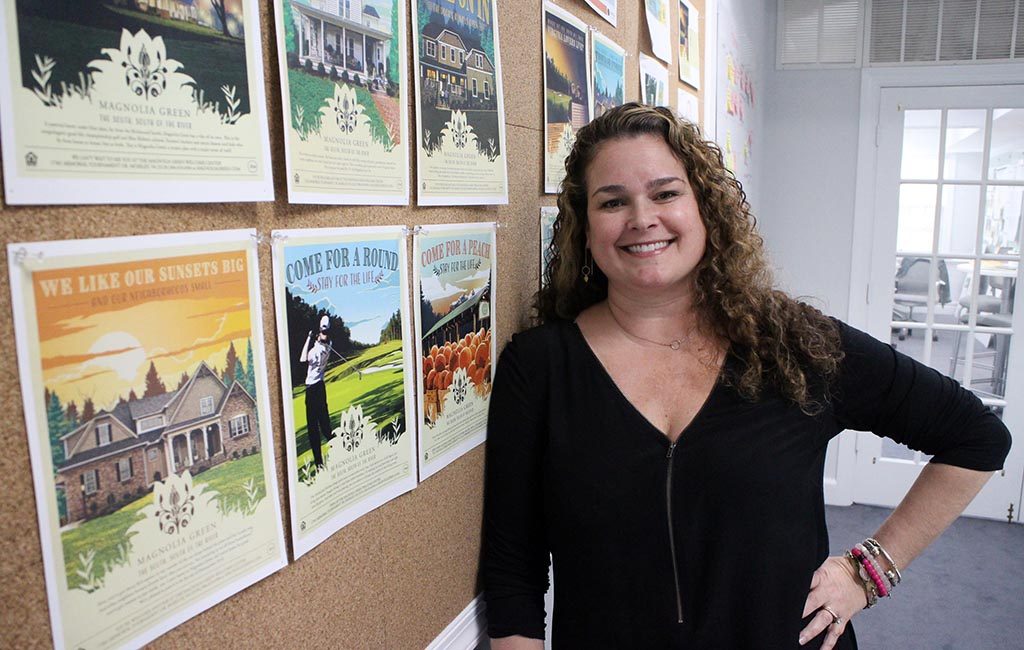 After 20 years at Martin, where she helped design Coca-Cola’s first website and developed campaigns for national clients such as Hanes, Moen and Pizza Hut, Elkin left the Richmond advertising giant to freelance and teach at the VCU Brandcenter, where she is an adjunct professor.

It was at the Brandcenter where she met Lauren Cox Sweeney, founder of Dotted Line, who she said she clicked with creatively. Soon enough, after building the 3-year-old business through friends and referrals, they were making the agency’s first formal campaign pitch, landing Chesterfield community Magnolia Green with a promotional campaign that rolled out this month.

Elkin talked with BizSense about landing that campaign, the creative concept behind it and how she collaborates with others to come up with new ideas. The following is an edited transcript:

Richmond BizSense: Tell us about the campaign for Magnolia Green. How did you make your pitch?

Amy Elkin: We went in there with three campaign directions. You can’t just go in there with one; you’ve got to go in with a range. We went in there with one that’s a little bit closer in to where they’ve been, and then one that was definitely pushing them, but we knew it was right. We had done a lot of research to find out what were the strengths and weaknesses of Magnolia Green, and all the work came off the same brief and same strategy. We just pushed it creatively into different territories.

They loved the “South of the River” campaign. We won it, and we did it – fast. We won it in October, and then, November, December, January – we’re done. This is something that would have taken us a year at a bigger agency, and we just knocked it out of the ballpark in three months. Not that I always want to make speed be the habit, but we were able to work faster I think because we’re a smaller team and you’re able to be more nimble.

RBS: What made you want to join a smaller firm? 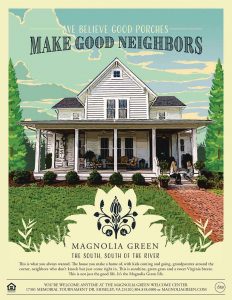 One of the posters that is part of Dotted Line’s “South of the River” campaign for Magnolia Green.

AE: I always have been drawn to smaller teams. When I was at Martin, I did my best work in smaller team settings, because you can really work together to own it and really build that relationship with the client and do work that we’re all going to be proud of and are invested in.

Lauren’s small team – it’s predominantly women, and we’re just all go-getters. Everybody is just super-motivated and ambitious and determined, and we’re all willing to wear whatever hat you need to wear to get it done. That’s what I like: to just get in there and get your hands dirty and do whatever it takes. I don’t like people being siloed with titles and roles and ‘That’s not my job.’ We’re in there to do this together. Work is about collaboration.

RBS: You spent two decades at Martin. Why did you decide to leave?

AE: It shocked everybody, because I was what you would call a “lifer.” The Martin Agency is amazing. It creates a family environment, and as long as you’re growing and happy, why do you have to leave? But I just felt like it was time to do something different.

I started right out of VCU undergrad in the interactive department as a designer on Coca-Cola’s first website. I didn’t know anything about advertising back then. I didn’t even know The Martin Agency did advertising when I went there. Truly, I wanted to work at Pixar and do “Toy Story” animations. The agency wasn’t what you would call “integrated.” You had creative people who were focusing on print and TV, and then you had digital people and you had a direct mail division and a retail division.

Mike Hughes was my boss, and I kept talking about how we needed to all work together – that when a creative team comes up with a big idea, they should be responsible for seeing how that work can transcend mediums. We should be inventing new mediums. This went on for years, and I did it: I was one of the first art directors who actually hands-on created all the different mediums for an integrated campaign. I loved it.

RBS: Describe your creative process. Do you have any rituals you do to get into a creative mindset?

AE: Creative people all work differently, so you have to respect that. You have to give them some time and some space, and you have to explore every angle, even if they’re not right. In the beginning, you can’t say no to anything. You have to continue to say, “But what if?” So you’re continuing to jump off of each other and push each other further.

It really is just getting comfortable with each other and just throwing out as many things as you can possibly throw out. Then you’ll start bouncing off each other and figuring out where are the areas that you’re agreeing are the most fertile. That’s something that I tell my students: You know that you have a big idea when you can see that it’s going to transcend mediums – that you can have a product idea, you can do a stunt, you can do all these different things that can come out of this one big idea. If you’re only creating an ad, then you don’t have it.

RBS: Do you ever get blocked for ideas? How do you get the creative juices flowing?

AE: I get a lot of my ideas when I’m driving. I live out in the country, so I’m driving all the time. There’s something about shutting down and not being able to be on your phone and listening to music and finally relaxing and freeing your mind. That is where I have a lot of ideas.

If you’re blocking on an idea, you just need to step away. You’re over-thinking it. There are a lot of techniques. One that I teach my students is a post-it note technique. It’s about generating a ton of ideas in a fast period – as many ideas as you can come up with for this one problem you’re trying to solve in a minute, and then you just stop. And then you do it all over again, and you can’t have any of the same ideas. It’s just about trying to get over the hurdles and just throw them out there. If you have a hundred ideas, there’s something good in there.

RBS: Are there other creative shops in Richmond whose work you admire?

AE: When you’re at Martin, you’re pretty engulfed in a much more national, if not global, industry, and we weren’t very aware of the things that were going on in Richmond. That has been what is so exciting to me right now, that there are so many opportunities and wonderful resources in Richmond, and knowing that we’re growing a small agency that’s continuing to fuel the creative talent in Richmond is thrilling to me.

I’m just now starting to really get my head around who are the other agencies and what are their strengths. Deb Hagan was a friend of mine at Martin and she’s over at Barber Martin (Agency) now. They’ve done some cool stuff. I like the Adolf Jewelers “Do it on the Rocks” campaign. That was cool. That’s something that people can talk about, and I like that it has that local connection.

RBS: Have you ever had a campaign that was the one that got away? One that you were really excited to work on but for some reason you weren’t able to do what you envisioned?

AE: Moen faucets was a brand that we had. We did global work for them for maybe four years. We had several campaigns that did well and won awards, but I still feel like we could’ve done better. It was a big campaign, but it felt like it was lots of mini-campaigns and we needed a bigger umbrella campaign that held it all. In our head, we knew where it was going to go, and I don’t know that we were able to convince the client of where it could go. They ended up having a management shift, and we parted ways. That happened at the same time I left Martin, so even if we had sold it, I wouldn’t have seen it through.