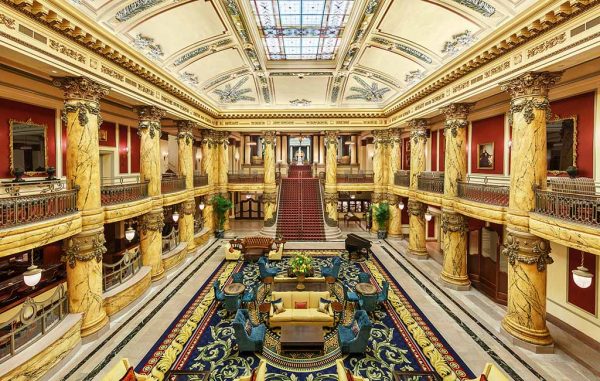 The Jefferson’s century-old rotunda ceiling was restored during the renovation. (Courtesy Jefferson Hotel)

A five-star facelift four years in the making is getting its grand reveal at a downtown Richmond landmark.

The Jefferson Hotel has wrapped up a three-phase renovation that has been underway since 2013. The construction chutes that lined the building’s exterior walls are no more, marking an end to the project that refreshed the hotel’s common areas and reduced its room count while enlarging its floor plans.

The number of rooms was reduced from 262 to 181, allowing for expansions of about 500 square feet to each. The enlarged floor plans, including 15 suites, include entry foyers, dressing areas and new marbled bathrooms, with bathtubs, showers and vanity mirrors with TV screens within them.

The hotel also renovated common areas with new color palates, draperies, LED lighting and carpeting. The century-old rotunda ceiling was restored, and new furnishings were placed in the rotunda and palm court lobbies, as well as in the Lemaire restaurant. 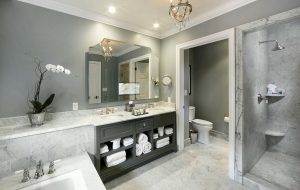 The furnishings had been stored in the former Second Baptist Church building across Adams Street from the hotel, which owns the columned building that likewise fronts Franklin Street. The hotel continues to use the building as storage space, Crisp said.

The renovations bring a new look to the Jefferson, which was built in 1895 and is owned by Riverstone Group, the real estate development arm of Richmond businessman and philanthropist Bill Goodwin’s CCA Industries.

The hotel has been recognized as a AAA Five Diamond and Forbes Five Star award winner for 2017 – one of 51 hotels in the country to hold both designations. Room rates start at about $250 per night.

The renovation of the rooms is great news for such a lovely hotel. I stayed there about five years ago and though the common areas were still beautiful, the rooms left a lot to be desired. Charging for coffee in the rooms (pot or room service) didn’t make this coffee lover too happy either. Seemed very chintzy for a hotel of this caliber.

You do know that’s not the Rotunda in the photo, right? The Rotunda is the round reception room with a domed ceiling and a statue of TJ.

Jackie, that photo is the rotunda room. There was an article in the RTD about it last summer: http://www.richmond.com/business/local/the-jefferson-hotel-s-rotunda-lobby-undergoing-renovation/article_5c65b84b-4015-5c49-8d1a-33de5f22d24e.html

Doesn’t a rotunda have to be based on a circular floor? That floor doesn’t look circular.

I thought the same thing, but apparently it can also be simply a large common area. This is what Merriam-Webster says:

Definition of rotunda
1) a round building; especially one covered by a dome

You learn something every day.