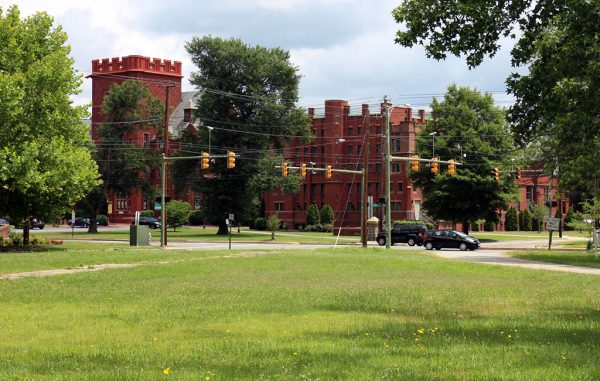 The 33-acre Westwood Tract is owned by nearby Union Presbyterian Seminary. (Jonathan Spiers)

Editor’s note: This story has been updated to include a statement from Union Presbyterian Seminary that was received after the story went press and to clarify the status of demolition of the site.

Opponents of a controversial planned apartment project in North Richmond were denied in their fight Wednesday night to convince the city to reconsider a prior zoning decision that ruled construction on the development could potentially proceed.

The city’s Board of Zoning Appeals rejected the appeal filed by residents of Sherwood Park and Ginter Park neighborhoods, which was aimed at halting construction of a 301-unit apartment building on 15 acres of a 33-acre area known as Westwood Tract, owned by the nearby Union Presbyterian Seminary.

Residents and community members argued that the tract was mistakenly zoned as multi-family residential, and should instead be zoned for institutional use per a 1953 ordinance uncovered by nearby homeowner Sarah Driggs.

Board members voted 4-1 in favor of denying the appeal, ruling that the zoning administrator, William Davidson, had acted appropriately in approving the Seminary’s initial request for the project.

Wednesday’s decision doesn’t immediately allow construction to begin. Demolition on the site continues, after which construction could commence, depending on the outcome of a lawsuit brought about by 12 residents of the area challenging the project. That case will be heard in Richmond circuit court on June 14.

Residents of the neighborhoods and members of the Union Presbyterian Seminary packed a Richmond City Hall conference room for the Board’s final word on the appeal. 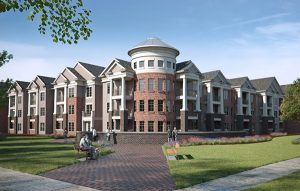 Board member Roger York addressed the Board of Zoning Appeals’ jurisdiction in the overall case to begin the meeting.

He said the board likely would not be able to rule if the appellants in the case were “aggrieved” by the development, as there was no precedent for what constitutes being aggrieved.

Complaints against the development concerning storm water overload, increased traffic and diminished property values were outside of the board’s exact ability to determine, York said.

The board had guidance on two other issues the appeal brought forth: whether a letter asking the zoning administrator to appeal the decision was filed within 30 days, and whether Davidson’s decision to zone the Westwood Tract as multi-family residential was in error.

Residents said Davidson’s 2015 decision to allow the $50 million project was inconsistent with the tract’s intended use, and that he was incorrect in refusing to investigate their initial request.

However, after hearing testimony from Davidson and Ginter Park residents, the Seminary, the zoning administrator and Bristol Development Group, who is handling the buildings’ construction, the board determined that Davidson had acted “properly,” and that the 1953 ordinance was not sufficient grounds to reinvestigate.

The board’s sole dissenting voice was Mary J. Hogue, who stated her concerns for the neighborhoods impacted by the development.

She said a “door had been opened” when the zoning administrator responded to the residents’ initial request, allowing the neighborhood members to appeal his decision not to investigate.

Nevertheless, board chairman Burchell F. Pinnock noted that “the law was quite clear,” and that Davidson “did his job.”

In a prepared statement after the meeting, seminary spokesman Mike Frontiero said the organization is pleased with the board’s decision.

“Union Presbyterian Seminary has been a cornerstone of the Ginter Park community for over 100 years and we look forward to ongoing collaboration with our neighbors for many years to come,” Frontiero said.

The solution is to have people invest in the area… make it above average condos. The baby boomers are looking for nice one level living and have the wealth you are looking for. They take pride in where they live and are active in the community.

You know, I suspect some of the opposition would be appeased if the Seminary went back to the drawing board and designed something more appropriate in scale and style for the space. But that suburban monstrosity of an apartment building shouldn’t be built ANYWHERE, much less Ginter Park. How about it? Why not try to design something beautiful and contextually appropriate? Would that really be so hard or so burdensome?

Exactly, it looks like ca.2003 Midlothian nonsense, like it would be called The Shoppes at Ginter Parke.

I have followed this story since it began. Coverage never mentions whether or not the seminary pays real estate taxes on this land and, if so, how much. It’s my understanding that religious and philanthropic organizations usually are exempt from taxes to compensate them for the good work they do in the local community. I’m not seeing anything at all in the news these days that makes them look like an appropriate candidate for tax exemption!

I really feel that the opposition to this project by local residents could be somewhat assuaged by having a low-cost, not-for-profit Christian day care or Head Start or preschool on site, to be staffed, at least partially, by work-study seminary students.

It would be a valuable practical adjunct to Christian education students. I feel that transportation and child care are possibly major obstacles to education and employment for local residents.

Plus, it’s hard not to love people when you care for their children, or when other people are caring for your children.