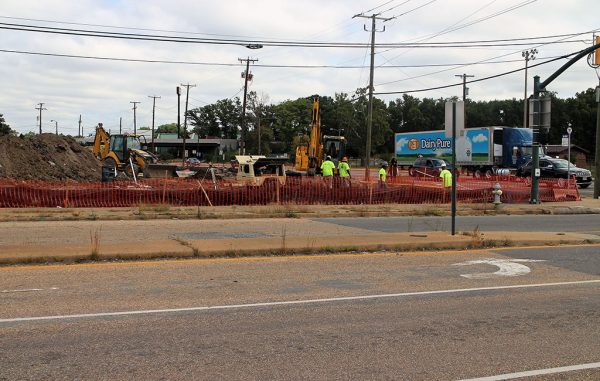 Wawa is under construction at the former Bill’s Barbecue site at 3100 N. Boulevard. (J. Elias O’Neal)

More than a year in the making and with the fate of the nearby Diamond still up in the air, a local developer and gas station/convenience store chain are moving dirt on the eastern edge of Scott’s Addition.

Construction has begun on a Wawa location on the former Bill’s Barbecue site at 3100 N. Boulevard near the intersection of Ellen Road.

Crews received the green light from city hall in January to commence ground work and environmental mitigation, Williams said, in hopes of expediting the opening of the gas station.

Wawa and Williams’ company signed a long-term lease for the 1.44-acre property last year. Williams purchased the property from the former owners of Bill’s Barbecue in 2013 for $1.2 million, according to city property records.

Wawa could not be reached for comment Monday afternoon.

The chain has been growing its store count across the region, now with nearly 30 locations throughout metro Richmond. The Boulevard station would be the second Wawa within Richmond city limits, joining one at 7316 Forest Hill Ave. on the Southside.

In 2014, Williams and a partner formed NB Arlington, which paid an additional $1.3 million to assemble four adjacent parcels north of the Wawa site that formerly housed the Shenandoah Shutters facility at 3108 N. Boulevard. The entity began demolishing that structure in 2016 and now is seeking a retail tenant to lease the 1.4-acre property, Williams said. 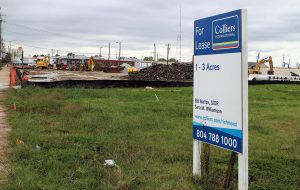 Wawa’s addition to the neighborhood is yet another change to the area around Boulevard and Scott’s Addition. Demand in the city for housing is surging, along with the arrival of breweries, modern office space and restaurants in redeveloped buildings and new construction.

“There’s a bigger picture here that I hope city officials really take the time and research to thoroughly study,” Williams said. “It’s really not just about the Boulevard, it’s the 100 to 200 acres surrounding this site that holds great promise for the entire region and city.”

Williams was referring to city- and state-owned land nearby – including the site that holds the Diamond and the Virginia ABC headquarters across the street – that’s seen as a catalyst for future development.

The city has pegged the Diamond’s land and adjacent city-owned parcels for redevelopment, but first must find space for a new baseball stadium. The ABC site has been suggested, and could be freed up in coming years if the state agency finds a new home. It is officially on the hunt for a half-million square feet of real estate.

“If ABC were to relocate their facilities away from the area then that could be what is needed to really see the area transform,” Williams said. “I think you’ll see the opportunity for mid- to high-rise buildings, anywhere from three stories to seven-story buildings for commercial to residential uses.

“It’s exactly why I purchased the site.”

Jeff Williams has been developing quality projects in the area for thirty years. This one took far too long for approvals. Wawa will bring in millions of revenue from the interstate for gasoline, food and beer sales, and the resulting taxes will be a boon to the City coffers with virtually no service costs.
Congratulations to Jeff and to Bill Mattox for landing this deal for the City.

Are there renderings of what this will look like? I was hoping the city would require the building to abut the street and the parking lot and pumps be on the other side. I like Wawa, but their usual store isn’t a good fit for an urban setting.