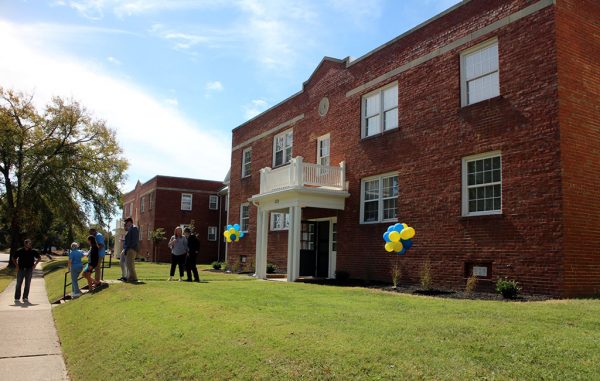 The first two buildings of the 16-building complex have been renovated. (Jonathan Spiers)

A distressed apartment complex in Richmond’s Northside is beginning to turn around with a $15 million upgrade.

Genesis Properties cut the ribbon Friday on the first of several buildings it is rehabbing at the 1940s-era Bellevue Apartments, located along the east side of Chamberlayne Avenue between North and Westminster avenues.

The ceremony marked the completion of the first two buildings of the 16-building complex, much of which was in disrepair when Genesis, with an initial group of investors, purchased it for $1.75 million in a 2015 foreclosure auction.

The two-parcel, 7.5-acre property was sold to a different entity tied to Genesis in January this year for $3.7 million. The new entity, listed in city property records as Code Genesis Bellevue LLC, represents a different group of investors that are working with Genesis on the rehab, said Ed Solarz, Genesis’ development director.

“The property had very high vacancy, had a number of uninhabitable units due to fire and neglect and was still operating on its original boiler systems, which were very costly to operate,” he said.

“We held the property for almost two years and sustained significant operating losses until we were able to recapitalize the property by bringing in investors and selling it to an affiliated partnership in January for its then-appraised value.”

Solarz said the group has put $2.5 million into the rehab so far, with about $51,000 spent on each unit. He said the overall cost of the project is $15 million, with $7.2 million in hard construction costs.

The first of the two 12-unit buildings is fully occupied, and Solarz said work on the rest should finish by mid-summer next year.

Fulton Bank is the equity investor and construction lender on the project, and Freddie Mac is providing a permanent loan based on tax-exempt bonds issued through the Richmond Redevelopment and Housing Authority.

Solarz said Genesis closed on those bonds in January. The project was one of several last year that applied for but didn’t receive tax-exempt bond financing through the Virginia Housing Development Authority. 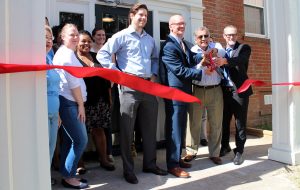 Ed Solarz alongside Chris Hilbert and others cutting the ribbon. (Jonathan Spiers)

Solarz said about 30 of the complex’s 144 units were uninhabitable due to structural problems, fire damage and neglect. Improvements to the units include central air, heat pumps to replace the boiler systems, and new kitchens.

“But we left a lot of the historic fabric intact,” Solarz said, noting state and federal historic tax credit requirements that include restoring the building exteriors to their original, 1946 appearance.

In addition to those credits, the project also includes federal Low-Income Housing Tax Credits, which Solarz said requires all of the units to be leased to tenants earning up to 60 percent of the area median income.

Solarz said 92 percent of the apartments’ existing tenants already qualified. Units range from one to three bedrooms and 540 to 1,050 square feet, with rents from $679 to $899 per month.

The contractor on the project is KBS, and Walter Parks Architects did the design work. Construction started in January, and Solarz expects about 45 percent to be complete by the end of this year, en route to targeted completion next summer.

“There’s one woman who’s lived here 30 years, and she just moved into her new unit. She said, ‘I can’t believe it,’” Hunt said.

Meanwhile, Genesis is pursuing other development opportunities closer to its home base in Manchester. The company is one of two potential buyers in talks with bankruptcy trustees to purchase the Richmond Christian Center real estate portfolio, totaling 16 parcels in the Southside neighborhood.