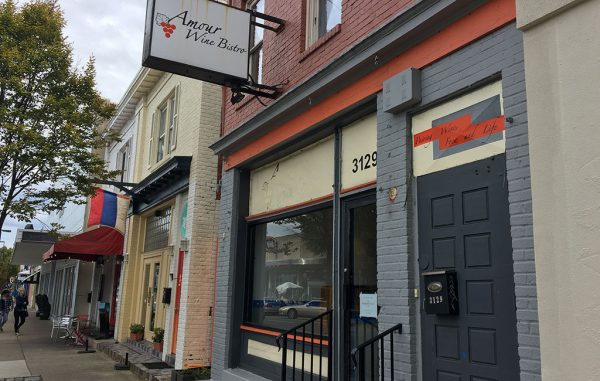 The former bistro at 3129 W. Cary St. will reopen next month as The Broken Tulip Social Eatery. (Michael Schwartz)

A couple new to the Richmond dining scene has bought its way into Carytown.

Crabtree-Logan and Lehrer bought the business from Amour owner Paul Heitz, who moved back to France to be closer to his family. Amour first opened in the space in 2010.

The pair, who used much of their savings, paid $85,000 for the establishment, Crabtree-Logan said, which included much of the restaurant’s furniture, equipment and 900 bottles of French wine collected by Heitz at the location.

Broken Tulip plans to open Nov. 16, Crabtree-Logan said, initially with a reservation-only, multi-course concept that will seat 24 people for two dinner services at 6 p.m. and 8:30 p.m. Thursday, Friday and Saturday. A Sunday brunch will be served at 10 a.m., noon and 2 p.m.

The meals, which may exceed six courses, will cost $50 a person, not including beverages and cocktails, Crabtree-Logan said.

“When we thought of this concept years ago, we knew that we didn’t want it to be a huge restaurant,” he said. “We wanted to people to feel that they were at an intimate family dinner at our home.”

Crabtree-Logan said diners will be seated at one of two community farmhouse tables that seat 12 to encourage strangers to interact over dinner.

“We want it to be more than a place to eat,” he said. “We want people to interact with each other, and we know that the best way for that to happen is over good food.”

In addition to the 900-bottle wine collection, the drink offerings include the Weeping Cherry – made with cherry wood gin, almond liqueur, kola nut bitters and sour cherry juice.

Launching Broken Tulip brings the couple full circle to a longtime goal of owning a restaurant.

Crabtree-Logan and Lehrer met while working in a country pub kitchen in England more than five years ago. A Scotland native, Crabtree-Logan got his start in the restaurant business as a dishwasher in his home country, before taking on the role of chef in restaurants around the U.K.

After quitting her job as director of operations at a Boston M&A firm, Lehrer dove into the food industry in 2012 by publishing a cookbook – “A Feast of Ice and Fire: The Official Game of Thrones Companion Cookbook.” She then left the U.S. for England to train as chef.

“It’s our baby,” Crabtree-Logan said of the new venture in Carytown. “We have put so much into our business, and we hope the city of Richmond will be open to what our pleasure of the table should be.”

So sorry to see Amour close. It has been one of our favorite places with just the right combination of ambience, reliably good food and wines, and excellent service. Many memorable and special evenings there with friends and family. Kudos to Paul Heitz for a great seven year run. It will be interesting to see if the communal concept works — I’ve had some very interesting conversations with persons at adjacent, closely spaced tables over the years, but those occurred out of spontaneous, not forced interactions as is suggested here.