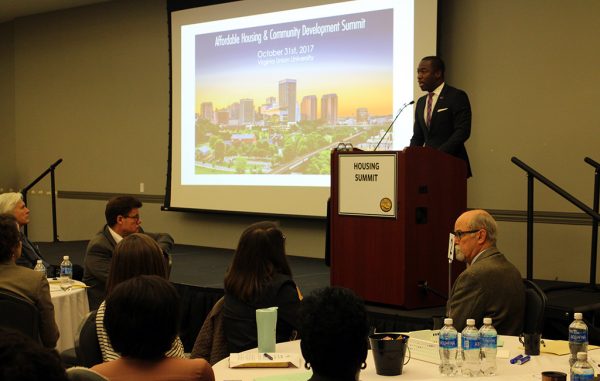 Transforming Richmond’s public housing communities was the challenge of the day at a summit Tuesday that brought together local businesses, nonprofits, government leaders and residents.

More than 150 people responded to Mayor Levar Stoney’s call for a summit on the issue of aging public housing that has long challenged the city. The gathering was announced in the wake of a string of homicides in early September that included four in Richmond’s Gilpin Court housing complex.

Attendees converged on the campus of Virginia Union University to take part in the summit, put on by the Richmond Community Development Alliance and led by the Richmond Association of Realtors and local nonprofit Better Housing Coalition.

Stoney said decentralizing poverty and transitioning to mixed-income housing models is an integral part of addressing violent crime, along with improving education, workforce development and access to jobs via public transit.

“We can do it, but it must be done collectively,” he said. “It’s no accident that in this room, there are folks from both the public and private sectors, residents of our neighborhoods, faith leaders, philanthropists, real estate developers and nonprofits … This effort requires all of us.”

Stoney called the challenge of transforming public housing a top priority because it lays a foundation for achieving other goals. 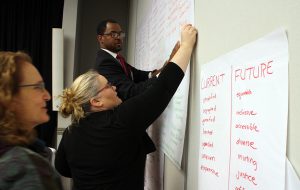 “Our current model isolating our lowest-income residents into aging structures simply does not work,” he said. “These neighborhoods too often have been cauldrons of violence and trauma rather than launchpads for success.”

Assigned to tables strategically to ensure a mix of representation, attendees broke off into groups to fine-tune goals identified from previous plans, such as ensuring the preservation of mixed-income communities by increasing the number of income-based housing units.

The summit concluded with the groups reporting their findings and voting on priorities moving forward.

Laura Lafayette, CEO of Richmond Association of Realtors, said next steps will include revising a draft plan, called “One Richmond: A Housing Plan for the City’s Future,” with input received at the summit and sharing results with attendees in about a month.

Lafayette said results will rely heavily on the participation and support of Richmond’s corporate community.

“The plan says we’re going to make a specific ask of both the corporate entities and the philanthropic community to align their giving with the goal of redeveloping public housing,” she said. “We have significant corporate citizens in this region, and they have a stake in whether or not our city is a vital city.

“We’re asking them, like we’re asking everybody else, if we’re going to be One Richmond, we’ve got to be all-in, and that means finding the resources to move this plan forward.”