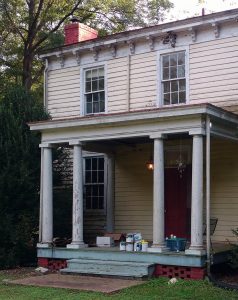 The home at 10423 Cedar Lane was offered for free, but found no takers. (Crescent Group)

An offer to give away an 18th-century house in the path of a residential development has received no takers.

The development group behind Chickahominy Falls, a 400-home, farm-centric development planned for 180 acres in Hanover County, is moving forward with salvaging and demolishing the house at 10423 Cedar Lane after offering it for free to anyone willing to move it.

Mitchell Bode of The Crescent Group, the land acquisition and development arm of Henrico-based Cornerstone Homes, said a legal notice that ran in local newspapers attracted two parties who were interested in preserving the house but determined the structure would not withstand the move.

Cornerstone proposed and is the primary builder on the Chickahominy Falls project.

Called Providence, the two-story, pre-Revolutionary structure, which according to the notice was built in 1767, is on a 26-acre parcel to be included in the development. It’s adjacent to, but not part of, the former homestead of the family of Frank Hargrove Sr., a former longtime member of the Virginia House of Delegates.

The homestead property, with a historic stone house and several outbuildings, is planned to figure prominently as an anchor for the community. County documents describe Providence as likewise historically significant – the site of a Civil War skirmish.

Bode said the offer to unload the structure was required by the county when Chickahominy Falls received approval last year. The notice required anyone interested in the structure to take possession of the property by Nov. 1 and move it by Nov. 30.

“It’s not going to be part of the project, so one of the proffers was to offer it for free to the public, through a regional newspaper for two weeks, for someone to relocate to their property,” Bode said, adding that the project is badly damaged.

With no takers for the house, Bode said Crescent Group is looking to bring in a salvage company to collect historic materials prior to demolition. It has yet to select firms for those jobs. 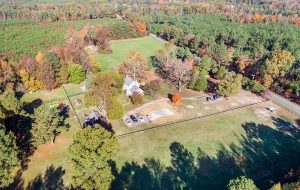 Chickahominy Falls will be a 180-acre, 400-home “agri-community.” (The Crescent Group)

“We’re hoping to save some of the pieces ourselves to utilize in the future clubhouse,” Bode added, referring to one of several amenities planned for the development.

Anchored by a staffed, working farm that residents would support – a concept called “community-supported agriculture” – Chickahominy Falls will include 300 new homes targeted to 55-and-up homebuyers, with an additional 30 homes marketed to millennials and younger families.

Cornerstone and Crescent Group are working on the project with Colorado-based Agriburbia, which integrates farming into developments.

They don’t make houses from the 1700s anymore. This historic gem could absolutely be incorporated into the development – and it’s inclusion, perhaps as a small park – would make the development unique and probably raise property values there. Profoundly disappointing.

why not incorporate this home into the development? what a tragedy to lose a home of
this ancient age.

2 weeks? In a regional newspaper? How would an interested party find this offer in such a small window of time? So disappointing the path that is being taken. Restore the property!!!!