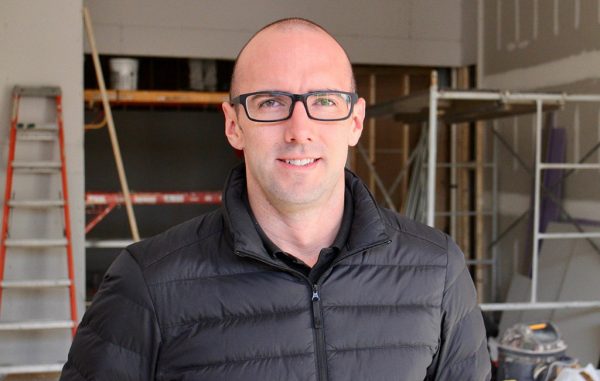 It was a trip to Richmond during the 2015 UCI Road World Championships that helped forge David Hahn’s confidence to take a leap into the city’s restaurant scene.

“You could see the potential,” Hahn said. “You could tell that [the city] was on the cusp of doing something great.”

A year later, the Colorado native left his job with Chipotle corporate as an operations and training manager and bought a building in a pocket of Jackson Ward that’s been a mini-magnet for restaurants.

Next month, Hahn will open Salt & Forge, a 40-seat eatery on the ground level of the two-story building at 312 N. Second St.

Richmond-based Hunnicutt Construction is the general contractor renovating the building, which Hahn purchased for $260,000 in October 2016. The top floor will house two apartments.

Hahn said Salt & Forge will initially be open for breakfast and lunch. Some of its specialties will include breakfast and lunch sandwiches, ranging from its sausage, egg and cheese sandwich made with house-made sausage over a buttermilk biscuit; to its blackberry turkey sandwich, made with herb roasted turkey, blackberry-serrano jam, Brie, fried shallots and arugula on honey wheat.

Jess Widener, the pastry chef at Scott’s Addition restaurant Lunch and Supper, has signed on to provide cookies and brownies, Hahn said.

“Everything in our menu will be made and prepared in house. We want this to be a place where you can receive good, fresh food at a very good price point.”

Chesapeake Bank is financing the project.

While Salt & Forge looks to be a neighborhood destination, Hahn also envisions his restaurant being a launching pad for others, with plans to work with local chefs on pop-ups during dinner hours or on Sundays when its closed.

“Richmond has a very good dining scene for a city of its size,” Hahn said. “There are several young, talented chefs that are ready to break into the industry and start their own places … I want them to hopefully forge a new path for themselves, much like I have started this venture.”

Starting Salt & Forge is a new chapter for Hahn.

After traveling the country for eight years opening stores and training workers for Chipotle, Hahn moved to here with his fiancé, Richmond native Melissa Timberlake.

To learn the ins and outs of the local dining scene, Hahn worked as a line cook at Shagbark in Libbie Mall, all while mapping out his plans for Salt & Forge.

“I’ve been on the corporate side of things and the independent side, so I know what works and what doesn’t,” Hahn said. “I want to make sure that this is a successful concept.”

With Salt & Forge’s opening eminent, Hahn said he is exploring other restaurant ventures in the Richmond area.

“There is room for growth in Richmond,” he said. “This is becoming a food destination, and I’m glad to be a part of it, and want to help it grow.”

This is awesome! The momentum is really building on that street. Can’t wait to check it out.

On that block (google image from May 2017 and) not one store front is an open place on the even side from Broad to Marshall? Odd side places last maybe one year and then close. No dinner service and your a neighborhood spot? Ettamae, Thai Corner, Bodizza all closed quickly, CulturedSwine and IdleHands moved after just 1 year in the area. Big Herms which is across 2nd is great but open 11-5:30 weekdays only. Big Momma by the Hipp is only open Sundays. SpeakEasy at Hipp has differing hours almost daily. Wish him the best but by summer 2019 I… Read more »

Michael,
Send me an email at [email protected] because I would love to invite you in to give Salt & Forge a try on me when we open. I think you’ll change your outlook at that point.

You are very kind, David. Richmond is full of skeptics, especially when looking at neighborhoods other than their own. I have full faith you will be an asset and successful in our community! Viva Jackson Ward!

I plan to try the place and I have no doubt on the concept. I know the owner of Salt and Time in Austin. I question the location and calling 2nd Street a “mini-magnet” when very little lasts two years in that area. In the last 5 years I can name (and bet a lot) more than a dozen places have closed up or moved out. Jackson Ward demographics are way too small to have many “neighborhood” places. And east of 1st Street along Broad is still a sketchy location as not one store front (or upper floor apts) exists… Read more »

Nice! Welcome to the hood, excited to have more breakfast/lunch options in the area. Wishing you tons of success.